Six Facts The MSM Isn’t Reporting About The Jerusalem Issue 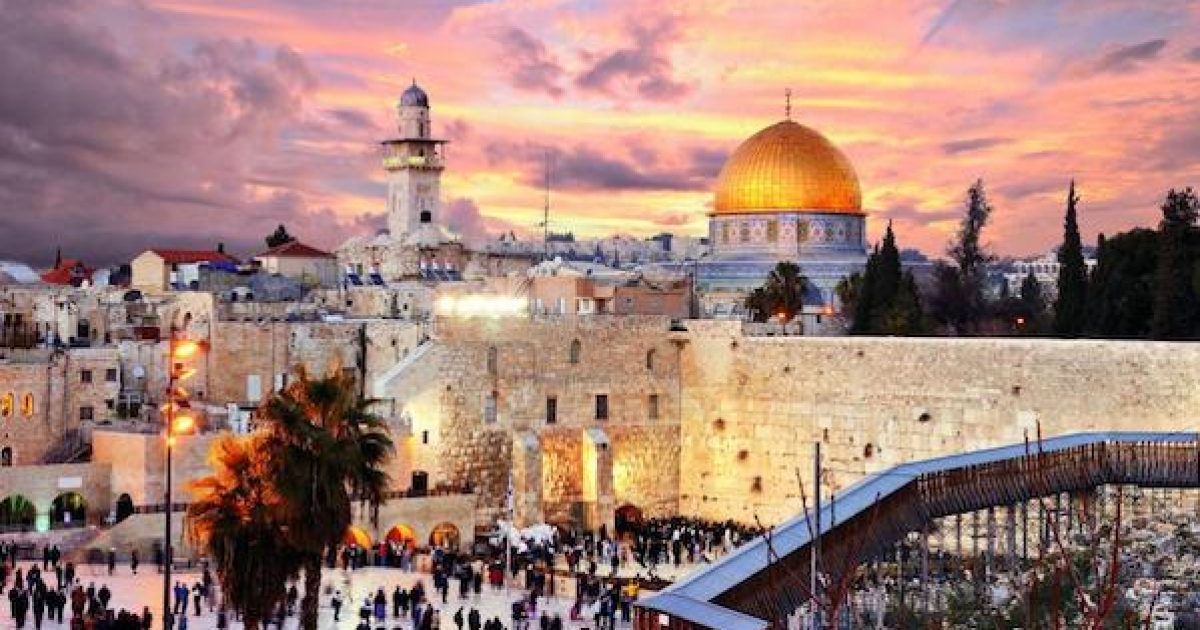 Facebook Twitter Flipboard
Finally! After almost 70 years the United States has finally recognized the facts on the ground, that the capital of Israel is Jerusalem.

Palestinian President Abbas said, “Any American step related to the recognition of Jerusalem as the capital of Israel, or moving the US embassy to Jerusalem, represents a threat to the future of the peace process and is unacceptable for the Palestinians, Arabs and internationally.”

Peace process? What peace process? Does the Palestinian mean the videos running on the official Palestinian Authority TV station telling their citizens to kill Jews? Or perhaps he is talking about his government encourages terrorism by paying blood money to terrorists or their families. Maybe he means that everytime the negotiations get close to an agreement the Palestinian side pulls out of talks? Arafat did it and so did Abbas.

Of course, the mainstream media is treating the president’s announcement as if it was going to cause Armageddon (which is named after another area in Israel, Har Megiddo).  Bashing Israel and bashing President Trump are favorite targets of the media so they file their reports without any perspective. For example, they omit the fact, that Jerusalem has been the capital of Israel longer than there’s been a Palestinian issue. Israel has controlled parts of Jerusalem since 1948, and east Jerusalem, as well as the entire area known as the “West Bank”, was part of Jordan until 1967.  Perhaps this truth is ignored dure media’s Democratic Party skew and the Democrat’s anti-Israel policies.

Oh and the US wasn’t first, Russia recognized Jerusalem as Israel’s capital this past April.

They were quiet about Putin’s recognition but Israel’s neighboring Muslim nations and most of Europe are having a fit about Trump’s recognition which probably means the Democratic Party is going to call for an investigation into the collusion between Israel’s Muslim neighbors and Europe, with Putin for the purpose of throwing the American election towards Adlai Stevenson or Harold Stassen.

While the Democrats are investigating their latest political hit job, allow me to suggest you take a look at the six facts below that the MSM doesn’t tell you about the Jerusalem controversy.

1) Jews have always been a large (even dominant) segment of the Jerusalem Population: During the period of 135 CE when the Romans kicked the Jews out, through 1948 when Jordan occupied the eastern part of Jerusalem, there were large populations of Jews in Jerusalem. In fact, beginning with the earliest information available (1844), there were more Jews in Jerusalem than any other faith.

2) Jerusalem has been part of Israel since 1948. The Arab Nations aren’t objecting to Israel’s presence in the part of Jerusalem controlled since June 1967, they are objecting to any Israeli presence in Jerusalem, even the section agreed to as part of the 1949 Israeli/Jordan armistice. Because of the rejectionism by Israel’s neighbors, the United States has recognized Jerusalem as Israel’s capital.

“On November 30, 1948, following the cessation of the battle between the two armies in Jerusalem, two officers – Lt. Col. Moshe Dayan of the Israeli army and Lt. Col. Abdallah A-Tal of the Jordanian army – drew in thick wax pencils an inaccurate cease-fire line on a map of Jerusalem. This line, including the No Man’s Land between the two sides, was later included in the Israel-Jordan Armistice Agreement of 3 April 1949. The City Line divided Jerusalem between Israel (in the western part) and Jordan (in the eastern part, including the Old City and the Temple Mount) for 19 years, until The Six Day War in June 1967 when Israel reunited the city. 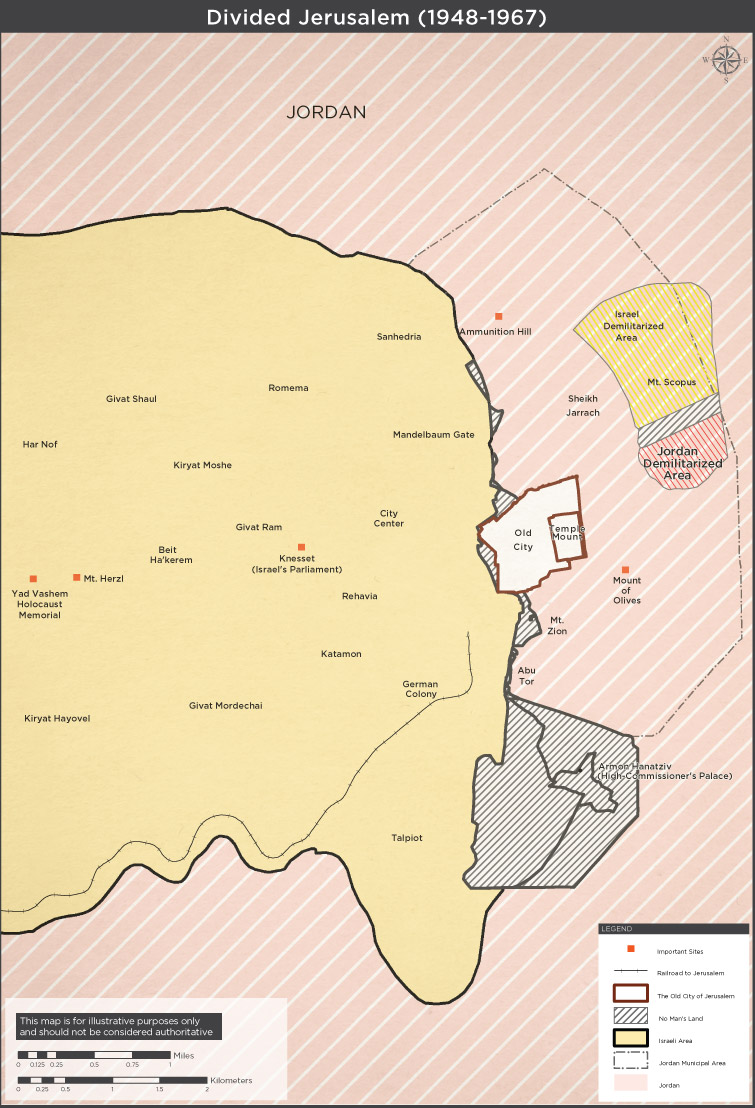 3) Under Arab rule holy sites were not protected. Only since 1967 when Israel took control of all of Jerusalem have the holy sites in the eastern part of the city were protected and open to all faiths. Between 1949 and 1967 the Jordanians breached their commitment (in the Armistice Agreement) to allow free access of Jews to the holy sites, mainly to the Western Wall and to the cemetery on the Mount of Olives. They also desecrated the Jewish holy sites. 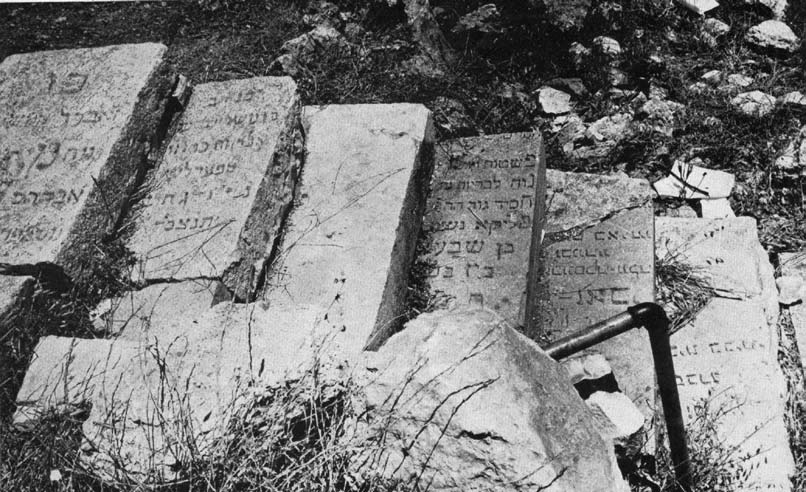 4) The Official 1925 Supreme Moslem Council (Wakf) Guide Book To Al-Ḥaram Al-Sarif, recognized the presence of the Jewish Temples atop the Mount.  Shown below is paragraph two on page four, which says, “It’s [the Temple Mount] identity with the site of Solomon’s Temple is beyond dispute.”  Now 90 years later the head of the Wakf is disputing it.

5) The location of the Farthest Mosque in Jerusalem is a modern construct. The Arab Mulisms based their claim on Jerusalem based on a line in the Quran that says “Glory to (Allah) Who did take his servant for a journey by night from the Sacred Mosque to the farthest mosque” Modern Muslims claim that the Temple Mount in Jerusalem is the farthest Mosque. However ancient Muslim philosophers reject that notion:

Very roughly speaking, what Jerusalem is to Jews, Mecca is to Muslims – a point made in the Qur’an itself (2:145) in recognizing that Muslims have one qibla and “the people of the Book” another one. The parallel was noted by medieval Muslims; the geographer Yaqut (1179-1229) wrote, for example, that “Mecca is holy to Muslims and Jerusalem to the Jews.” In modern times, some scholars have come to the same conclusion: “Jerusalem plays for the Jewish people the same role that Mecca has for Muslims,” writes Abdul Hadi Palazzi, director of the Cultural Institute of the Italian Islamic Community.

6) Arab Leaders Ignored Jerusalem Until the Six Day War. They don’t really care about the holy city, they just don’t want the Jews to have it.

Under Jordanian rule, east Jerusalem became an isolated provincial town, less important than Nablus. The economy so stagnated that many thousands of Arab Jerusalemites left the town: while the population of Amman increased five-fold in the period 1948-67, that of Jerusalem grew by just 50 percent. To take out a bank loan meant traveling to Amman. Amman had the privilege of hosting the country’s first university and the royal family’s many residences. Jerusalem Arabs knew full well what was going on, as evidenced by one notable’s complaint about the royal residences: “those palaces should have been built in Jerusalem, but were removed from here so that Jerusalem would remain not a city, but a kind of village.”  East Jerusalem’s Municipal Counsel twice formally complained of the Jordanian authorities’ discrimination against their city. Source: Meron Benvenisti, Jerusalem: The Torn City (Minneapolis: University of Minnesota Press, 1976), p. 28.

Perhaps most insulting of all was the decline in Jerusalem’s religious standing. Mosques lacked sufficient funds. Jordanian radio broadcast the Friday prayers not from Al-Aqsa Mosque but from an upstart mosque in Amman. (Ironically, Radio Israel began broadcasting services from Al-Aqsa immediately after the Israel victory in 1967.) This was part of a larger pattern, as the Jordanian authorities sought to benefit from the prestige of controlling Jerusalem even as they put the city down: Marshall Breger and Thomas Idinopulos note that although King ‘Abdullah “styled himself a protector of the holy sites, he did little to promote the religious importance of Jerusalem to Muslims.” Jerusalem’s Holy Places and the Peace Process (p. 15)

Nor were Jordan’s rulers alone in ignoring Jerusalem; the city virtually disappeared from the Arab diplomatic map. Malcolm Kerr’s well-known study on inter-Arab relations during this period (The Arab Cold War) appears not once to mention the city, No foreign Arab leader came to Jerusalem during the nineteen years when Jordan controlled East Jerusalem, and King Husayn (r. 1952-99) himself only rarely visited. King Faysal of Saudi Arabia spoke often after 1967 of his yearning to pray in Jerusalem, yet he appears never to have bothered to pray there when he had the chance. Perhaps most remarkable is that the PLO’s founding document, the Palestinian National Covenant of 1964, does not once mention Jerusalem or even allude to it. (source: Malcolm H. Kerr, The Arab Cold War: Gamal ‘Abd al-Nasir and His Rivals, 1958-70, 3d ed.

Here’s the bottom line the objections to the US recognizing Jerusalem as Israel’s capital have nothing to do with the Muslim faith or history, and everything to do with the fact that just like the rest of Israel, if the Jewish State has it, the Palestinians want it.

UPDATE: The US Consulate in Jerusalem has issued a warning to  US families in the Area: