Are MS-13 Gang Members That Bad? 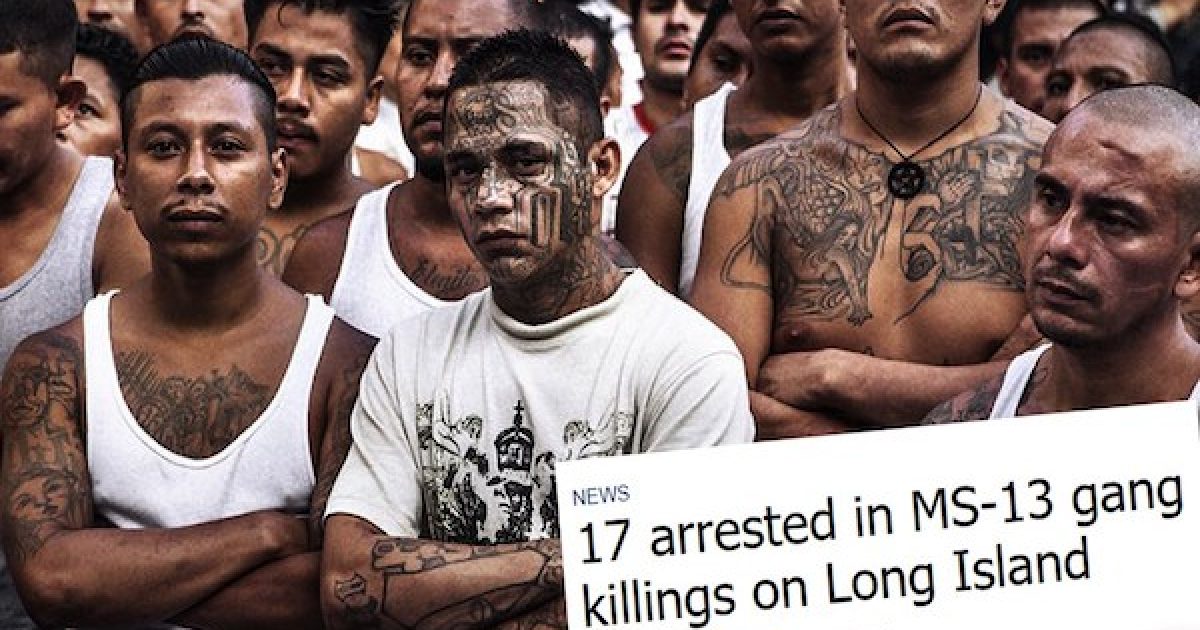 MS-13 has been in the news a lot over the last two years, thanks mostly to President Trump’s laser-focus on destroying the gang’s presence in the United States. For those who may not know, this gang has become the most feared and violent street gang in America, and they’ve infiltrated our communities mostly through illegal immigration.

MS-13 is a Salvadoran gang born in Los Angeles in the 1980’s but populated today by Central American criminals. The gang’s penchant for violence is so infamous that the Mexican cartels even hire them out as enforcers in their continually escalating drug wars with each other and with the civil governments.

Even more terrifying is the fact that the gang has not just found its way into our cities – like New York and Los Angeles – but that they’ve also wormed their way into suburban and rural communities as well.

President Trump singled out MS-13 during his campaign for the White House, tying the group’s rise to the lax illegal immigration enforcement of the Obama administration, and the DOJ’s refusal to take hard measures against the criminal activity of illegal aliens.

He’s continued using this murderous gang as the central figure in his fight against rising gang crime, and while you’d think this would be an issue that both the left and the right could unite around… it hasn’t been. In fact, Democrat leaders have been heard defending the thugs of MS-13 and even arguing that Republicans are worse than these horrible animals.

Ben Shapiro called the left’s reaction to the MS-13 conversation “Trump’s magic power”! This is spot-on:

Tucker Carlson ripped the left for caring more about politics than defending our streets from violent criminals:

“Why would the left be defending the country’s most violent street gang? Trump has made them irrational. That is part of it. But the left also senses a threat to its basic worldview. MS-13 is a living reminder that the left’s position on immigration is fundamentally a lie. The media tell you every day that every immigrant, legal or not, is a future brain surgeon or tech company founder. Therefore, immigration controls are unnecessary.

If they admit MS-13 is bad and must be stopped, they’d have to also admit that when some countries send their people here, they aren’t sending their best. A lot of immigrants are great, for sure. Some are rapists, though. Some joint MS-13. That’s just true. They aren’t all the same because people aren’t all the same. That’s the point of our immigration law. They’re not the same. We should sort the good from the bad.”

VICE News even tried to do a piece showing the futility of President Trump’s focus on MS-13, but former gang members explained why the President was right.

When the VICE reporter asked a few former members why President Trump had singled out MS-13, they answered honestly, and with terrifying clarity.

They’re the most vicious…

The White House also stood up against the Democrats who have been defending MS-13 and explained why they were “animals” and why America needs to fight back against the plague of gang violence.

From the White House:

WHAT: The violent animals of MS-13 have committed heinous, violent attacks in communities across America.

Too many innocent Americans have fallen victim to the unthinkable violence of MS-13’s animals.

At the State of the Union in January 2018, President Trump brought as his guests Elizabeth Alvarado, Robert Mickens, Evelyn Rodriguez, and Freddy Cuevas, the parents of Nisa Mickens and Kayla Cuevas.  Police believe these young girls were chased down and brutally murdered by MS-13 gang members on Long Island, New York, in 2016. Suffolk County Police Commissioner stated that the “murders show a level of brutality that is close to unmatched.”

In Maryland, MS-13’s animals are accused of stabbing a man more than 100 times and then decapitating him, dismembering him, and ripping his heart out of his body. Police believe MS-13 members in Maryland also savagely beat a 15-year-old human trafficking victim. The MS-13 animals used a bat and took turns beating her nearly 30 times in total.

In Houston, Texas, two MS-13 members were charged after kidnapping and sexually assaulting one girl and murdering another. The two MS-13 animals laughed, smiled, and waved for cameras in court as they faced the charges.

New York communities have suffered tremendously from the abhorrent violence of MS-13. Nearly 40 percent of all murders in Suffolk County, New York between January 2016 and June 2017 were tied to MS-13.

In January 2017, MS-13 members were charged with killing and hacking up a teenager in Nassau County. MS-13’s animals reportedly saw the murder as a way to boost their standing in the gang. In April 2017, police believe four young men were brutally murdered by MS-13 animals on Long Island. One victim was a young man in town visiting family during an Easter week vacation. Just last month, in April 2018, MS-13 reportedly called for its members on Long Island to kill a cop for the sake of making a statement.

WHY: MS-13 is a transnational gang which follows the motto of “kill, rape, control” by committing shocking acts of violence in an attempt to instill fear and gain control.

MS-13 is a transnational gang that has brought violence, fear, and suffering to American communities. MS-13, short for Mara Salvatrucha, commits shocking acts of violence to instill fear, including machete attacks, executions, gang rape, human trafficking, and more. In their motto, the animals of MS-13 make clear their goal is to “kill, rape, control.” The gang has more than 10,000 members in the United States spreading violence and suffering.

Recent investigations have revealed MS-13 gang leaders based in El Salvador have been sending representatives into the United States illegally to connect the leaders with local gang members. These foreign-based gang leaders direct local members to become even more violent to control more territory.

This really shouldn’t be all that difficult.

This really shouldn’t be all that controversial.

President Trump isn’t dehumanizing MS-13, the gang has already dehumanized themselves. They commit acts of horrific violence against innocent people every single day, proving that they care nothing for life and that they do not respect the most basic constructs of the social contract that the rest of us in civilized society adhere to. Just by joining MS-13, or a similar criminal gang, these people that our President calls “animals” have placed themselves outside of our society.

Yes,  members of this gang are really animals, President Trump didn’t make them animals, they did that to themselves.

Note From Jeff: I’ve been familiar with these animals long before the President brought them up.  They have taken over too many neighborhoods near mine.