This afternoon the President of the United States tried one again to mislead the public about domestic oil production and how much untapped oil is left in the ground.  He said that domestic oil production is at the highest level in seven years and he indicated that American reserves are not adequate to help the US reduced its dependence on foreign oil. If Congressman Wilson was in the audience he might have repeated his famous shout “You Lie.”

Obama commented that US oil production was at its highest point in seven years. That was both incorrect and misleading.  Daily average production of oil last year 5,361,000 barrels/day the best since 2005’s 5,419,000/day. The real misleading fact about his statement, is that neither year is even close to levels seen only ten years before when production was 20% higher.

The President mentioned 35 offshore contracts were awarded, hiding the fact that off shore oil production has been way down since 2005, and that production took a big drop as soon as Obama took office (even before BP)

Source for both charts above the US Energy Information Administration.

Domestic Supply The President grossly undersold America’s oil supply saying that we only have 2% of the worlds supply. OK he didn’t undersell, he lied big time. The number is America’s proven reserves where we are already drilling. It does not include the 10 billion barrels available in the Arctic National Wildlife Refuge. It does not include most of the 86 billion barrels available offshore in the Outer Continental Shelf, most of which President Obama has placed under an executive drilling ban. And it does not include the 800 billion barrels of oil we have locked in shale in Wyoming, Utah, and Colorado. Those shale resources alone are actually three times larger than the proven reserves of Saudi Arabia, so the claim that the U.S. only has 2% of the world’s oil is clearly false.

A 2009 study by the non partisan Congressional Research Service (CRS) sheds light on America’s energy resources. It shows show the U.S. supply of recoverable oil to be 167 billion barrels of oil, the equivalent of replacing America’s current imports from OPEC countries for more than 75 years. And that’s just the oil, when you include gas and coal, the U.S.  has energy reserves the equivalent of 1.3 trillion barrels

On top of that there is more Oil to find. For example, in 2008 the US Geological Survey announced that the Arctic holds about 90 BILLION barrels of Oil, more than Nigeria, Kazakhstan and Mexico combined about one third of the reserves are in Alaskan waters.  In the graph below the darker the blue the better the probability of Oil. In the map below the darker the green the more oil. The Dark green area between five and six o’clock is in Alaska territory, which is just under 30 Billion Barrels of Oil. And just like anything else in this world, politics will play a huge part in how soon we can get to it 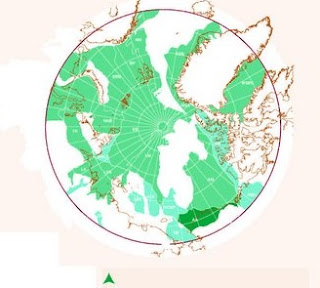 Oil Companies Are Not Using The Leases They Have.

The President said the “Industry holds leases on tens of millions of acres both offshore and on land where they aren’t producing a thing.” and he said he wants to “encourage companies to produce [on] the leases they hold.”

If Obama is telling the truth, those oil companies must be run by idiots, paying for leases but not getting the product out of the ground so they can make money. Thankfully for those who hold stock in big oil, it isn’t that the oil companies are run by idiots its that the President thinks the American people are idiots and will believe that particular pack of lies.

A lease is for exploration and production, not just production, and because oil is not equally distributed across the globe, one parcel of leased acreage may not hold any oil. Moreover, due to government red-tape, which has gotten more complected under the Obama administration, it can take years for companies who own a lease to complete their exploration activities. To get to the production phase, it could take as long as ten years. Ironically, President Obama wants to tax companies for not producing on their leases, even if the federal government’s refusal to grant permits is the reason why those companies are not drilling.

The truth is, ever since Barack Obama took office the President has been making it more difficult to exploit our own energy resources, one of his first actions was having the Secretary of the Interior cancel leases to exploit our shale oil reserves in Utah. It seems as if President Obama’s energy policy consists of making America more dependent on foreign oil.