American Voters Are Moving To The Right 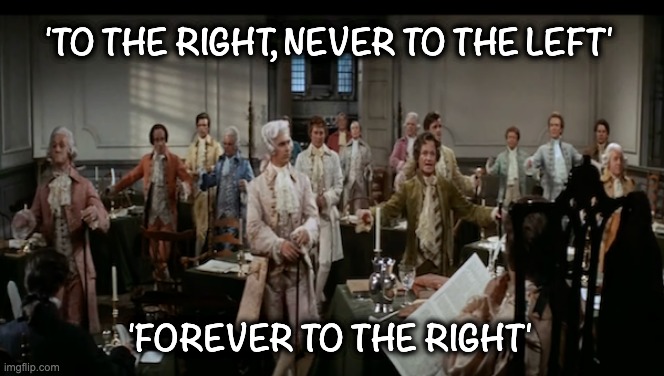 moving to the right

One of my favorite songs in the musical 1776 is called Cool, Cool, Considerate Men. Parts of the song describe political trends in America today:

The left-leaning Morning Consult has reviewed five years of data from 8.6 million participants and found trends that voters are moving rightward in political ideology.

“The left is losing the battle for the minds of the American electorate, Morning Consult research shows, with voters decreasingly identifying as liberal in recent years,” Morning Consult political reporter Eli Yokley said in his report. “But that doesn’t mean the country is lurching to the right.”

“Instead, an increase in the share of Americans who identify as moderate, or who are uncertain about where exactly they stand on the ideological spectrum, reveals a growing and electorally decisive center that is discontented with either side’s extremes,” Yokley added.

Still, even the survey finds the number of self-identified conservatives increased slightly. Meanwhile, those who claimed to be liberal decreased. Self-professed liberals went from 34 percent to 27 percent over the past five years.

“Even as Democratic voters drift toward the middle, the data shows that the Republican Party’s adherents are shifting further to the right — and it’s happening quickly,” Yokley added.

The study added, “Over the same time period in which the share of Democrats identifying as liberal dropped from 60% to 55%, the share of Republicans who said they were conservative increased from 70% to 77%. What’s more, Republican voters (32%) are far more likely to identify as ‘very conservative’ than Democrats (19%) is to say they’re ‘very liberal.'”

Apparently, all the momentum is edging toward the right, and that’s a good thing for the American Republic.