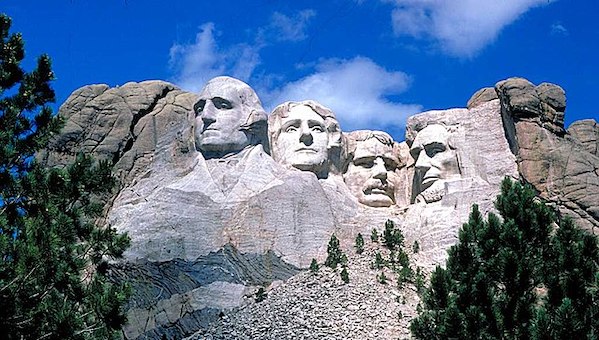 Facebook Twitter Flipboard
Another irascible ESPN employee worth tens of millions recently decided to bash the country that made him rich despite never working a real job in his life.
d
A couple days ago, Jalen Rose recorded an incoherent video of himself regurgitating clichés someone told him to have about Mount Rushmore. The rant about native Americans, Columbus, and stolen land came from nowhere and made little sense. Unlike how ESPN treated its few right, leaning, employees, they surely will not reprimand Rose and may even applaud the idiocy.

This is what ESPN became years ago, and it’s only gotten worse.

When I was younger, I looked forward to Chris Berman, Tom Jackson, and others presenting highlight reels following the day’s NFL games. This was before you could look up scores on the internet, so having a full roundup was useful. Their commentary was entertaining and included Berman’s hilarious player nicknames.

I didn’t know the political leanings of these fellas, and surely I didn’t care. I did not turn on ESPN so people who likely had less insight than I could pontificate about unrelated issues; I was tuning in for a good show put together by football experts.

Unfortunately, ESPN long ago abdicated being a sports network and is now more akin to MSNBC both in content and personnel.

Some still refuse to acknowledge that ESPN doesn’t really cover sports anymore but instead presents hyper-political stupidity that now passes for “sports” commentary.

It has hired a cabal of sheltered Syracuse and Northwestern graduates to comment and work with former players who are not deep thinkers about anything but sports.

I have not watched ESPN in decades since I can get better baseball highlights from MLB Network or the MLB app. I only turn on any channel in the ESPN family for niche sports like college hockey and baseball.

The only other reason you see ESPN in the headlines nowadays is when they publish or air execrable anti-American content on July 4.

On to Rose’s content, considering the Black Hills are possibly my favorite place in America and having lived from 2010-22 in adjacent states, I know it well from more than a dozen visits. Rose, in his life of coastal opulence and insularity, does not.

You can see cars from nearly every state at Mount Rushmore as happy families make a stop on summer journeys. And guess what? None think less of this American symbol of greatness because of how, why, or when the land was acquired.

Do comrades who admire Karl Marx do so specifically because he was a raging anti-Semite and racist who hated blacks?

This controversy, of course, has nothing to do with Rushmore, Marx, or even blatherskites like Rose. The real point is that complaints from unintelligent cowards who barely finished high school, like Rose and Lebron “Peking” James, are substanceless and not about anything that matters.

Like the odious Jemele Hill, they’re bored, insecure, and seeking attention, so they regurgitate noxious claims that misinterpret history in the most deceitful way possible. That’s my generous angle.

At worst, these privileged morons hope to bully people out of loving the greatest country on earth, one formed upon the strongest ideals of equality, self-government, and the rule of law.

ESPN is a failed network that has shredded viewers for years, and it didn’t have to be this way.

Imagine had they not embraced a vacuous brand of woke politics at the expense of sports coverage? Or perhaps it makes sense since ESPN sits under the corrupt corporate umbrella of Disney, a far left-wing company guilty of appalling behavior in Florida.
But sure, keep both afloat with money for their inane “streaming services.”
dd
dd
A.J. Kaufman is a columnist for Alpha News and here at The Lid
dd
dd
dd
Facebook Twitter Flipboard