The Most Anti-Semitic Country Award goes to? 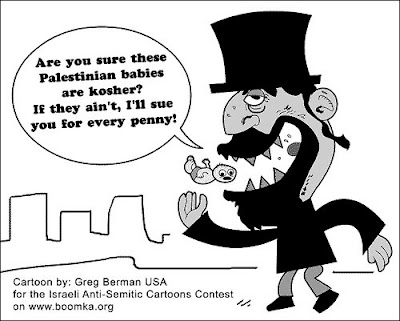 Mirror Mirror On The Wall
Which Country is the Biggest Jew hater of ALL?


Israel National News (Arutz Sheva) is hosting their fourth annual Jerusalem Conference. Todays discussion, Anti Semitism. There seems to be a major debate going on. Experts feel that it is the home of Abu Mazen, the PUTZ (Palestinian United Terrorist Zealots). Others say its Egypt, the original source of much of the Mid-East Jew hatred. Other’s see it more of a European problem because of the growing Muslim population. The real answer is even scarier. Hatred of our people is everywhere. The Jewish people are facing a three-front war for survival, against Israel, against the rest of world Jewry and from within. The real question should be, What are we going to do about it?

Palestinian Authority is Capital of Anti-Semitism’

Middle Eastern affairs expert Dr. David Bukai of Haifa University, speaking Monday at a Conference session on anti-Semitism in Europe and the Islamic world, said that anti-Semitism in Egypt and particularly in the Palestinian Authority is much more worrisome and significant than in Europe.

Bukai compared the situation today with that of the Nazi days: “The world’s indifference to the Iranian threats is exactly as it was towards Hitler’s threats. Academia in those days supported the Munich agreement of capitulation – and today it’s the same story, with appeasement once again leading the way… Extremist Islam wants to bring the modern world back to the 7th century. They say this openly – not like the Nazis, who tried to hide their intentions.”

“However,” Bukai said, “Iran is the wrong target for the war against anti-Semitism. Iran is not motivated by anti-Semitism; it wants to turn Iraq and Lebanon into Shiite countries, it wants to activate Hamas and Hizbullah, it wants to strengthen the militant line in Gaza and in southern Lebanon – but all this has nothing to do with anti-Semitism… The main dispute in the Middle East is between the Shiites (10% of the world’s Moslems) and the Sunnis and the so-called moderate nations. The Shiites are more threatening to Saudi than to Israel; Israel is their excuse.”

Other speakers did not agree; see below.

Bukai explained why it is that the radical secular left and radical religious Islam have joined up with each other: “[The late Italian journalist and author] Oriana Fallacci gave three reasons: 1. They are both anti-American. 2. The left no longer has an ideology of its own. 3. There is no more proletariat, and Moslem immigrants in Europe have taken their place. But the real explanation lies elsewhere. The reason is that in truth, the left is very religious – it believes in absolute truth, and absolute good and bad, just like Islam, and it posits that there are believers and those who are not believers; both the left-wing and Islam are churches – they both think they’re always right, and they never apologize; they both want a world based on their vision of truth, backed up by verses of Marx and Muhammed; they both want to control how we think, and punish those who do not fall in line; both are autocratic and, actually, anti-liberal.”

Caroline Glick Explains Europe’s Anti-Semitism
Columnist Caroline Glick, Deputy Managing Editor of the Jerusalem Post, said: “Some feel that European anti-Semitism is the same as that in Iran, but I don’t think so. We must distinguish between interests and sentiments. I disagree with Prof. Bukai in that I think there is some anti-Semitism in Iran… In Europe, too, there has been a sharp jump in anti-Semitism – some of it is traditional, built-in to their structure and society, with roots in Christianity, etc. Beyond this, there is great hatred towards the US and Israel – possibly a feeling of jealousy and/or wanting to show that they are strong on their own, etc. We must realize that it’s not all anti-Semitism, but rather a question of European interests. We have to always ask ourselves how Europe sees its interests, and realize that anti-Israeli tendencies there stem to some extent from internal political considerations, based on their growing Moslem population. They have their own economic problems that they have to deal with…”

“People – and certainly politicians – are afraid to make any form of criticism against Islam in Europe,” Glick explained. “For instance, there are two Cambridge University students who are in hiding because of a satirical piece they wrote against Moslems… Europeans have built many monuments to the Holocaust, and are always talking about learning the lessons of the Holocaust, but the fact is that they are not learning the right ones. Germany’s Foreign Minister Joschka Fishcher says that the previous generation was militaristic, and that the present generation must be pacifistic. But that of course is not a correct analysis of the problem; everyone was militaristic at that time – but Germany’s problem was that they were simply evil; we, at least, have to understand that.”

Media is Derelict in not Explaining or Warning
Glick had strong criticism of Israel’s media for “sitting on the edge of a volcano and ignoring it, not telling us what is going on, not educating us, not warning us about what is happening. In general here, public discourse is very superficial, if at all, and looks only at the tip of the iceberg. For instance, we are told that because of a woman who spoke not nicely to an Arab woman in Hevron, that’s why Europe is giving hundreds of millions of dollars to terrorist elements in Ramallah and Gaza. We are told that because of a few youths on an isolated hilltop outpost, this is why Europe is not preventing Iran from attaining nuclear power. These are absurd claims, with no logic and no cause and effect – but this is what we are fed. Part of the problem is that the EU itself perpetuates this situation by giving hundreds of millions of dollars to Taayush and Peace Now and the Geneva initiative and others like this, in order to make us not understand what is truly going on.”

“But we must realize that their hostility comes [not only] because of anti-Semitism, but also because of their desire for cheap oil and for their own economic interests – and we must explain to them that their real interest is to fix their own societies and turn the jihad back against itself. Most people, in the EU just as here in Israel, are concerned about themselves and their welfare, and we must remind them of that. They don’t want an Islamic take-over, and we must tell them the truth – that the reason that Islam has taken over Europe is the same as why Israeli-Arabs here feel that they can violate the law: Because we have allowed foreign ideologies to take over our public arena. If we realize and are smart enough to know our ideologies and to show what we have in common with Europe, then even if they hate us, our mutual interests will take the day.”

Prof. Westreich: Muslim Influence Growing in Europe
Prof. Robert Westreich of Hebrew University, the Chairman of the International Center for Anti-Semitism Research, said, “It appears that there has been a rise in anti-Semitism over the past six years, but it must be said that it is not everywhere. In addition, there is a cyclical nature to these increases in anti-Semitism… I must say that I was in China recently, and I did not find any negative preconceived notions against Jews – showing that they don’t have the same tendencies as the Christian-western world. The same is true in India. So we see that this mental illness did not infiltrate every single corner of the world. This is just a small consolation, of course, because we know how dangerous it is…”

Relating an incident that occurred just recently, Westreich said, “A university in Leeds, England invited a Jewish convert to speak about Islamic anti-Semitism – but suddenly, just a day before the address, the university canceled his appearance, citing security concerns. I know personally that this was just an excuse, and that in fact the university simply gave in to pressure from the local Muslim population. This is just one example of many. It is the result of a process of the last 30 years, involving of course a great increase in Moslems in Europe, as well as a feeling of defeatism that is taking over… Essentially, they don’t want the West to win [in its struggle against Islam]. Prime Minister Tony Blair was forced to quit because of the war in Iraq – and also because of his support for Israel in the recent war with Hizbullah… The mainstream [in England] is very quick to blame US policy and Israel for various problems. I’ve even heard people say there that the very formation of Israel was a mistake… The dominant opinion is that if you mention Islam as the reason for it, you are guilty of racism.”