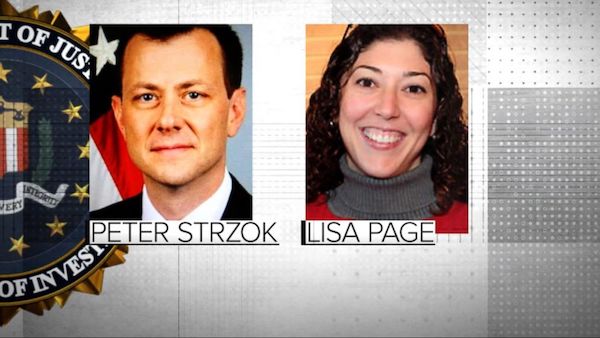 In the last week, we’ve had occasion to give James Comey’s claims about the FBI’s communications intercepts of Sergey Kislyak and Michael Flynn a good fisking. more Strzok-Page texts

Comey testified to the House in March 2017 that after Russia was informed of new sanctions imposed by the Obama administration (on 29 December 2016), the intelligence community was tasked to figure out why the Russians showed little reaction, and that tasking “turned up these calls [between Kislyak and Flynn] at the end of December, beginning of January.” (See link to my 21 May post below.)

The folksy wording of Comey’s statement rings false to me, with its implication that the phone call intercepts had to be hunted for and “turned up.”  That’s the point I made on 21 May:

This account doesn’t parse.  Either the FBI counterintelligence folks are monitoring Kislyak, or they aren’t.  If they are, then the FBI chain of command – alerted to the national priority of watching for Russia’s reaction to sanctions – would know within an hour or two, at most, about each one of Kislyak’s phone calls with Flynn that day.

The FBI would have known about those phone calls before the first opportunity to put out the community-wide tasker in the presidential daily brief (PDB), which is how subsequent reporting has indicated it was disseminated.  The first PDB after the phone calls was on 30 December 2016 (a Friday).

It’s important to emphasize again that some of my skepticism about this story comes from the fatuity of the overstressed plot point about monitoring intelligence on Russian activities, to see how the Russians responded to the sanctions.

At most, this would be a routine intelligence measure.  An administration with a grain of expertise and commonsense would already be pretty sure how the Russians would respond.  And frankly, they wouldn’t have been terribly worried about it, all things being equal.  The U.S. was expelling Russians from the country, yes, but that happens from time to time with Russia, given the regime’s penchant for destructive behavior.  It would have been absurd to be on pins and needles about what Moscow was going to do.

It would also have been absurd to be “confused,” as Comey put it in his House testimony, that Putin did so little in response.  (It would have been idiotic to be upset that Putin’s reaction was muted, which has long been implied in the indignant accounts of Obama officials.)  The fact that a new president was to be inaugurated in less than a month, one who, unlike Hillary Clinton, might not continue in lockstep with Obama’s policies, pretty much explained everything.

With the fresh release on 26 May of a page’s worth of text messages between Peter Strzok and Lisa Page, we now have a clearer picture of what happened between 29 December, when the fateful Kislyak-Flynn phone call occurred, and 3 January, when Andrew McCabe knew about the Kislyak-Flynn correspondence.  (See the 21 May article.  McCabe told Mary McCord at the Justice Department about the calls on that date.  He undoubtedly knew about the calls earlier.)

These Jan 3 2017 texts b/t Page & Strzok just were released. Do they provide any insight? pic.twitter.com/hyQLmIWBoS

I say McCabe undoubtedly knew because a Lisa Page text, sent at 6:36 AM on 3 January 2017, refers to McCabe (“Andy”) being “consulted numerous times about whether to include the reporting” in the PDB.  This “reporting” would have been the FBI reporting on the Kislyak-Flynn phone calls.

The Strzok-Page texts on 3 January are precisely what I would have expected to see, assuming the FBI had the phone calls captured and exploited from the very beginning – as opposed to the phone calls turning up like a surprise gift basket.  The wording of the texts indicates the FBI indeed had the phone calls exploited and reported (internally) by Friday, 30 December, a point clarified in the Page text at 20:51 (8:51 PM): “Yeah but keep in mind we were going to put that in the doc on Friday, with potentially larger distribution than just the dni.”  (The previous text shows that this one was about the Kislyak-Flynn phone call intelligence that eventually went to James Clapper.)

It isn’t clear if Page is referring here to including a report on the Kislyak-Flynn phone calls in the 30 December PDB or if she’s speaking of putting it in another document to be forwarded on Friday.  But either way, wanting to put reporting in a document being staffed in a federal agency “on Friday” means you’ve already had the information for at least a few hours at the time you’re working the issue.

There’s no way anyone had to go look for the phone calls after being tasked in the Friday, 30 December PDB, and then “turn” them “up.”  The FBI had them, with cognizance at the Strzok and Priestap level, from the time they happened.

Andrew McCabe, moreover, was apparently involved in a somewhat lengthy exchange over the holiday weekend regarding whether to put that FBI information in the PDB.  He, therefore, knew about the phone calls well before Tuesday morning, 3 January (probably by 30 December, in fact).

We can be 100% confident James Comey knew as well – quite possibly before McCabe did, and certainly within an hour or two, at the most, of the time of exploitation of the 29 December phone call with the most substance in it.

I make that assessment because of the high priority the Flynn operation had obviously had since at least early August 2016, and Comey’s close engagement with it.

That’s not Comey’s story, of course.  But note well: Comey’s own account, the tale of alarm and confusion about Russia’s minimal reaction to the sanctions, would also mean he would have demanded to be advised quickly of any discussions by the Russian ambassador about the sanctions – regardless of whom Ambassador Kislyak had such discussions with.

Comey knew perfectly well that his own people were monitoring Kislyak.  To hear the Washington Post tell it, everyone between Rockville and Richmond knew it.  Comey and the FBI could not possibly need to search for, or merely happen upon, phone calls between Kislyak and Flynn.

John Solomon and others have keyed on the Strzok text at 20:29, in which Strzok referred to Bill Priestap as being “concerned with oversharing,”; i.e., of FBI intelligence.  Priestap, Strzok wrote, “Doesn’t want Clapper giving CR cuts [presumably “cuts” on Crossfire Razor, the codename for the Flynn operation] to WH. All political just shows our hand and potentially makes enemies.”

After Page’s response about putting information in the “doc on Fri,” Strzok revealed a bit more about sentiment in Counterintelligence at the FBI: “The question is should we [i.e., put such information in a document going to the White House], particularly to the entirety of the lame-duck usic with partisan axes to grind.”

That last sentence is interesting.  It seems to indicate Strzok wasn’t in the big-picture inner circle of Obamagate, where it was all about grinding the partisan axes.  We shouldn’t be too ready to jump to a conclusion on that, but the tone of the communication stands out as curiously naïve if Strzok was really in on the whole shebang.

The implication that the FBI Crossfire Hurricane/Razor principals were reluctant to share too much detail around the community isn’t surprising, however.  A mental review of the IC officials involved explains that.

It’s not clear if these are all of the remaining Strzok-Page texts from 3 January.  So far, there is no evidence I’ve seen that Strzok was aware at this point of the specific “Logan Act” gambit that would reportedly be floated with Adam Entous at the Washington Post the next day.  Tuesday morning, 3 January, was the first workday after the holiday weekend, and the focus of Strzok and Page seemed to be on the weekend’s work surrounding the Kislyak-Flynn phone calls.

The Strzok-Page texts are informative.  They make it quite clear the phone calls were known about by the FBI chain of command as quickly as we would expect.  They indicate the CI officials were leery of having Clapper represent their work product to the White House – an understandable concern, and not necessarily peculiar to the Flynn operation.

But for me, the texts’ most significant interest is the light they shed on Comey.  He framed his story to the House committee in March 2017 just well enough to fit the basic outlines of what has emerged from other documentation.  But not quite well enough.

Comey elided the bit about “turning up” the phone calls too much.  For whatever reason, he apparently didn’t want the House to know that the FBI was following Kislyak and Flynn closely, and in fact had information that could have gone to the White House as early as the morning of 30 December, something the whole FBI chain of command was well aware of.

It’s interesting since it didn’t happen that McCabe was “consulted numerous times” about the FBI’s information potentially being included in briefing material to the White House.  It’s also interesting that, according to Comey, the upshot was that he briefed Clapper, and Clapper briefed Obama.  That feature of Comey’s story aligns with Strzok’s reference to the intelligence being forward through Clapper – which Strzok and Priestap apparently saw with misgiving.

But the most exciting thing is the sense this little group of texts gives us of whom to home in on.  There was a lot of chatter, and people running around in circles, throughout this time.  But the major muscle movements were briefing the Kislyak-Flynn intercepts to Obama, briefing the summary of the “salacious, unverified” material in the dossier to Trump (on 6 January); pumping the Kislyak-Flynn narrative to David Ignatius at WaPo, and the ambush interview of Flynn on 24 January.

Those were the things that actually happened and turned out to matter.  Comey was behind two of those, and integrally involved in a third, the brief to Trump.

Those who’ve been with us for a while probably won’t be surprised when I say that, indeed, Comey was undoubtedly culpable in many things.  But in terms of strategy and an entrée, he needed help feeding material into the top level of the IC.  He didn’t pull this off by himself; one doesn’t, from the J. Edgar Hoover Building.

His help didn’t come from Clapper.  Not for delicate things like editing the narrative, strategizing it, and timing it.   I’d be pretty confident it came from another Obamagate insider, who probably didn’t have to be briefed by Comey that Kislyak and Flynn spoke by phone on 29 December.  That would be John Brennan. 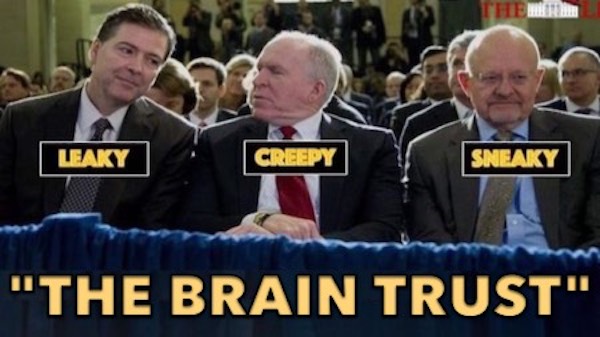