It’s time to add to the list of dumb things the global warming moonbats claim is caused by their hoax.  During the past two years the left has blamed global warming for Incredible shrinking sheep, Invasion of jellyfish in the Mediterranean, Surge in fatal shark attack, Boy Scout tornado deaths, Severe acne, Global conflict, Beer tasting different, Suicide of farmers in Australia, Bigger tuna fish, longer days, shorter days, Collapse of gingerbread houses in Sweden, Cow infertility, UFO sightings in the UK, Rise in insurance premiums, and Heroin addiction and a rise in bear attacks in Japan and Frigid Cold Winters in Great Britain, and Cancer, Death from heart disease, diabetes, stroke, respiratory disease and even accidents, homicide, suicide, water -borne disease outbreaks, heavier, wetter snowstorms treacherous for travel and ambulation, Lyme disease, swarms of allergy-inducing, stinging insects, along with mosquitoes and devastating pine bark beetle infestations and the spread of forest and crop pests, 40,000 dead crabs , the unrest in the Middle East. and love making. 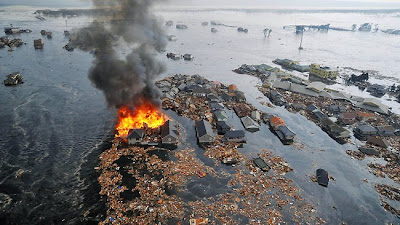 Today’s add is simply disgusting. Many in the global warming community have exploited the tragedy in Japan to push their climate change hoax. The environmental website Grist wrote this about the disaster:

So far, today’s tsunami has mainly affected Japan — there are reports of up to 300 dead in the coastal city of Sendai — but future tsunamis could strike the U.S. and virtually any other coastal area of the world with equal or greater force, say scientists. In a little-heeded warning issued at a 2009 conference on the subject, experts outlined a range of mechanisms by which climate change could already be causing more earthquakes, tsunamis, and volcanic activity.

“When the ice is lost, the earth’s crust bounces back up again and that triggers earthquakes, which trigger submarine landslides, which cause tsunamis,” Bill McGuire, professor at University College London, told Reuters.

Melting ice masses change the pressures on the underlying earth, which can lead to earthquakes and tsunamis, but that’s just the beginning. Rising seas also change the balance of mass across earth’s surface, putting new strain on old earthquake faults, and may have been partly to blame for the devastating 2004 tsunami that struck Southeast Asia, according to experts from the China Meteorological Administration. 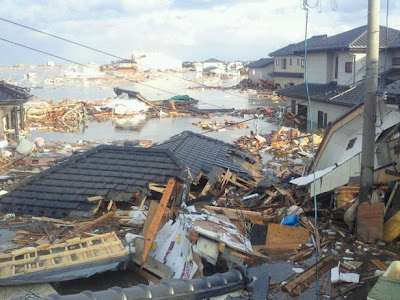 Staffan Nilsson President of the  European Economic and Social Committee (EESC) also used the tragedy as an excuse to push the global warming hoax.

The earthquake and tsunami will clearly have a severe impact on the economic and social activities of the region. Some islands affected by climate change have been hit. Has not the time come to demonstrate on solidarity – not least solidarity in combating and adapting to climate change and global warming? Mother Nature has again given us a sign that that is what we need to do.

Usually I find these connections between natural  and the global warming hoax laughable. But this exploitation of thousands of deaths in Japan is not funny, its sick and anybody who makes this fake connection should be ashamed of themselves.