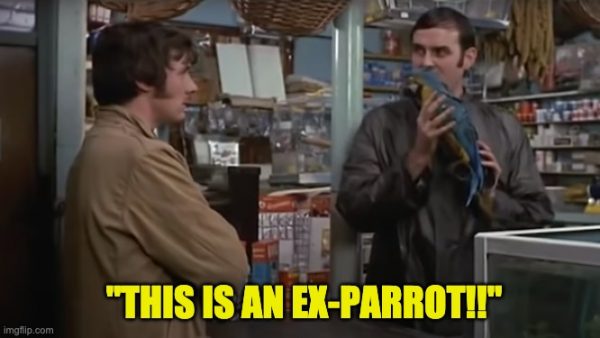 Man buys a parrot and is disappointed in his purchase. Hilarity ensues. Monty Python Dead Parrot

We have no idea whether the complainant in this lawsuit has any idea why the rest of us are snickering, but a real-life lawsuit echoed one of Monty Python’s best sketches. Let’s start with a quick recap to get any of our younger readers, unfamiliar with the reference, up to speed.

Long before there were Netflix comedy specials on TV, there was something called sketch comedy. And among the best of the genre stand the ‘Monty Python’ cast. You may know them from Monty Python and the Quest for the Holy Grail, Life of Brian, Meaning of Life, or Live at Hollywood Bowl. Before any of that, however. Was their show, Monty Python’s Flying Circus, which gave us favorites like the Four Yorkshiremen, Nudge Nudge, The Argument Sketch, and my personal favorite, The Dead Parrot Sketch.

The joke is, an angry customer gets into a heated exchange with a pet store owner when he brings back a parrot he’d just purchased claiming it was, in fact, dead when he bought it and was only still sitting on his perch because the shopkeeper had nailed him there. Please note, no real parrots or pet shop owners were hurt in the filming of this sketch.

As an additional plot twist, if you watch to the end of the sketch, it transitions into the Lumberjack song another personal favorite.   The Lumberjack song takes place in British Columbia, the Canadian Provence where the real story occurred (explained after the video)

We told you that so we could tell you this…

Here in the real world, (if Canada actually counts as ‘the real world) a court case echoed this exact problem.

A man bought a parrot that wasn’t YET stone-dead, but it HAD been evidencing signs of a terminal illness… signs the shopkeeper assured the customer that it was simply evidence of the parrot — (yes, there really was a parrot in this story!) ‘molting’.

Per the Canadian Broadcasting Company:

According to the Civil Resolution Tribunal decision, Michael Davy said he noticed the parrot — Tiberius — was missing a few tail feathers when he bought it but was told the bird was only “molting and had clipped wings but was otherwise healthy.”

…Tiberius should have had a life expectancy of up to 40 years. Davy soon learned he had a fatal disease and — in fact — faced the prospect of becoming an ex-parrot in a just a fraction of that time.

“I find that there was an implied warranty in the parties’ contract that Tiberius would be healthy for at least six months,” wrote tribunal member Julie Gibson.

…”He noticed that Tiberius was missing some tail feathers, but thought this was due to Tiberius’ diet, which has been seed only but would ideally include lot of fruits and vegetables,” Gibson wrote.

A veterinarian diagnosed Tiberius with psittacine beak and feather disease (PBFD), “an extremely contagious and lethal virus” that is usually contracted “from a contaminated environment or directly from an infected bird.”

Even with medication he had between “weeks and several years to live.” — CBC

The Eclectus parrot (regrettably, it wasn’t a Norweigan Blue, which at the time of the writing was an entirely fictional bird) was purchased for $2100. The judge ruled in favor of the complainant, but since he had gotten some value out of the bird, compensated him at 75%.

There is no word on whether the Pet Shop owner ripped off his jacket, exposing a flannel shirt and sang about how his life’s goal was to be a lumberjack who “cut down trees. I wear high heels, suspenders, and a bra.” And wishes, “I’d been a girlie, Just like my dear Papa.