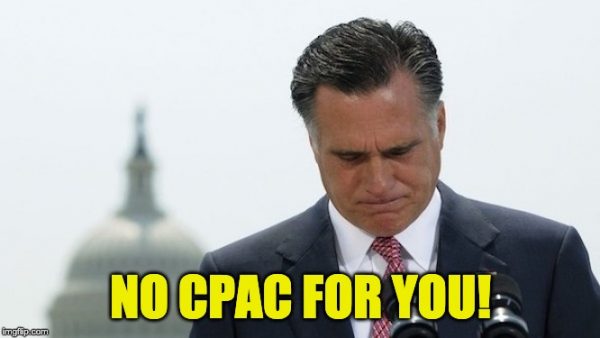 At the end of February this year, like every year, I’ll be to our nation’s capital for the annual Conservative Political Action Conference (CPAC). There I will be meeting with other conservative media personalities, and activists. We will be swamped with politicians trying to get our attention for a blog post or a radio appearance. One politician who won’t be there will be Mitt Romney. Mitt Romney CPAC

Matt Schlapp, the Chairman of the American Conservative Union, the organization that runs CPAC, thanked Romney for his vote to call additional witnesses to the Senate impeachment trial by inviting the Senator to stay the heck away from his conference. Romney was one of two Republicans who joined 47 Democrats to smack President Trump and other conservatives supporting the motion for more unnecessary witnesses, which thankfully failed to pass on Friday.’

BREAKING: The "extreme conservative" and Junior Senator from the great state of Utah, @SenatorRomney is formally NOT invited to #CPAC2020. pic.twitter.com/f35tYy73V1

Romney had been at CPAC before.  In 2012, he came to CPAC to beg conservatives to support him for the GOP nomination. After his loss, Romney didn’t need conservatives anymore, so he returned to his liberal roots. Well.. except for when he begged Trump to be his secretary of state, and when he begged Utah conservatives for their support to run for Senate.

Since he became a senator, Romney has gone out of his way to be a thorn in President Trump’s side because he claims not to like the president’s rhetoric and style.  But it was Trump’s rhetoric and style that prevented him from becoming a loser in 2016 like Romney was in 2012.

But what really made Romney a loser was that he only acts like a conservative when it is politically expedient. Today he voted like a Democrat to extend the senate trial. As the president’s acquittal is all but guaranteed, the only reason for Romney’s vote was to hurt President Trump and his conservative followers.

As the Chairman of the ACU, Matt Schlapp has made the organization proud. When things got tough, and Romney deserted conservatives, Schlapp stuck up for conservatives and told Romney to stay home.  There are many reasons for me to be going to CPAC this year, but tonight there is another reason. I can’t wait to get to CPAC and shake Matt Schlapp’s hand to thank him for having the guts to tell Mitt Romney to stay the heck out of his conference.