Mitt Romney, On Track to Being Worse For GOP Than John McCain 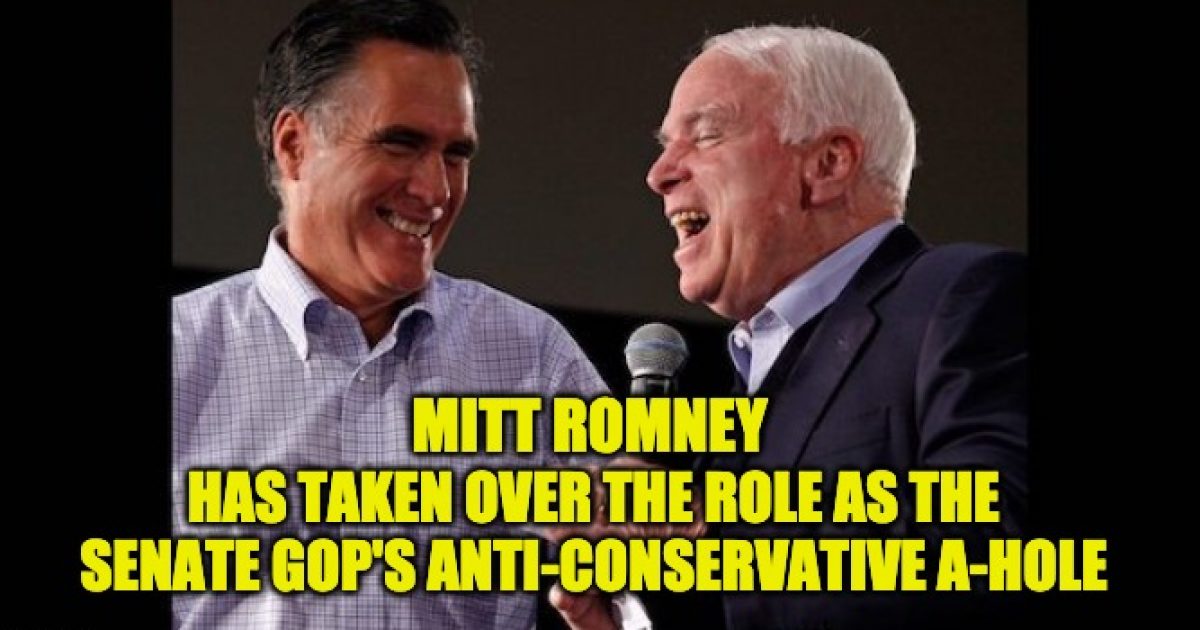 Although not from the same state, John McCain has a true successor in the U.S. Senate–Mitt Romney.

In his last few terms, before he died, Sen. John McCain became a net negative for the country. Or to put it more plainly he was anti-conservative and an a-hole.  Besides going back on his promise to push for a border wall, McCain became divisive and attacked his fellow Republicans more than the opposition party. Instead of trying to work with a people’s movement McCain especially hated the Tea Party or anyone associated with the Tea Party, like Sens Rand Paul and Ted Cruz for example. Despite the fact  Sarah Palin sacrificed her career and worked her butt off to get him elected President, McCain stabbed her in the back on his deathbed. He lamented that he shouldn’t have picked her as his V.P. By his own admission, McCain was FBI’s source for the anti-Trump dossier and when planning out his funeral demanded that the president stay away from his funeral. And as one of his last acts in the U.S. Senate McCain screwed both his party and his country with his last-minute decision to vote no on the plan to repeal and replace Obamacare.

But thus far, Utah Sen. Mitt Romney in on track to be worse than McCain as he clearly seeks to be the “new” Senate GOP designated anti-conservative a-hole.

Five short months in the U.S. Senate, Romney has already racked up a record as traitorous to the conservative cause as McCain and reminded conservatives why they voted GOP while holding their noses in both 2008 and 2012.

For instance, Romney’s latest calumny is to side with the one man in Congress that literally, nobody is backing: lunatic Trump hater Justin Amash. Amash, a “Republican” from Michigan, looks like is on his last term in Congress as his polling numbers back home have cratered due to his absurd anti-Trump pronouncements.

Amash is about the only elected Republican in the country that is agitating for a Trump impeachment. He’s not just in favor of it, he is nearly as wild-eyed and rabid about it as the worst Democrat in the House.

And then there is our pal, Mitt Romney, cozying up to this loser, calling him “courageous,” and refusing to support Trump’s 2020 reelection.

Why would Romney do such an idiotic thing?

“I am also appalled that, among other things, fellow citizens working in a campaign for president welcomed help from Russia — including information that had been illegally obtained; that none of them acted to inform American law enforcement,” Romney said last Friday. Did he even read the Mueller report?  He says he read it, but he may be lying. I read it, and it doesn’t say what Romney thinks it said.

Former Governor Mike Huckabee took a swipe at Romney shortly after the Sen. made the statement.

“Know what makes me sick, Mitt?” Huckabee Tweeted. “Not how disingenuous you were to take @realDonaldTrump $$ and then 4 yrs later jealously trash him & then love him again when you begged to be Sec of State, but makes me sick that you got GOP nomination and could have been @POTUS.”

Know what makes me sick, Mitt? Not how disingenuous you were to take @realDonaldTrump $$ and then 4 yrs later jealously trash him & then love him again when you begged to be Sec of State, but makes me sick that you got GOP nomination and could have been @POTUS https://t.co/dmidOraRGQ

But, let’s remind ourselves who Romney is. He was a liberal Republican who only won a single term as the Governor of left-wing Massachusetts, worked against the Second Amendment and supported abortion after he was against it. He also helped create Obamacare, a disastrous policy that is hurting the country to this very day (the same policy his pal McCain made sure we were stuck with via one of his last, black-hearted votes before he died).

Romney is a loser. He ran for U.S. Senate in Mass. and lost. At least Romney finally won a single term as Mass. gov. but was so unpopular lost his reelection campaign. Then, he ran for president two times the last time in 2012 when he lost a winnable election to Barack Obama.

Then, in 2018, he packed up his millions, headed to Utah, and bought himself a U.S. Senate seat.

This is the guy parading around as the voice of the party! So, what has he been doing in the Senate? Well, he’s been fighting the all-important battle to put an end one of America’s most crucial issue—vaping…Well, that and taking over for the late senator McCain as the Republican Senate A-hole.