Minneapolis City Council President: A Police-Free Future Is The Goal 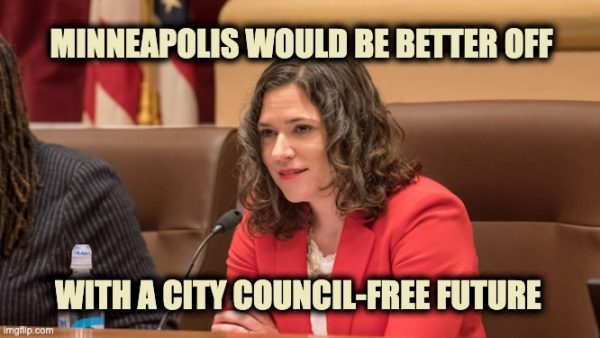 Establishing that she is a few fries short of a happy meal, Minneapolis City Council President Lisa Bender appeared on CNN Monday to demonstrate her lack of cranial deftness. Bender is the same left-winger who said that not wanting to get robbed is a sign of ‘privilege, also told CNN propagandist Chris Cuomo that a “police-free future” is “the goal.”

Does anyone have her address? If she gets her way, it would be nice to go into her house and take some of her belongings if ever get to Minneapolis.

In another appearance, she told Wolf Blitzer that “we don’t have all the answers” on who might respond to reports of violent crime without police.

“When you say you see someday being police-free, that sounds aspirational in terms of a utopian concept where no one is committing any crime,” Cuomo began. Then he continued by admitting there would have to be good men and women ready to step up to keep the community safe.

“I think the idea of having a police-free future is very aspirational, and I am willing to stand with community members who are asking us to think of that as the goal,” she said in response.

But she also admitted that she has absolutely no idea how to go about protecting the city.

CNN’s Wolf Blitzer stumps Minneapolis City Council President Lisa Bender: “we don't have all the answers" on who responds to violent crime without policehttps://t.co/mLul5fUeBB pic.twitter.com/0f80RY3p0t

Oh, is that important to someone that liberal?

Response on Twitter was pretty much what you’d expect—The lady is NUTS,

Lisa Bender needs to be stopped! How did she win an election?!

That’s easy — stupid people voted for her while others sat home and didn’t vote.

I don’t know if it’s peak stupid, but it would sure make the finals.

Community Marxist Force is the goal. Make no mistake.

Well, that is the Minneapolis mantra.

And you are first figuring that out NOW? At least you’re catching on…

“We’re not going to tomorrow all the sudden have nobody for you to call for help. There will be thoughtful and intentional work that’s done, research engagement, learning that happens in a transition that will happen over time,” Cunningham said.

Many people have asked, in this visionary future with no police, “Who do you call when there’s no 911?” One of the speakers on Sunday said it would be family and neighbors.

“I’ll work relentlessly with Chief [Medaria] Arradondo and alongside community toward deep, structural reform and addressing systemic racism in police culture,” the mayor said. “And we’re ready to dig in and enact more community-led, public safety strategies on behalf of our city. But I do not support abolishing the Minneapolis Police Department.”

It will be interesting to see what happens.

Stock up on popcorn and stay tuned…but whatever you do, DON’T move to Minneapolis.