If any story proves that this global warming hoax has gone too far, it is this one. Scientists in Argentina are strapping red tanks on the back of tanks to collect their stomach gasses because cow farts are a big source of methane, a greenhouse gas. If this wasn’t true it would be funny. Can you see the bureaucracy forming “the ministry of bovine flatulence collection?” OY. Brings back memory of Monty Python. Read more and see what these fart tanks look like, below:

Reducing cow burping ‘is key to tackling climate change’
Argentine scientists are taking a novel approach to studying global warming – strapping plastic tanks to the backs of cows to collect their burps and farts. Researchers say the slow digestive system of cows makes them a producer of methane, a potent greenhouse gas that gets far less public attention than carbon dioxide in efforts to fight global warming. 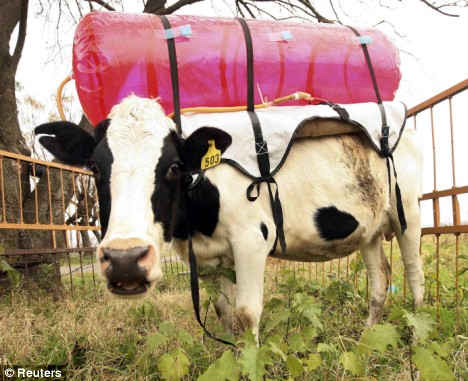 Scientists at the National Institute of Agricultural Technology in Castelar, Argentina will analyse the gas collected from cows Scientists around the world are studying the amount of methane in gas expelled by cows and Argentine researchers have come up with a unique way to collect and analyse it.
They attached red plastic tanks to the cows’ backs and connected them through a tube to their stomachs, which trapped the gas.
‘When we got the first results, we were surprised. Thirty per cent of Argentina’s (total greenhouse) emissions could be generated by cows,’ said Guillermo Berra, a researcher at the National Institute of Agricultural Technology. One of the world’s biggest beef producers, Argentina has some 55 million heads of cattle grazing on the famed Pampas grasslands. 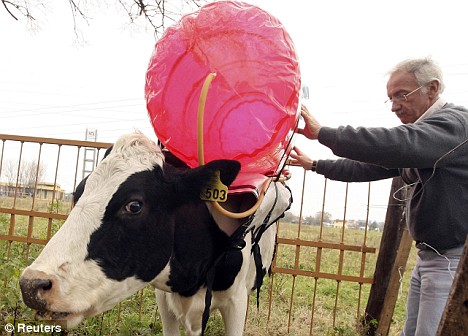 Guillermo Berra was surprised to find a cow could release up to 1,000 litres of gas a day Berra said the researchers ‘never thought’ a cow weighing 550 kg (1,210 lb) could produce 800 to 1,000 litres (28 to 35 cubic feet) of emissions each day. At least 10 cows are being studied, Berra said, including some in a corral whose burps are collected in yellow balloons hanging from the roof.Greenhouse gases are widely blamed for causing global warming. Methane, researchers say, is 23 times more potent than carbon dioxide in trapping heat in the atmosphere and can be found in animal waste, landfills, coal mines and leaking natural gas pipes. Scientists are working to develop new diets for cows that could make it easier for them to digest food, moving them away from grains to plants like alfalfa and clover. ‘We have done a preliminary study and have found that by using tannins, you can reduce methane emissions by 25 percent,’ said Silvia Valtorta of the National Council of Scientific and Technical Investigations.