Is mini-mike better than the regular folk? He seems to think so. 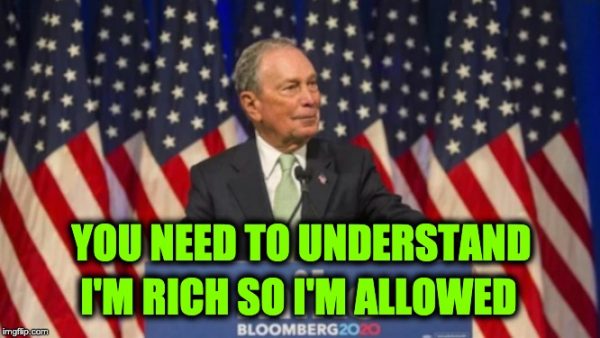 Considering his robust anti-2a activism, mini-Mike Bloomberg should have expected this question. So why was he so ill-prepared to answer it?

He was so busy trying to push the policy side of his idea that he totally missed the point of the question.

Here’s what he was asked…

“You have an armed security detail that is likely equipped with the same firearms and magazines you seek to ban the common citizen from owning. Does your life matter more than mine or my family’s?”

Michael Bloomberg is ENDED by a citizen on gun control:

"You have an armed security detail that is likely equipped with the same firearms and magazines you seek to ban the common citizen from owning. Does your life matter more than mine or my family's?" pic.twitter.com/LawKcwJEwl

His response was totally idiotic. His answer went directly to his importance as NYC mayor, the number of threats he faces in a day, the fact that he’s rich, and he pays for it out of his own money.

From there, Bloomberg tried to pivot away from the real question he was being asked. Let’s look at this first part of his answer, remembering that the critical question was, ‘does your life matter more than mine or my family’s?’

His reply touches on 3 main ideas.

Weighed against the ‘does your life matter more’ question as a justification for why HIS security detail should have access to weapons that the general public should NOT have access to, let’s take each of those 3 points in turn… changing the order slightly.

Point 1) That’s all well and good, Mr. Bloomberg, but it doesn’t take 50 threats in a day to see the value of firearm ownership. It only takes ONE.

It wasn’t very long ago that a group celebrating Hannukah learned that it only takes ONE time, and a gun in your holster responds a lot faster than a cop in a squad car — if you can even get a chance to dial 9-1-1.

Point 3) And how did these cops become ‘highly-trained’? Precisely the same way that any OTHER civilian becomes highly trained. Education and practice. Two things lawful gun owners are well known for. It’s also something that is a priority for the NRA.

In fact, we’ll go one better than his ‘highly-trained police officer’ reference…

Then along comes the news from the Crime Prevention Research Center that concealed-carry permit holders are the most law-abiding demographic of U.S. citizens, and you just want to throw your hands up and give high-fives to everyone around. The report, titled, “Concealed Carry Permit Holders Across The United States 2016,” compared permit holders to the general population and then to police officers in Florida and Texas.

Though that data only covers two states (large, populated states, we might add), the data revealed that from 2005 to 2007, permit holders are convicted of felonies and misdemeanors at less than a sixth of the rate of police officers, according to the study. Out of 100,000 officers, firearm violations are committed 16.5 percent of the time, seven times more frequently than permit holders, at only 2.4 per 100,000 in Texas and Florida. Well done, folks. — GunsToday

Which brings us back to the money question…

You’d think a Billionaire would be a better logical thinker — in particular, that he might have a more robust understanding of what he’s REALLY doing when he hires someone to do a job.

The funny thing about money is that it is — in some sense — an extension of yourself. For example, most people, when they get hungry, need to prepare a meal. But if you have money, you can outsource that task someone else by giving up some of your wealth in exchange. You go to a restaurant, buy something ready-made, or sometimes even have hired help dedicated to that task.

Most of us don’t have the kind of cash for a personal chef, a driver, cleaning staff, and whatever. So we do our own chores, cook our own meals, take our own calls, and wash our own clothes.

Personal protection is no different.

Blomberg believes that private citizens have the right to be protected from possible threats. When you have money, you can outsource your own firearms training and competency to someone else, the same way you might hire a private chef.

Only a fool fails to understand that the principles of your neighbor Jimmy owning a 9mm because he has made up his mind that he will not be a victim, and a billionaire paying a security firm to keep the bad guys at bay is precisely the same. And the regular folk, purchase their protection too when one considers that except for the ones who receive them as gifts, Americans with firearms purchase them with their own money.

The only difference being that the Billionaire outsources his right to defend himself to properly-trained private citizens who have found a way to market their firearms training much like a chauffeur finds a way to market his driving skills.

The questioner was exactly correct.

Bloomberg believes that, because of his wealth and because of his importance, he should be allowed to hire other people to defend his ass using the same weapons and skills that the unwashed masses would use to exercise their OWN right to defend themselves.

Unlike the Democrats, I have no problem with people earning billions. I do have a problem with rich people who believe the Bill of Rights applies to them more than the rest of us. Bloomberg is one of those. Not only is he an arrogant SOB, but he believes elites’ should play by different rules.