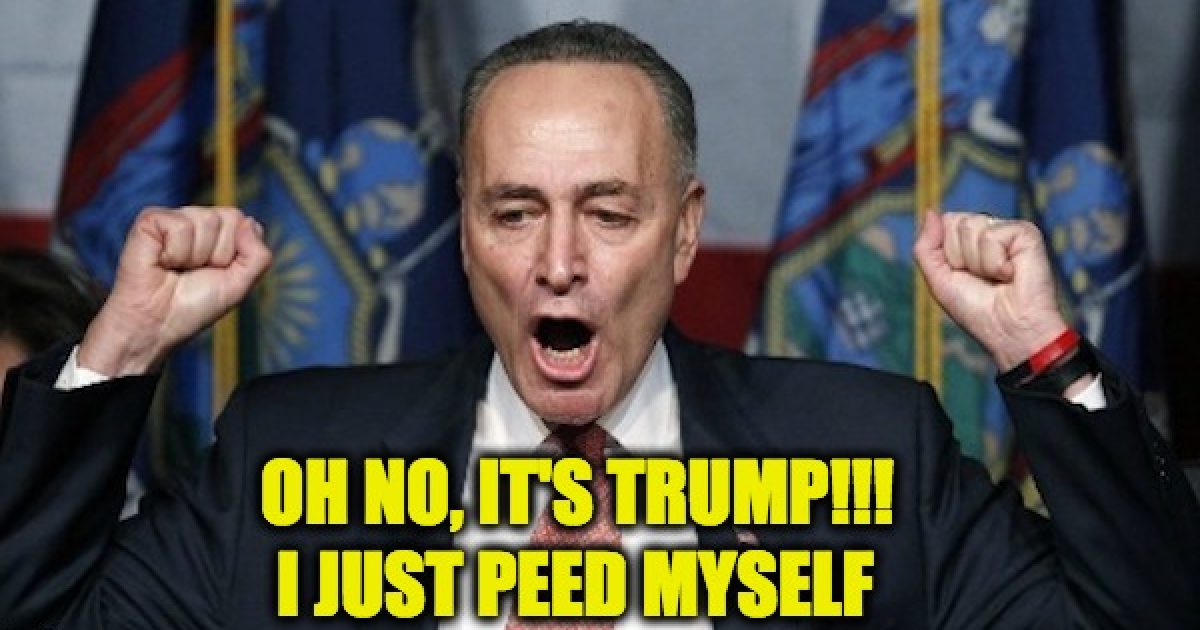 Trumpaphobia: noun – an extreme or irrational fear of, or aversion to, Donald Trump (source)

It never ceases to amaze me, actually, it has ceased to amaze me, the depths the Left will go to in order to attack and make President Trump look bad. Just as the media out-right lies about how the American people just love Obama and Hillary, so too the media constantly lies about how America hates Trump.

The Liberal Left is so unhinged over the Trump presidency it’s amazing any of these mental midgets can function at all. Actually that is too harsh – the Left does indeed function well, they pat themselves on the back as being America’s champions, they decry anything the Conservatives believe in and represent it as evil to the American people, and they thrive on any and all things that bring about chaos and destruction in the U.S. Just check out cities and states run by Democrats to verify my claims here.

There is no action too low, too corrupt, too dirty, or mean-spirited that the Demoncrats won’t engage in to bring Trump down.

The infamous Trump dossier, plan A to derail the Trump Presidency – a completely fabricated package of lies likely used as the springboard to open the Mueller investigation. Hillary Clinton and the DNC paid for this so-called research to be done by Fusion GPS who in turn hired a former MI6 agent with a wild imagination and a lust for a large juicy payout.

The Mueller investigation into Trump collusion with the Russians. This so-called investigation is nothing more than a witch-hunt against Trump, just another attempt to discredit and bring down Trump. This “investigation” along with the Trump dossier may well be the insurance policy the FBI is now on the hot seat for. Mueller’s investigation has turned up zero evidence of Trump colluding with Russia; let me say that again, zero evidence. This is a fishing expedition with no end in sight costing Americans millions of dollars while the very ones doing the investigating are the ones covering up mega-crimes they themselves committed!

The FBI and DOJ collusion against Donald Trump. While no evidence of improper actions on the part of Trump has been turned up, there has been a lot of evidence coming out about the criminal wrongdoing by the FBI and the DOJ. Not the rank and file of these two agencies, but rather the upper echelon – to wit:

On a different front, there is the fictitious disgraceful piece of drivel written by Michael Wolff, Fire and Fury: Inside the Trump White House. (Rev. Austin Miles wrote a great piece on this book.) This contemptible piece of garbage written by a man with highly questionable writing skills, known for making things up – has the Liberals rubbing their hands together with glee. The Democrats are basically saying regarding this book, see, see – Trump is an idiot; unfit to run this country, mentally unstable. This trash combined with the recently introduced “Stable Genius Act” is the Deep State plan B to remove Trump from office.

In this writer’s opinion, if Trump is such an idiot, a buffoon, is unstable, and has a questionable mental state – then how has he accomplished more in a year then the Dems have in 20 years? The stock market is soaring, new jobs are being created at a great pace, companies are coming back to the U.S., and many U.S. companies have recently awarded bonuses to employees and wage hikes, also in some cases announcing expansion plans.

What claims can the Democrats make on how they have measurably improved the economic status of Americans and the overall state of the United States? They have no such claims – other than to say, this is how it is, this is a new reality, live with it.

Maybe – the Democrats need to check their Liberal Privilege …

The Clinton crime syndicate has a long history of underhanded deals, illegal activity, fraudulent “fundraising”, and blatant lying among other things. Basically, every form of corruption known, the Clintons and their allies are right in the middle of it.

Apparently, agencies in the U.S. government, like the DOJ, the FBI, and parts of our own intelligence apparatus are ready and willing to cover for Hillary Clinton and others. Congress needs to immediately and thoroughly investigate the DOJ and the FBI at a minimum. This will all turn out to be the biggest scandal and abuse of power in American history.

The Democrats will stop at nothing to bring down President Trump and anyone who aligns themselves with Trump while our mainstream media helps them do it. Not to mention our favorite social media platforms. No one in their right mind should believe a word that is reported by the mainstream media, they are inept fabricators of innuendo and lies.

As for the Demoncrats, it has become painfully obvious – unless you have been hiding under a rock or are an idiot – that the Liberals are neck deep in corruption while denying it and shamelessly attacking President Trump.

America needs to stop drinking the Liberal Kool-Aid served up by Democrats, the Liberal media, Liberal and social media they cause Trumpaphobia. They need to start rationally thinking for themselves.

The views expressed in this opinion article are solely those of their author and are not necessarily either shared or endorsed by Lidblog.com