I Voted For A Second Trump Term, And Believe The Biden Presidency Is Horrible. But Pence’s January 6th Decision To Protect The Constitution Was Patriotic And Correct. 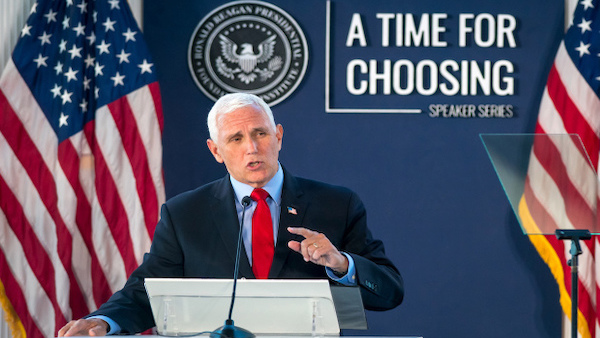 Former Vice President Mike Pence says he is proud he certified the 2020 election for Joe Biden on January 6th. He should be proud because he put the U.S. Constitution before his own interests.

Regular readers know that was a big supporter of President Trump. I voted for him twice (not twice in the same election–once each time he ran. I’m not a Democrat, so I only vote once per election day). My support of Trump was so strong that Trump haters have accused me of carrying water for him. Please note, I have a very bad back; therefore, I can’t carry water for anyone.

Speaking at the Reagan Library this past Thursday, the former V.P. said:

“I will always be proud that we did our part on that tragic day to reconvene the Congress and fulfilled our duty under the Constitution and the laws of the United States,” Pence said.

“Now, I understand the disappointment many feel about the last election,” Pence added. “I can relate. I was on the ballot. But you know, there’s more at stake than our party and our political fortunes in this moment. If we lose faith in the Constitution, we won’t just lose elections – we’ll lose our country.”

Pence is 100% correct. Even the people who believe the election was stolen should be proud of Mike Pence for correctly executing his constitutional duty.

Leading up to January 6th, when Congress confirmed the electoral college vote,  President Trump and some Republicans argued that Vice President Pence had the “exclusive authority” to reject Biden’s electoral votes and choose the ones for Trump. President Trump and those who agreed that Pence could make his own decisions about the electoral college votes are 100% wrong.  Per the Constitution and the law, Mike Pence’s only job was to preside over the session. That’s all.

He had no constitutional ability to change the vote—I wish he did as the Biden presidency is screwing up the country. But it was more important for him to follow the Constitution.

As Pence correctly wrote in the letter he sent to congress before they met that day:

In other words, whether or not he believes there was funky stuff that happened on election day, it doesn’t matter. Only Congress can decide to reject the electoral results–not the Vice President.  And constitutionally, he is correct.

Those congressional objections must meet the legal procedure as stated in the law 3 U.S. Code § 15 – Counting electoral votes in Congress) will be given proper consideration.

As a conservative and as a Trump supporter, I have often stated that the Constitution comes first. One of President Trump’s legacies his appointment of three constitutionalists to the U.S. Supreme Court. With his letter and actions on January 6th, 2020,  Vice President Mike Pence proved that he puts the constitution before himself. In fact, that’s how he ended his letter.

Former VP Mike Pence’s comments that he did the right thing on Thursday were criticized by some conservative pundits.  Pence was booed and called a traitor because he didn’t block congressional certification of the election results a week earlier when while speaking at a Faith & Freedom Coalition conference on June 17th.

To be honest, I am horrified by the actions of the Biden administration and the Democratic party’s socialists over the past five months. Despite their failures, thankfully, we still have the Constitution as a safeguard. But if Vice President Mike Pence ignored the constitution on January 6th, would conservatives be able to use the constitution to block the HR1 bill that ignores the constitution and transfers election responsibility from the states to the federal government?

Understand that this is not a political issue, it’s a constitutional one. I am willing to learn, If you object to what Pence did please let me know where in the constitution does it indicate that the former VP had an option to do anything besides certifying the election.  Boo and criticize Mike Pence all you want but if you want to be an adult about it, first state what other option he had per the constitution. Otherwise, you must agree that certifying the Biden election was Pence’s only choice.

Protecting the Constitution is the first obligation of our elected leaders. And even though I hate the results, Mike Pence’s decision to protect the constitution on January 6th was the correct and patriotic thing to do.

If you want to read the entire Pence to Congress letter click here.