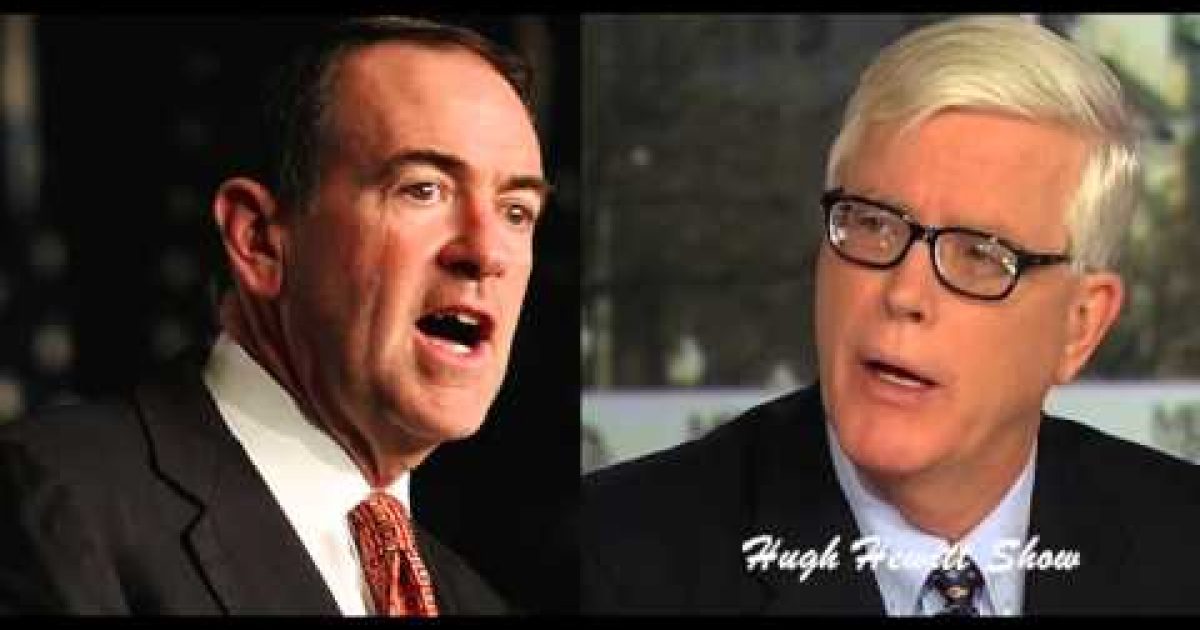 Former Arkansas Governor Mike Huckabee has known the Clintons his entire political life after all they were big political powers in his state, and except when he ran for president, every time Huckabee ran for office he was battling the Clinton machine.

A guest on Tuesday’s Hugh Hewitt program, Huckabee talked about the Clinton political machine their supporters, “the Clintonites, the Clintonistas as we called them in Arkansas,” and what he through about the Hillary press conference about her emails. As you can see in the transcript and audio Huckabee was kind, not wanting to call her a liar, he called her “truth challenged;”

Huckabee: Well, I guess I’ve known her for 25 years or more, actually more than that, because it really goes long before my time as, even as a political candidate, and that’s 25 years ago. So probably back into the 80s. I knew her husband better, but I’ve known her for many years and have interacted with her, ran against the political machine that the Clintons built every time I was on the ballot, and found that it was a very formidable and sometimes ominous undertaking to challenge this incredible political machine. I think people underestimate the political strength of this couple.

Hewitt: Did you watch her press conference today?

Huckabee: I did. Yeah, I did, and I felt one of the things most interesting, and I can’t believe none of the reporters challenged her when she made this whole issue about not wanting to carry two devices, because she wanted to be able to only carry one. Well Hugh, anybody with an iPhone who paid their bill last month should know that you can have one device and multiple accounts that will come to that device. The notion that she had to have more than one physical device in order to have more than one account to which she could access is on its face ludicrous.

Hewitt: It is, and she may have confused the Steelers fans, Governor, but I look at the online reaction to this, and it’s overwhelmingly negative. So I want to put it to you baldly. Do you think Mrs. Clinton was lying today?

Huckabee: Boy, that’s a tough word. Let’s say she is incredibly either uninformed about the realities of technical equipment, or it would be fair to say that she is memory-challenged, maybe truth-challenged would even be more fair.

Huckabee: Well, because I don’t know what she knows. I just can’t believe, however, I mean let me put it this way. It stretches any level of credibility on her part to believe, to make us believe that she truly believed she was following all the rules, all the laws, and that she did not realize that she could have both her personal and State Department accounts coming to her one device. And by the way, there’s already a video that’s surfaced where she just two weeks ago admitted that she had both an iPhone and a Blackberry. So apparently, I don’t know how long she’s had both devices, but she claims now that she has had both devices, or at least two, when at the press conference, she pretended that she only had one. I’m telling you, the more that she talks, the more troublesome this becomes for her. And I find it entertaining to watch the Hillary supporters, the Clintonites, the Clintonistas as we called them in Arkansas, to trot and out and try to defend this. And even they are having a hard time. I think they found it easier to defend Bill in the Monica Lewinsky situation than they are defending Hillary with this.

Writers, Of All People, Are Now Censors
January 23rd, 2021 Sons of Liberty Media

Biden Admits Truth About Pandemic After Saying Trump Has No Plan; Thousands Dead Due To His Mishandling (Video)
January 23rd, 2021 Conservative Firing Line