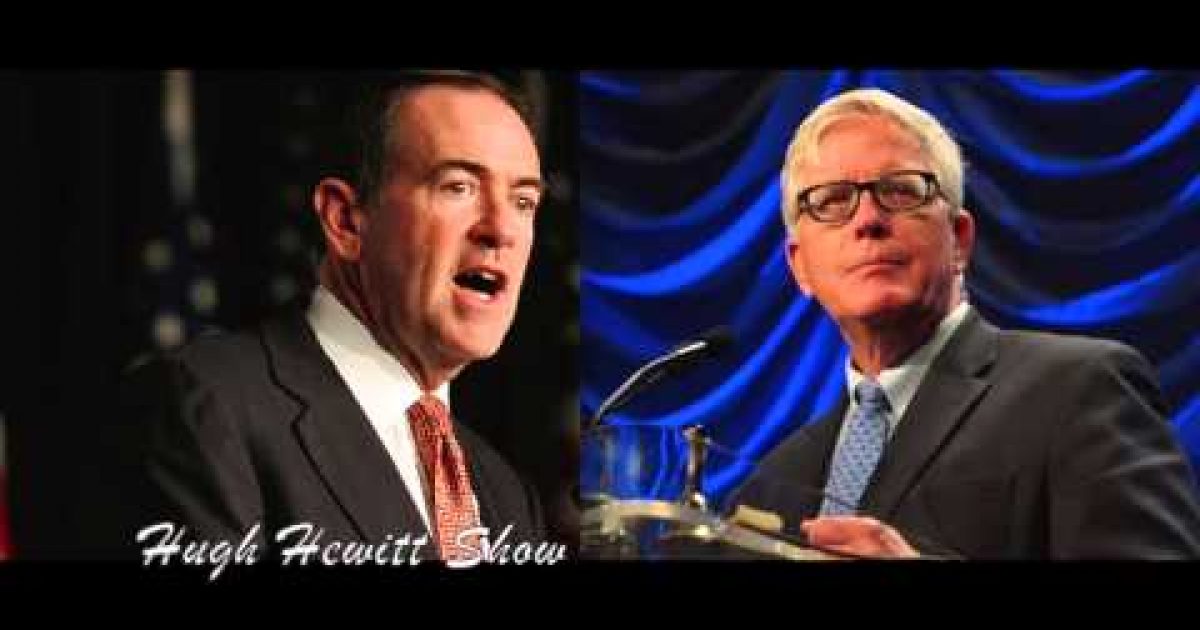 Mike Huckabee is certainly establishing a unique position in his race for president–his position is very way out there. Its not that he is against same sex marriage, many conservatives are against that. Huckabee however seems to be saying that he is urging states to ignore a Supreme Court ruling if they rule to force states to marry Gay couples.  At least that’s what he said to Hugh Hewitt on Tuesday evening’s program.  However when Hewitt asked Huckabee if he was calling for civil disobedience, the former Fox host danced around the question.

Whether one agrees with Huckabee’s position or not it is clear that he doesn’t have the guts to stick to his position.  Read the Transcript/watch the video below:

Hewitt: Now Governor, in God, Guns, Grits and Gravy, you talk about same sex marriage. And just this week, it was announced, actually on Friday, that the Supreme Court will hear the argument in the case, and we’ll probably have a decision by the end of June. I understood you to make a statement, but I want you to speak for yourself on this, that if the Republican Party is wrong on this, you’re not in the Republican Party anymore. What you clarify for me what you were saying, because I wasn’t at the Values Voters Summit when it was said.

Huckabee: Yeah, it was actually in a radio interview that I did with Tim Wildmon. And I was speaking somewhat rhetorically, but my point was if the Republican Party decides that it no longer is going to support traditional marriage, then they start losing people like me, that I’ll be done. Now am I going to walk away and not run as a Republican? No, I mean, unless they totally go off the left field. But there does come a point at which I think we have to take a stand. I may be lonely, I may be the only one, but I’m going to stand absolutely faithful to the issue of marriage not because it’s a politically expedient thing to do, because it isn’t. I’m going to do it because I believe it is the right position, it’s the Biblical position, it’s the historical position. I believe like Barack Obama said he believed back in 2008, that it’s an issue that has been settled by the Bible, and God is in the mix. Now one of three things – either Barack Obama was lying in 2008, he’s been lying now since he’s changed his view, or the Bible got rewritten, and he was the only one who got the new version. So I’m just going to have to say that I haven’t been given the role of editor. And I’m not angry about it. One thing I am angry about, though, Hugh, is this notion of judicial supremacy, where if the courts make a decision, I hear governors and even some aspirants to the presidency say well, that’s settled, and it’s the law of the land. No, it isn’t the law of the land. Constitutionally, the courts cannot make a law. They can interpret one. And then the legislature has to create enabling legislation, and the executive has to sign it, and has to enforce it.

Hewitt: I’ll be right back. One more segment with Governor Mike Huckabee.

Hewitt: So Governor, just to put a cap on that, if the Supreme Court rules 5-4 that every state must allow two people of the same sex to get married, what’s your position on the campaign trail going to be about what governors ought to do in the aftermath of that ruling, and what presidential candidates in the Republican Party ought to say about it?

Huckabee: Well, if the federal Supreme Court rules that same sex marriage is protected under the 14th Amendment, you still have to have Congress and the President act to agree with it, because one branch of government does not overrule the other two. This idea that a judge makes a ruling on Friday afternoon, and Saturday morning same sex marriage licenses are being given out, that’s utter nonsense, because there’s not been any agreement with the other two branches of government, so I just want people to go back to their 9th grade civics class, and remember there are three branches equal, and that all three of them have to be in concert in order for something to become law. And the courts can’t make a law, and they don’t have the power to enforce a law.

Hewitt: Would you counsel civil disobedience to county clerks?

Huckabee: Well, the point is states would be in a position that their legislatures would have to go into session. They would have to create legislation that the governor would sign. If they don’t, then there is not same sex marriage in that state. Now if the federal courts say well, you’re going to have to do it, well, then you have a confrontation. At that point, somebody has to decide is the Court right? If it is, then the legislation will be passed. It’s not unlike we’ve seen other legislation. In my own state, when we had school funding legislation that had to be passed, the courts ruled, but we didn’t start sending out checks the next day. We called a special session, we negotiated through it. The courts didn’t tell us what the formula had to look like. They just told us the one we had wasn’t Constitutional. In that case, I agree with them. They were right. We fixed it.

Hewitt: There’s an echo in that, though, Governor. Last night, because it was Martin Luther King day yesterday, I went and saw Selma. And the great judge, Frank Johnson, issued an order that allowed the marchers to march. And George Wallace had to get out of the way, and it’s a dramatic confrontation. There is issue here of the Supremacy Clause. Now I might not like, and I’m praying that Anthony Kennedy decides this the right way, that states have a right to define for themselves marriage. But if it goes the other way, don’t we have to follow what the Supreme Court says immediately, or aren’t we in contempt of the federal Constitution as we understand the Supremacy Clause?

Huckabee: But if the legislation in that state, if the law in that state does not already have a mechanism to support same sex marriage, the legislation and only the legislature can create the law that says a marriage license can be given to two men or to two women. And I think there’s going to be immediate cases filed where a person will say well, I’d like to marry two women, or I’d like to marry two men for a woman. And who’s to stop that? It’s going to be a tricky thing, but you know, when people say the law is now the law of the land and it’s settled, well, 1973, the Court ruled on Roe V. Wade, and I think it’s anything but settled. And it’s anything but something that has ended because the courts made the ruling. I think it was a terrible ruling they made in 1973. And I hope this Court realizes that this is not a decision that should be made by the judicial branch. It should be made by the legislative branch, the representatives of the people.