A Few Even Registered AFTER They Died 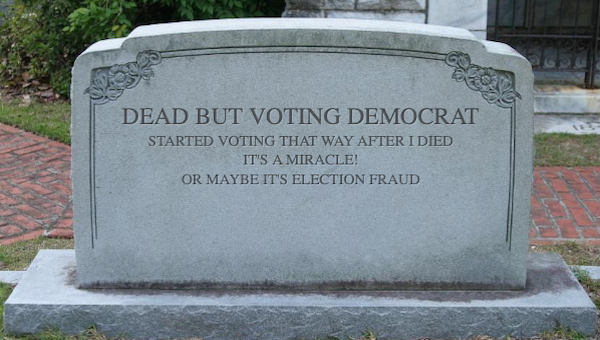 One of the things I tell my family is after I die (which should be a long time from now), PLEASE don’t let me vote for Democrats.  Democrats are still experts at getting dead people to register and vote in elections. Some would call it election fraud, but the Democrats and the MSM would deny that election fraud exists even the charges of fraud made before the 2020 election. Michigan has proven to be excellent in raising the dead for election purposes. Note: we’re talking about individual dead people, not Detroit’s dead football team.

According to the Federalist, a new lawsuit has been filed against the state of Michigan to force it to finally eliminate all the dead Democrats — like it is supposed to be doing by law.

In the lawsuit filed by the Public Interest Legal Foundation, or PILF, a nonprofit law firm dedicated to election integrity, the group alleges that the Michigan Secretary of State’s Office, headed by Secretary of State Jocelyn Benson, violated Section 8 of the National Voter Registration Act of 1993. That federal law requires states to “conduct a general program that makes a reasonable effort to remove the names” of voters who have died.

In its 20-page complaint, the PILF detailed efforts it had made beginning in the run-up to the 2020 election to ensure Michigan voter rolls did not include deceased individuals. After obtaining data from the state in early 2020 and then hiring a data analysis expert who cross-checked the data against commercial databases and information obtained from the Social Security Administration, the PILF determined the current Michigan rolls included approximately tens of thousands of individuals who appeared deceased.

Not only did this group find 25,000 dead voters, but they also found that 334 of the names on the voter rolls had been registered after the voter had died. Registering to vote after death? That’s gotta be God’s biggest miracle since the 1980 NY Mets.

Of these newly registered dead people, the group said, “there is no way to know for certain whether these post-death registrations are the result of identity theft, data input error, or for some other reasons.

“How many of these dead people actually voted is not known because the state refuses to say.”

Parts of this post were first seen at Washington Exterminator