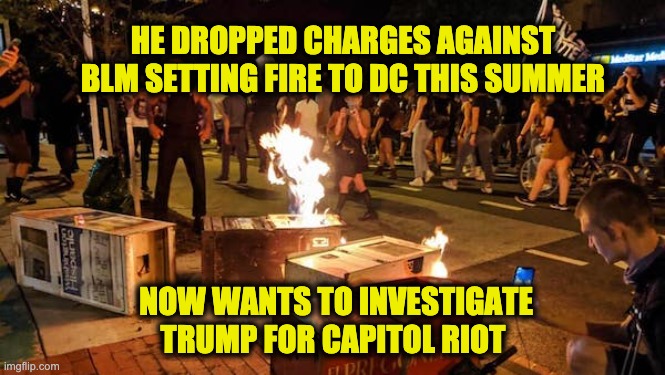 Michael Sherwin, a federal prosecutor, questioned about President Trump’s role in the Capitol riots, refused to rule out criminal charges against the POTUS. He’s the acting U.S. Attorney for D.C. and has repeatedly assured reporters in a press call that he would investigate and charge “all actors” involved in Wednesday’s riot.

In September, though, at the height of the Black Lives Matter riots across America that saw vandalism and arson at an exponentially greater degree, Sherwin dropped charges for all but one individual in his district. “Noting the mass arrests three weeks ago of 42 people who police said were in a group that spray-painted buildings and set fire to patio umbrellas … acting U.S. attorney Michael Sherwin told Bowser in his own letter that he had no choice but to drop charges against all but one defendant,” the Washington Post reported.

Journalists pressed Sherwin about Trump’s speech and what motivating factor it may have been in inciting supporters to storm the Capitol.

“I don’t want to sound like a broken record,” Sherwin said following a question specifically about the President.

“I’m going to stand by my earlier statement – we’re looking at all actors here, and anyone that had a role and the evidence fits the elements of a crime, they’re going to be charged.”

Asked whether the U.S. Attorney’s office will scrutinize Trump's role in inciting the storming of the Capitol, Michael Sherwin, the acting U.S. Attorney in Washington, said that “all actors” are being looked at https://t.co/7rlQGd3JhX

In a letter to Washington, D.C. Mayor Muriel E. Bowser, Sherwin advised that “facts and evidence will dictate criminal charges, not political leveraging or personal agenda.”

His letter was in response to Bowser’s own letter, which accused Sherwin of lacking the “willingness” to prosecute protesters for crimes.

Here's U.S. Attorney Michael Sherwin who suggests he could criminally charge @realDonaldTrump saying in September, in regards to BLM riots, "facts and evidence will dictate criminal charges, not political leveraging or personal agenda."

He dropped charges in all but 1 case. https://t.co/SUJCIcF8JE

The Capitol riots have unleashed Democrats to pursue every avenue they have been fantasizing about over the past four years to remove President Trump from office and destroy his life.

The possibility of criminal charges would be a dream come true for the resistance.

And it would exemplify the double standard applied to Democrats and Republicans when it comes to criminal justice.

It was the left who spent months inciting violent protests and causing riots.

Remember – it was Maxine Waters who told her followers to accost Republicans at the grocery store. It was Cory Booker who told supporters that they need to “get up in the face” of some members of Congress.

It was leftists who attacked Sarah Sanders and Ted Cruz in a restaurant.

Democrats, though, were never threatened with criminal charges.

JUST IN: Senate Democratic Leader Chuck Schumer calls for President Trump to be removed from office via the 25th Amendment. He says if that doesn't happen, Congress should impeach Trump.

“What happened … was an insurrection against the United States, incited by the president."

Democrats and a handful of cowards in the Republican party have been calling for the impeachment of the President despite his term continuing for just several more days.

Some members of Trump’s cabinet are reportedly considering using the 25th Amendment to remove Trump from office before the 20th, with Democrats like Nancy Pelosi and Chuck Schumer gleefully jumping aboard.

They never let this man govern as President from day one. Now they’re going further divide the country and attempt to erase him from history. Once again, they’re proving they put serving their party over their constitutional duty to serve this country.

Cross-posted at The Mental Recession