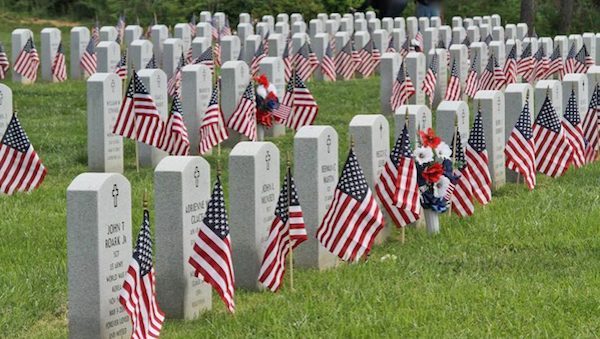 The United States pauses Monday to remember men and women who gave the ultimate sacrifice for our nation.

The day should therefore remain more significant than time off work, a chance to barbecue, or take in a ballgame — though thanks to our veterans, we can enjoy those too.

Memorial Day, however, began 154 years ago when Civil War General and future President James Garfield addressed more than 5,000 families of the fallen at an Arlington National Cemetery ceremony.

Originally known as “Decoration Day” to honor the 650,000 men who lost their lives in America’s bloodiest war, the holiday was observed on May 30 for over a century. It received the original moniker when citizens honored soldiers by decorating their graves with flowers. As years went on, we included all veterans who perished defending the United States.

When established in 1868, most Americans likely memorialized someone they knew who was killed at war. Tens of millions do not know a single person who fought in the War on Terror or mourned with a gold star parent.

A recent Gallup poll noted that fewer than one-third of Americans understood the actual purpose behind Memorial Day. Because they don’t, they cannot understand today’s soldiers and veterans, and that’s another tragedy.

The disconnect should never occur. There are dozens and dozens of easily-accessible films and books about today’s warriors that millennials and elites can take a moment to review.

There are also easy ways to honor fallen heroes by visiting a military cemetery, attending a local parade, or supporting organizations that aid soldiers. I can’t wait for the annual Monday parade in my small Midwestern town.

Enjoying the sounds of freedom with Blackhawks flying overhead at @NASCAR , getting ready to honor those who gave the ultimate sacrifice in service to our country! @foxandfriends #MemorialDayWeekend #everforward #semperfi pic.twitter.com/LlM3sB3XwS

During his call to make Decoration Day a national holiday, Maj. Gen. John Logan, who served in the Union Army, also advised:

“Let us, then, at the time appointed, gather around their sacred remains and garland the passionless mounds above them with choicest flowers of springtime; let us raise above them the dear old flag they saved from dishonor; let us in this solemn presence renew our pledges to aid and assist those whom they have left among us as sacred charges upon the Nation’s gratitude — the soldier’s and sailor’s widow and orphan.”

Two of President Abraham Lincoln’s most-noteworthy speeches mention soldiers’ graves. His first inaugural concluded by invoking “mystic chords of memory, stretching from every battlefield, and patriot grave, to every living heart and hearthstone.”

The Gettysburg Address, of course, was delivered at the dedication of the revered military cemetery in southern Pennsylvania.

Or, as George W. Bush explained during his final Memorial Day speech as president, “The world has been transformed in unimaginable ways because of the noble service and devotion to duty of these brave individuals.”

Freedom always comes at a high cost when you’re an exceptional global superpower. This is lesson one, and one we — especially our insular celebrities, athletes, and even some politicians — need to learn and always remember, particularly on May 30.