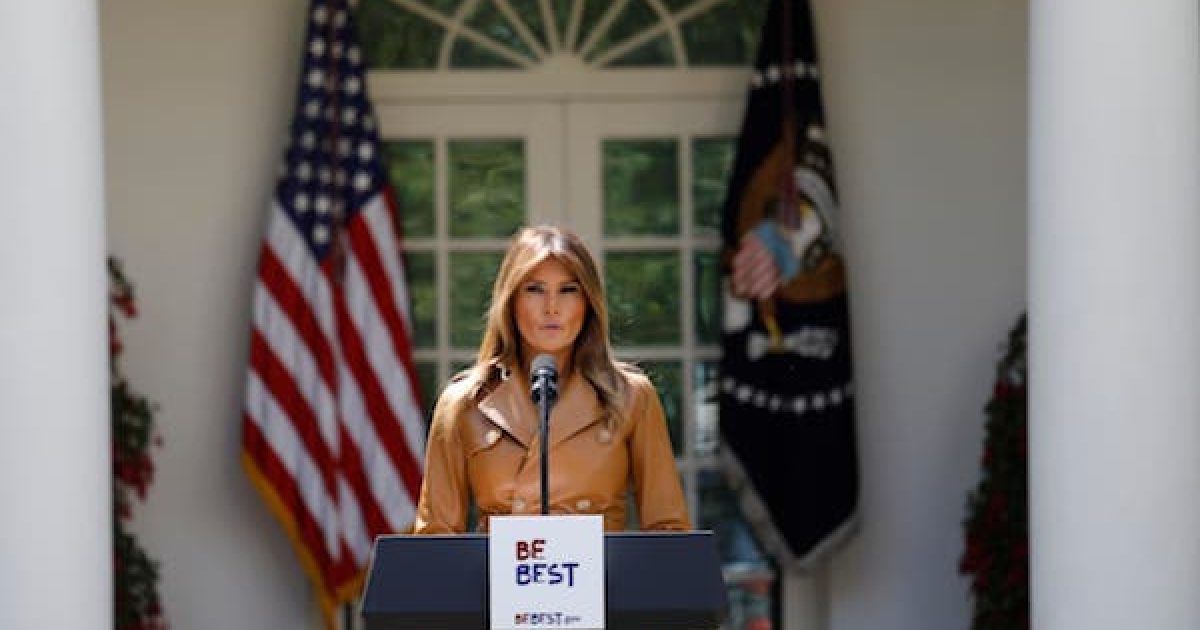 Earlier this week the White House unveiled what will be Melania Trump’s main focus as First Lady. They’re calling it the “Be Best” campaign, and it’s aimed at offering real solutions to the problems that America’s kids are facing.

From the White House:

First Lady Melania Trump today announced BE BEST, an awareness campaign focusing on some of the major issues facing children today.  The goal is to encourage children to BE BEST in their individual paths in life, and teach them about the importance of social, emotional, and physical health.

BE BEST will combat the issues facing children today by championing the many successful well-being programs that teach children tools and skills for emotional, social, and physical well-being.  The campaign will also work to promote the people, organizations, and programs that are helping children overcome the issues they face growing up.  While children navigate many challenges in their daily lives, BE BEST will include three main pillars to include well-being, social media use, and opioid abuse.

WELL-BEING
By promoting values such as healthy living, encouragement, kindness, and respect, parents, teachers, and other adults can help prepare children for their futures.  With those values as a solid foundation, children will be able to better deal with the evils of the opioid crisis and avoid negative social media interaction.

SOCIAL MEDIA
Today’s ever-connected children need our support to find happiness and to prepare themselves for adulthood.  A study by the Clinical Psychological Scienceshows that after 2010, children who spent more time on new media were more likely to report mental health issues than those who spent time on non-screen activities.  BE BEST will highlight the importance of using social media and the internet in positive ways.

OPIOID ABUSE
Opioid dependence, addiction, and abuse are an epidemic in this country.  BE BEST will support the families and children affected by this crisis, bring attention to neonatal abstinence syndrome, and help educate parents on the importance of healthy pregnancies.

“It remains our generation’s moral imperative to take responsibility and help our children manage the many issues they are facing today, including encouraging positive social, emotional, and physical habits,” said Mrs. Trump.  “By acknowledging there are many important issues, and knowing these problems cannot be solved overnight, I believe we can change the way we think and talk about issues facing children today.”

The First Lady launched BE BEST in the White House Rose Garden.  Joining her for the announcement were children who have written to her and whom she has met during her first year as First Lady.  Members of the President’s Cabinet, including Secretary of Health and Human Services Alex Azar and Secretary of Education Betsy DeVos, as well as leaders from the medical, technology, and business communities who work on children’s health and want to be part of the solution.

Details on BE BEST can be found at www.BeBest.gov.

Sadly, what is obviously a wonderful attempt at making the world a better place for our children is being met with the most vicious and ugly attacks from leftist trolls.

Your broken English is charming. Did you mean “Be Better”? Or “He’s A Beast!” ?
Blink once for help and twice for help & vodka.

Excuse me, Melania. If you plan to stay & play in America, can you please use proper English? Some countries’ languages use gender to describe nouns. Some do not use anything. Here in America we use *articles*…it should say “Be THE Best”

This is grammatically incorrect English. ???????? What else would we expect from a foreign trophy wife!!!#TrumpCrimeFamily

I’m sorry with all trump fake money couldn’t they get the Fake First Lady English Lessons, she sounds like a stupid Idiot ! @FLOTUS #Melania #bebest

#BeBest like really @FLOTUS teaching kids broken english! Be Your Best! Be The Best! SMH what is Be Best?????….

Makes no sense at all and really be best? Stupid. Just learn English and muzzle your husband. The end

Melania’s new platform is called #BeBest? Is it supposed to mirror her broken English?

Thankfully, there were some folks online who remembered that it wasn’t supposed to be okay to mock immigrants for the way they speak

So I guess it is cool to mock folks when English isn’t their first language now? Is it just the Melania or all all immigrants fair game?

I’m just curious how much the ground rules have changed in the last year because I was brought up to think that’s always wrong ???? https://t.co/ul8oPVB1YR

She’s probably smarter than you so you should probably shut up. pic.twitter.com/gUzKAyFWhb

I watched reporters and commenters make fun of Melania’s accent today during her White House speech.

Just a quick reminder for you idiots:

• Melanija Knavs was born in Yugoslavia under communism
• She was raised in a tiny apartment by her working-class communist parents
• As a teen, she was given a work-visa to model outside of the communist dictatorship
• She worked as a model around the world, eventually breaking into the European fashion scene after the Berlin Wall fell
• She emigrated to the US in 1996 on a ‘Genius Visa’
• She speaks six languages: English, French, Italian, German, Slovene and Serbo-Croatian
• Melania is the second-ever First Lady to be born outside the United States

So before you make a joke about her, just remember: Melania Trump has had a tougher life than you.
She is an American success story.
And unequivocally one of the most accomplished First Ladies in modern history.