The Marxist Democrat Party Has A Gift For Our Children: More Covid-19 Straight From The Border. 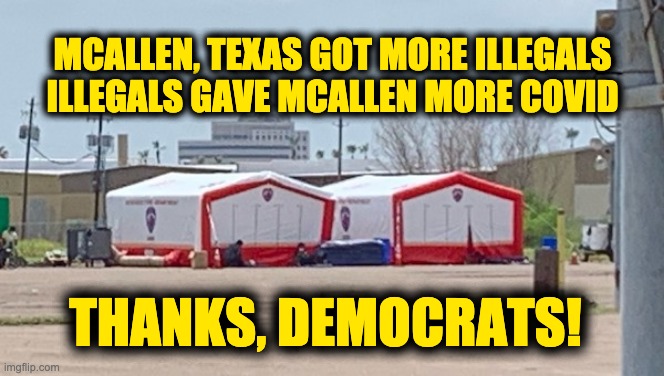 In 1590, Spanish troops under the command of Cortez arrived in the Aztec Capital City, Tenochitlan. The Aztec emperor Montezuma welcomed them. Cortes brought with him a gift to the people of that great city. One which killed half the population within six months:

The dreaded disease of Smallpox

Today, the Marxist Democrat Party brings the children of America a gift over the Southern Border. The Biden, Obama Regime is hiding the truth. Instead, they’re using the big lie that the illegal immigrants are tested, treated, quarantined. Nothing could be further from the truth. Let’s take a look at just one little Texas border town as an example of what’s actually happening:

The Respite Center has capacity for only 1,236 occupants and will not allow more than its maximum occupancy at any given time. Therefore, beginning in August 2021, there has been a significant threat of leaving hundreds on the streets of McAllen with no place to turn for food, shelter, medical attention, or other humanitarian services. It was at this point that McAllen Mayor Javier Villalobos saw no option other than to declare a Local State of Disaster in McAllen so the City of McAllen could obtain necessary county and state resources to address the situation that it did not create.”

To make matters worse, according to the statement, Border Patrol released at least 7,000 people into the city who later tested positive for COVID-19, with over new 1,500 COVID cases in just the past week.

“Despite the City of McAllen and its community partners’ best efforts, the sheer number of immigrants being released into the city has become a crisis: a crisis the City of McAllen did not create and has proactively tried to avoid for seven years. Now, with the drastic, unexpected increase of immigrants arriving to McAllen, the City Commission’s first priority is to protect the health and safety of the residents they serve,” the statement added.

“Do you know how many people have come across the border illegally so far this year?
According to the U.S. Customs and Border Control, it’s 1.1 million people — and the numbers are rising every month.

WHY WOULD THE MARXIST DEMOCRATS DO THIS TO AMERICAN CITIZENS? WHY UNLEASH THE DEATH AND DESTRUCTION OF COVID?

Simply to cause the collapse of society. Economically, socially, health-wise, and in every way. So they can impose the Marxist police state.

SOMETHING SPECIFIC YOU CAN DO TO PROTECT YOUR FAMILY

The struggle will be lost unless we stand against the deception.

Form activist organizations and direct the flood of illegal immigrants to the front door of every Democrat state and federal lawmaker. And why not, since it is the Marxist Democrats who are bringing them in and profess love for them.

Now let the individual Marxist lawmakers prove their love. Will they take these “undocumented immigrants” into their homes? Or into their neighborhoods?

Let this experiment actually happen. When we stand up against liberal deception, we win.