Seventeen Cops Hurt At Chicago ‘Peaceful Protest,’ The Mayor Is Finally Doing What She Should Have Done All Along—Praising The Cops 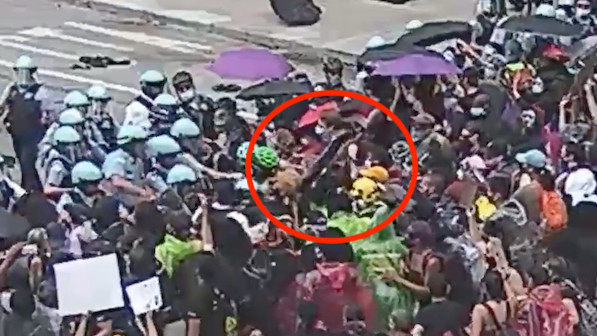 Look at Chicago’s Mayor Lightfoot for instance. Yikes. Sorry about that mental image.

Look at what she’s saying, anyway.

After rioters tore up her city, she’s suddenly softened her tone about just how useful law enforcement can really be. On the August 16th episode of CBS Face The Nation, she talked about the violence in the city the day before and did what she should have done long ago, she praised the police.

Unfortunately, what we’ve seen in cities all across the country, not just Chicago, is a continuing wave of protests. The vast majority of these have been peaceful. But what we’ve also seen is people who have embedded themselves in these seemingly peaceful protests and come for a fight. So, what happened yesterday was really over very fairly quickly because our police department is resolved to make sure that we protect peaceful protests. But we are absolutely not going to tolerate people who come to these protests looking for a fight and are intending to injure our police officers and injure innocent people who just come to be able to express their First Amendment rights.

The demonstrations started Saturday with a march around noon. Later, a separate demonstration near downtown resulted in two dozen arrests, 17 injured officers, and at least two injured protesters.

…Chicago Police Department Superintendent David Brown said that some in the group used black umbrellas to make it harder for police to see them, pushed officers and assaulted them.

In one video released by Chicago police, a person swinging a skateboard strikes an officer

He struck the police officer with the skateboard repeatedly.

The following video footage shows the initial incident that sparked yesterday's violence and arrests, as well as the aggravated battery against a CPD officer with a skateboard. More video will be released throughout the day as it is received. pic.twitter.com/oW7Z3oGKSZ

Thankfully the jerk with the skateboard was arrested:

Chicago police have arrested a man they say attacked an officer with a skateboard during a clash between demonstrators and police on Saturday in the Loop.

According to authorities, 25-year-old Jeremy Johnson has been charged with felony aggravated battery to a peace officer after the incident, which occurred near the intersection of Wacker Drive and Michigan Avenue on Saturday afternoon.

Of course, the activists — of whom only 2 had any reported injuries — are complaining that the police were brutal and thuggish.

The injury tallies put the lie label on that complaint.

It’s good to see that Chicago’s Mayor Lightfoot is finally beginning to understand that the Chicago PD risks their lives on a daily basis to protect the citizens of the Windy City (and even their leftist Mayor).