Maybe they should be called NON-Jews for Jesus 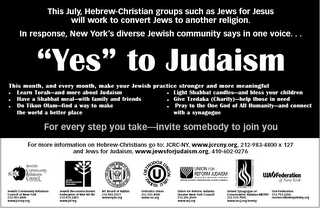 Yep…the “Jews” for Jesus are Back and bigger than ever. These so called Jews, once again are using deception to elicit conversion from the Jewish Community. I was in NYC for the 4th and saw them all across the city, especially in the subway terminals. Today I even heard them on FOX News, complaining about not being able to use the official subway logos on their T-shirts blaming New Yorkers outside of the subway department for their troubles (like the real Jews).

These People are not real Jews. They are calling themselves Jewish so they can target real Jews for conversion. . You never see Hindus for Jesus? Moslems for Jesus? or Titan Fans for Jesus (actually having gone to many Titan’s games, I would believe that this one exists)

They call themselves Jews for Jesus even though most of its members were not born Jewish or officially converted.

And those few were born Jewish…how many of them studied Torah with a Rabbi ordained from a recognized Jewish Seminary (they call their leaders “rabbis” even though none of them have ever graduated from a Jewish)?

Do you think any have studied Torah in Hebrew?

Have any of those fake Jews who worship the Christian G-d, read about Elijah and the prophets of Baal? If they had they would realize that a Jew couldn’t follow two masters.

To paraphrase Rabbi Kravitz from his book, The Jewish Response to Missionaries, A Jew who follows another religion is Jewish only to the point that he/she retains the obligation to perform Teshuvh, repent and to return to Judaism.

The Rabbi goes on to say

as long as his beliefs are idolatrous and foreign to Judaism, he cannot call himself a Jew. (It is important to note that a non-practicing Jew is different from a Jew who has chosen to follow a foreign path.) The Torah teaches that Jews and non-Jews are given different paths to reach G-d. A Jew is obligated to follow the Torah, while a non-Jew must observe the Seven Laws of the Children of Noah. One group isn’t better than the other, merely different. Therefore, certain beliefs and practices, like eating pork, are permissible for non-Jews but not for Jews. Similarly, the majority of Christian beliefs concerning G-d, salvation and the Messiah do not violate the Noahide covenant for non-Jews, but are absolutely forbidden for Jews. That is why the term “Messianic Jew,”“Hebrew Christian,” or “Jew for Jesus,” is a contradiction.

.. I am sure that none of them have read the parts of the Leviticus warn us about the Navi Sheker (false prophet)

If there will arise among you a prophet, or a dreamer of a dream, and he gives you a sign or a wonder. And the sign or the wonder of which he spoke to you happens, [and he] says, “Let us go after other gods which you have not known, and let us worship them.” You shall not heed the words of that prophet, or that dreamer of a dream; for the L-rd your G-d is testing you, to know whether you really love the L-rd your G-d with all your heart and with all your soul.

….or the verses about the permanence of our covenant with G-d.

Yet in spite of this, when they are in the land of their enemies, I will not reject them or abhor them so as to destroy them, breaking My covenant with them. I am the Lord their G-d. But for their sake I will remember the covenant with their ancestors whom I brought out of the land of Egypt in the sight of the nations to be their G-d. I am the Lord

Warn your friends, your kids and your friends kids about these people, they are dishonest in their ways…They wear Chais to make you think they are Jewish, they call their Ministers Rabbis, their Churches temples and on and on…They are are wolves in sheep’s clothing, trying to make Jews feel comfortable so they can convert them.

MayI suggest some really good reading from the Jews for Judaism Website:
http://www.jewsforjudaism.org

The Jewish Response to Missionaries by Rabbi Bentzion Kravitz is availible as a PDF on that site as well as Dealing with Missionary Tactics.

There is a lot more information on the Jews for Judiasm site I highly recommend you take a look BEFORE you have to deal with the problem.

And spread the word..Just like they are trying to do with the ad at the top of the post.