Maxine Waters Claims She Never Called for Violence, After Watching Video of Herself Calling for Violence 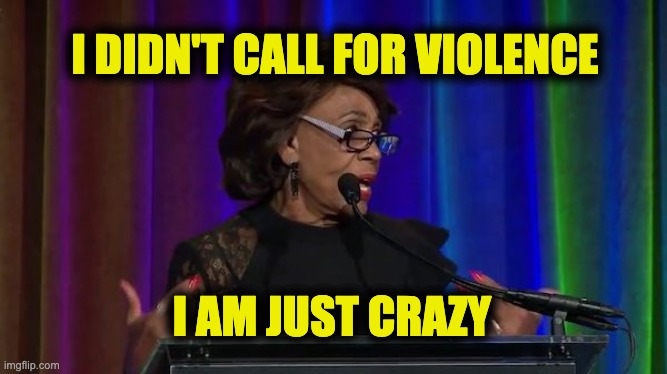 Congresswoman Maxine Waters has been quite the rabble-rouser as of late, flinging fiery vitriol from all corners of the liberal spectrum each and every time she’s allowed to do so. One of her most infamous incidents came as the California legislator demanded that her constituents confront Republicans wherever they are, making them feel unwelcome and uncomfortable. Maxine Waters violence.

However, when confronted with this reality on by MSNBC’s Ali Velshi Waters seemed to deny what she had insinuated, evenn after being forced to watch a clip of the call to action during the interview. Velshi asked Waters on Sunday if she had ever “glorified or encouraged” violence against Republicans, as her comments about confronting members of the Trump cabinet  have recently resurfaced because of the Democrats’ fake impeachment of President Trump (Waters, Velshi interview at bottom of post).

As you can see  in the Velshi video embedded at the end of this post, In 2018 Waters told she supporters “Let’s make sure we show up wherever we have to show up, and if you see anybody from that Cabinet in a restaurant, in a department store, at a gasoline station, you get out, and you create a crowd, and you push back on them. You tell them that they’re not welcome anymore anywhere! We’ve got to get the children connected to their parents. The children are suffering.”

But in 2017 she didn’t go after the cabinet. She went straight after the president telling an audience that she will “take Trump out tonight.”

On Super Bowl Sunday she denied it all:

Anchor Ali Velshi said, “I was able to play that clip that you were referring to from June 23rd, 2018, where you’re asking people to confront Republicans at department stores, gas stations, and restaurants and tell them they’re not welcome. That’s the stuff that Donald Trump’s attorneys say proves that you and others are doing the same thing Donald Trump was doing on January 6th and in the days before that. What’s the difference?”

And here’s where it gets wild:

Velshi said, “So let me ask you because this is what they’re going to say. Can you say that you have not glorified or encouraged violence against Republicans?”

Watch the video of Mad Maxine trying to deny the meaning of what she said, below:

Parts of this post was first seen at Liberty Hub