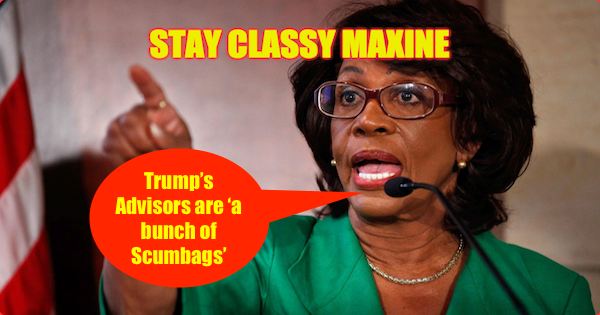 Waters:: Can’t people see what’s going on? Why do you think they hacked into our election? They hacked into the election because they have to make sure that Donald Trump got elected. So that he could help them with what I think is a huge deal. Not only to lift these sanctions, but to take over all of these Soviet countries and pull them back into the Soviet Union so that they can have access to all of these resources. It’s clear to me. And I just think the American people had better understand what’s going on. This is a bunch of scumbags. That’s what they are —

To his credit Hayes gave Waters an opportunity to back away from her comments. But Waters again said that they are scumbags. Hayes asked if that label included Tillerson, to which Waters said that Tillerson’s job is to get sanctions on Russia lifted.

Hayes: Who do you mean that when you call them scumbags? Who are you talking about?

Waters:: All of these people that are organized with these oil and gas interests that’s in the administration and friends of the president of the United States. This back channeling that you see. These are a bunch of scumbags, that’s what they are.

Hayes:: You mean the Secretary of State of the United States?

Waters: Well, I tell you this, Tillerson is there to get these sanctions lifted. I believe it, just watch him. He’s going to continue to work on it. This is important for him. He was there because he negotiated the deal for Exxon with Putin.

At that point the interview ended with Hayes saying, “All right, well that`s going to — there’s going to be a big fight over that, if that happens. Congresswoman Maxine Waters, thanks for your time tonight. I appreciate it.”

On the bright side, this time Waters didn’t claim that Vladimir Putin invaded Korea as she did two weeks ago when she called for Trump to be impeached. Watched the video below: