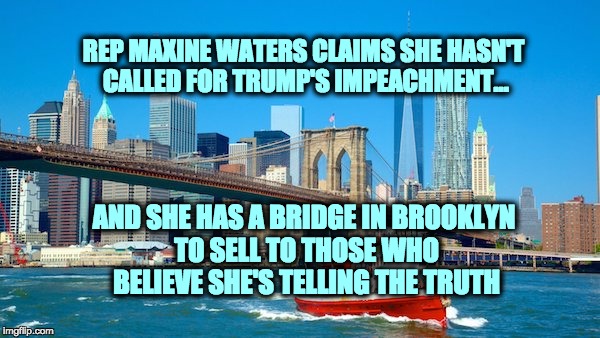 Maybe it’s the pressure of trying to maintain her position as the most corrupt person in Congress, driving Rep. Maxine Waters to have memory problems. The California Representative began her day repeating what she’s been saying since inauguration day, President Trump should be impeached.

The President is a liar, his actions are contemptible, & I’m going to fight everyday until he’s impeached.

Just short of five hours later, she was interviewed on MSNBC and Waters told host Craig Melvin that denied that she never called President to be impeached (see video at the bottom of the post).

Melvin began by asking Ms. Waters about her early morning tweet–sending her into a rant crazier than the usual Russian hacking tale–her version involved Rex Tillerson and oil deals:

“The question becomes was there colluding? Did this campaign — did this president and his campaign and/or allies — collude with the Russians in doing the hacking and undermining our democracy?

We know that Putin hated Hillary, they worked in some ways to try to support Trump to get elected. They got what they wanted We know that Tillerson, for example, who’s never been in government before, who came from Exxon, negotiated a multibillion dollar deal with Putin to drill in the arctic and so we have enough information that leads us to, I think, a credible investigation to find out whether or not there was collusion and whether or not an oil deal is involved with all of this

Melvin interjected, asking Waters if lawmakers should wait for all the facts to come out before suggesting Trump has committed impeachable offenses.

“I have not called for impeachment,” Waters said.

For a moment the MSNBC host looked as if he was expecting to hear the Twilight Zone theme to start and Rod Serling voice to come from the sky, “Imagine if you will a TV host interviewing a crooked and crazy congresswoman…..”

Since Serling’s voice didn’t show up Melvin said (sounding a bit stunned) “You said, ‘I’m going to fight every day until he’s impeached!’ That’s what you tweeted,”

“Yeah, but here’s what I’ve said, I’ve said that we need the information. We need to connect the dots. We need the facts in order to do the impeachment, and I’m going to work every day to try and help get those facts and to reveal them to the republic, to our public, until of course impeachment has taken place.”

Her most recent call for impeachment was this past weekend. The congressional crook was speaking at a Tax Day anti-Trump rally;

When Waters was caught with her hand in the congressional cookie jar, helping unsound bank (OneUnited) receive government aid to help her husband who was an officer and stock-owner of the bank, Waters found a way to lie and blame it on her grandson. So maybe her claim of never calling for Trump’s impeachment has nothing to do with memory loss perhaps lying to her is as natural as breathing is for the rest of us.

Below find the video of Waters and Melvin.