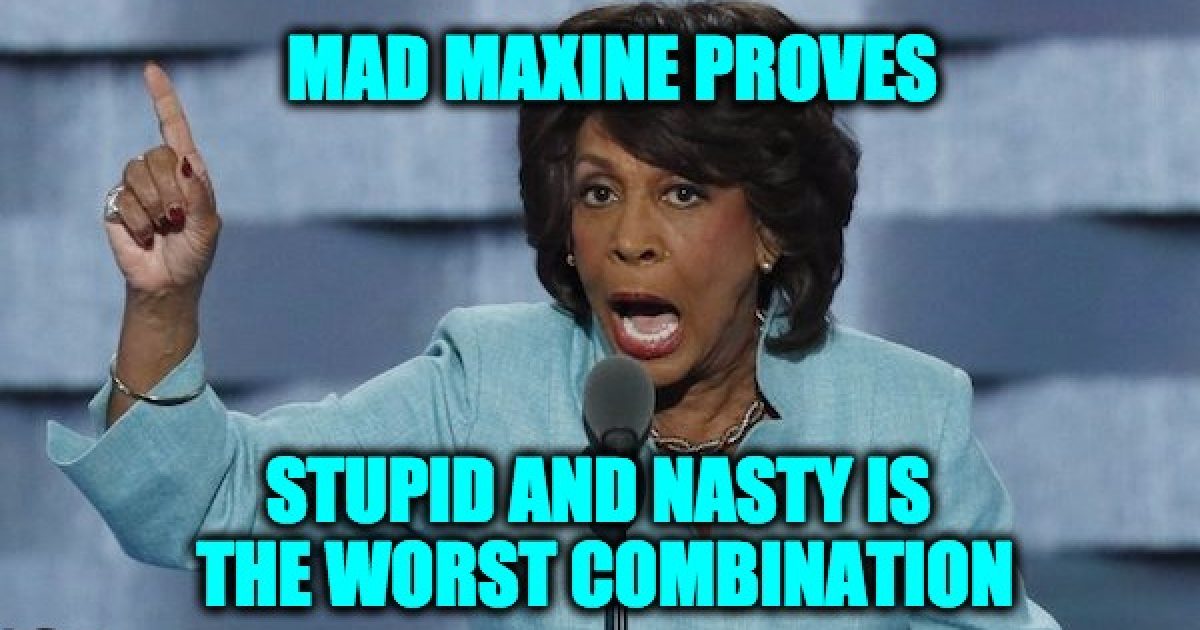 So far in 2017, it seems as though the Democrats are more concerned with hindering the American President than helping the American people.It’s a vile piece of political reality that has reared its ugly head during the first year of President Trump’s time in the Oval Office, and it has exposed many liberals for what they are:  opportunistic obstructionists hellbent on undermining America for their own political gain. One of the worst offenders is mad Maxine Waters (D-CA), a woman who has been calling for the President’s impeachment since he was elected last November

Every syllable uttered by the Commander in Chief has been dissected, deposed, and discarded by the political left via the exploitation of the mainstream media – a tool that has long been under the control of the progressives.  President Trump can do no right in their eyes, and their pathetic attempts to link everything negative back to the Donald Trump has been annoying at best, and pathetic at worst.

Now, mad Maxine the looniest leftist in the liberal asylum has taken her hatred of The Donald to new levels by violating an entire crowd of AIDS activists and victims by turning her “non-political” appearance at a benefit event into an anti-Trump stump speech.

“It took less than three minutes for Mad Maxine to shift the focus during a recent speech at the 2017 AIDS Walk Los Angeles from the progress made to combat the sexually transmitted disease to her never-ending campaign to impeach President Trump.

“Waters took the stage in front of Los Angeles City Hall on Sunday for the opening ceremony of 2017 AIDS Walk, and quickly turned the event into a platform to push her political agenda. The speech follows similarly inappropriate comments about Waters’ campaign to impeach Trump she delivered during a eulogy for comedian Dick Gregory last month.

“’We face unprecedented challenges today in our struggle against HIV and AIDS and I want you to know those people in Congress on the opposite side of the aisle from me control every branch of our federal government,’ Waters said. ‘And we have, unfortunately, an unstable, erratic person in the White House.’

“Waters then announced ‘this is not a political event’ before delving back into partisan politics.

“’We don’t know what this president will do, or say, or tweet from one day to the next. Don’t forget, this is not a political event, but I’m heading toward impeachment,’ Waters said with a chuckle.”

Maxine Waters has long been considered one of the more “out there” Democrats, but even her own past transgressions had not prepared us for the insanity that she has so deftly woven into her speech about AIDS.

Again, we are seeing a troublesome turn on the political left, Waters’ speech notwithstanding.  The entire ethos of liberalism in this country is simply aimed at damaging the most powerful man in the world and the leader of our great nation.  There is no unity on the horizon for these bleeding heart liberals, only hatred, and political upheaval until they get their way.  They are brats, plain and simple, and now they are stepping on the backs of sick Americans to make their tired points.