It Was A Bloodbath! Alan Dershowitz vs Maxine Waters 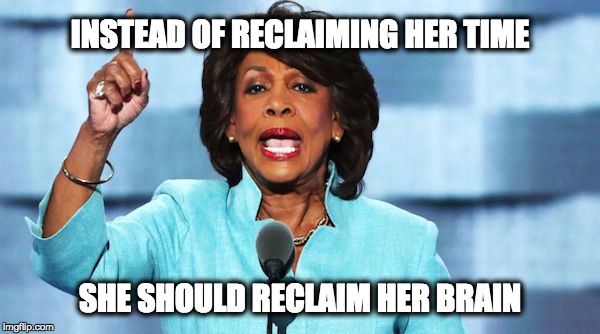 If anyone is still looking for proof that Maxine Waters is a few fries short of a happy meal this should do it. She got into a battle with Alan Dershowitz and it was a bloodbath. I almost felt bad for the crazy lady.

On Friday the very liberal attorney and former Harvard Law told ABC radio’s Rita Cosby that the fact that the Russia investigation grand jury impaneled by Muller was formed in Washington D.C meant that if there was a trial, it too would be in D.C, and that was stacking the deck against the President.

“It gives the prosecutor a tremendous tactical advantage… the case now can be brought not in Northern Virginia, which is a swing area, sometimes Democrat, sometimes Republican… but the District of Columbia, which is always solidly Democratic and has an ethnic and racial composition that might be very unfavorable to the Trump Administration.”

When asked by Cosby if he thinks this geographic move stacks the deck against the President, Dershowitz definitively says “Yes, I do.”  He further adds, “I think it’s a tactical move designed to send a message that if the prosecutor decides to prosecute, he will have a real advantage with the jury pool where the case will be held.”

Later that day on MSNBC’s Chris Hayes program the host asked the crazy Congresswomen from California if she thought the location of the grand jury was unfair. Of course, Maxine Waters didn’t think so:

“Oh it’s absolutely unfair,” said the crazy lady, “What he is saying is ‘all of those black people are there and they don’t like Trump and so he’s not going to get a fair trial and so they should take it out of that jurisdiction. It shouldn’t be there to begin with.’ I don’t like that, and I’m surprised that Alan Dershowitz is talking like that. We will not stand for it. We will push back against that because that is absolutely racist,”

That’s the same Alan Dershowitz friend of the Democrats who supported liberal candidates black or white, who even supported Barack Obama’s campaign verbally and financially despite the fact that Obama is an anti-Semite. The same Alan Dershowitz that helped O.J. Simpson beat the murder charge by convincing a jury that Simpson was only charged because he was black. THAT Dershowitz.

Dershowitz added that crazy Maxine Waters calls people racist too much which weakens its effect.

“If I had said that race didn’t matter, she would have called me a racist. She throws around the term so loosely and so inappropriately, and it weakens her credibility just by calling everybody a racist by calling me a racist when she calls real racists racist nobody is going to believe her.”

Then he added the “money line:”

Any experienced lawyer understands that both prosecutors and defense attorneys look at factors like ethnicity, race, political affiliation when they decide what venue is best for their case. Race and ethnicity is part of everyone’s life experience, and Maxine Waters more than anyone ought to know that.

Excellent retort counselor.  Although it was an unfair fight, after all when she offered to donate her brain to science she forgot to ask them to wait until she died.