Antifa ‘Commander’ Armed With Flamethrower Burst Into Tears During Arrest

There's No Crying In Rioting 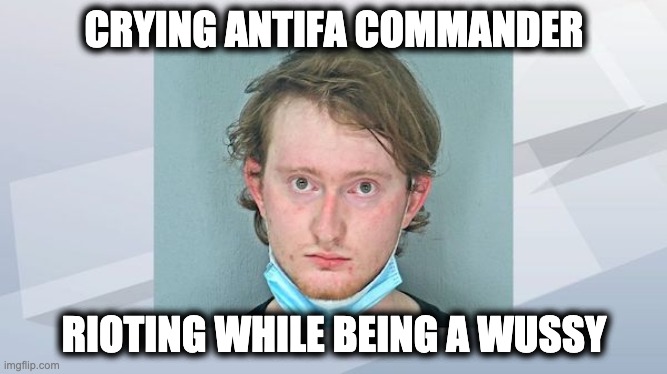 Bullies, like those in Antifa, generally are cowards. Proving that point was 23-year-old, Matthew Banta is a Wisconsin Antifa member who goes by the tough-sounding nom de plume of “Commander Red.” Banta was caught by police with a flamethrower, fireworks, and smoke grenades on his way to a demonstration. When police caught to Red. he “dropped into the fetal position and began crying,” the officer said.

According to WBAY, Green Bay, Matthew Banta,  “known to be a violent Antifa member who incites violence in otherwise relatively peaceful protests.” He has a police record detailing violent incidents and was out on bail at the time of his arrest.

A responding officer says he saw four individuals walking towards a protest with baseball bats. One man was wearing a metal helmet with goggles and military-style gear with multiple pouches, and was carrying an Antifa flag. When the officer pulled his squad car in front of the group, they ran away. The officer caught Banta, who was carrying the flag, and says Banta “dropped into the fetal position and began crying.” He accused the officer of lying on him; the officer replied nobody was on him.

While it wasn’t reported, it is assumed that the “brave” Antifa terrorist was calling for his mommy as he cried during his arrest.

“Matthew was brought to the front of my squad, where Matthew was identified as “Commander Red” from an informational bulletin sent out through department email. Matthew is known to be a violent Antifa member who incites violence in otherwise relatively peaceful protests. As Matthew was under arrest for Resisting arrest, I began searching him incident to arrest. While searching him, I located two “military grade 5 minute” smoke grenades. I also located in his bags on his person two firework rockets that had “Apache” printed on them. Also located in the same bag a bundle of bottle rockets banded together with plastic wrap, a flamethrower with a propane tank was found inside. Medical bags containing miscellaneous medical equipment and antifa stickers, belt with pouches containing rocks. Also taken from Matthew as evidence was his; Antifa flag, empty green bag, metal helmet, and metal scraper,” the complaint states. “Matthew stated that he was going to the protest, but denied that he was trying to incite a riot. Matthew also denied knowing that the protest was declared an unlawful assembly.”

Banta disputed the description of the flamethrower in court. He called it a tool, a “hand torch,” without a propulsion system.

Banta acknowledged he was headed to the Green Bay protest but denied he was planning to incite a riot. Sure walking toward a protest wearing a helmet and carrying a baseball bat, a flamethrower, smoke grenades, and fireworks and was trying to make peace. Maybe he was heading to the protest so he could sing happy birthday to his favorite cop. I doubt it though because when he was arrested Commander Red was out on bail after being charged with biting and kicking a cop at a protest earlier this month and pointing a loaded gun at a police officer during that same rally. So I get the feeling that he is not a fan of law enforcement.

Commander Red was charged with obstructing an officer and two counts of felony bail jumping. He should have been charged with inciting a riot while acting like a yellow-bellied wussy and crying for his mommy.