Oh My! Now Math Is Racist 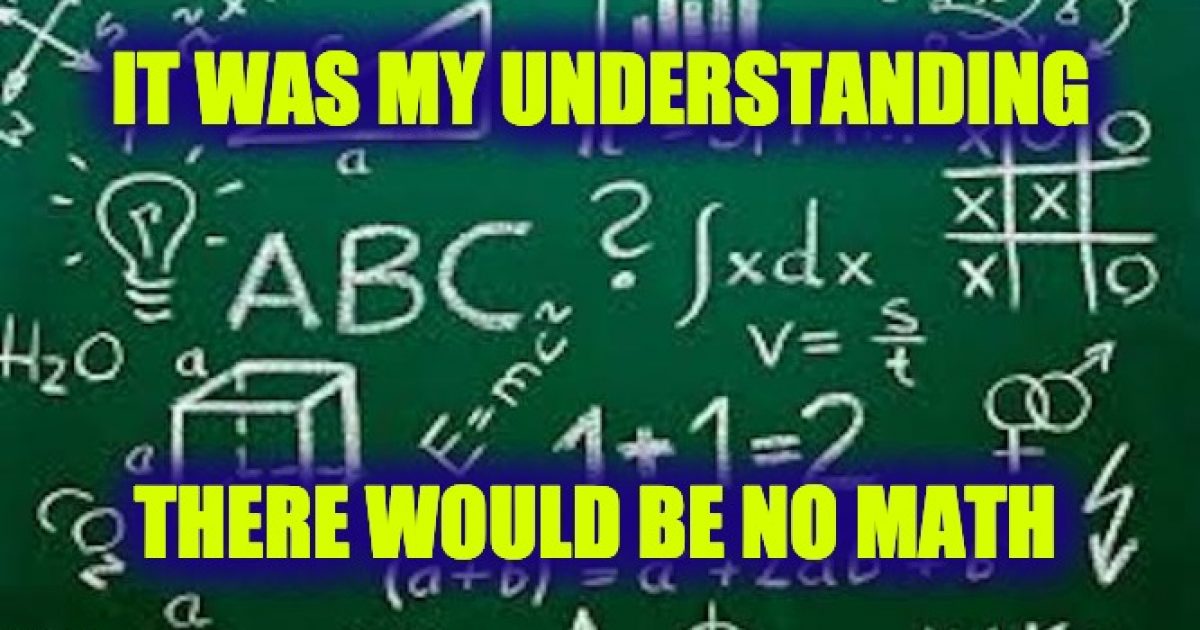 Before going on, you should know–I hate math!  My Algebra grade was in the high 90s, but geometry followed, and I barely passed. In my junior year, I was forced to take trigonometry. The only reason I didn’t get a failing grade in trigonometry was that the boys in the Solomon Schechter School in Brooklyn (a Jewish day school) stole the trig regent’s exam (the NY State-wide test) and it was canceled. Those boys will have a special place in my heart till my dying day. Well, they didn’t steal the entire test, just the answers, and made some money by selling the answers until they got caught. ma the answers until they got caught. math is racist

But now almost 45 years later there’s a new reason for skipping math.  According to the Seattle Public Schools Schools Ethnic Studies Advisory Committee (ESAC)  math is racist, and they’ve  empowered a committee to review the district’s math curriculum with an eye toward taking the “racism” out of math, and the committee is suggesting a new “framework” that tries to eliminate the idea that western math is the “only legitimate expression” of math.

But math isn’t all western. Algebra was created by the Arabs. The very name algebra comes from the title of a book by Muhammad ibn Musa al-Khwarizm in the ninth century.  Al-Khwarizm lived in Bagdad, which makes me wonder when he was writing about algebra was he riding his camel all around the city trying to find X?

The new Seattle Schools framework is broken into four different themes: “Origins, Identity, and Agency,” “Power and Oppression,” “History of Resistance and Liberation,” and “Reflection and Action.

According to KTTH in Seattle:

The framework believes math is manipulated to allow inequality and oppression to persist. They ask, “Who is doing the oppressing?” I think the answer is supposed to be the white, cis-gendered, heterosexual Christian man.

They ask, “How has math been used to resist and liberate people and communities of color from oppression?”

Ironically, if you subscribe to this social justice world view of math, and teach anyone that there’s no such thing as correct answers, you will be doing immeasurable and, yes, oppressive, harm to students.

“The goal is to disrupt the status quo and do something different,” said Tracy Castro-Gill, the ethnic studies program manager at Seattle Public Schools.

Castro-Gill says their research shows a disparity in the district between white students and students of color. Graduation rates and tests scores are lower among students of color compared to their white counterparts.

“The data is clear. We were not serving our district students of color,” she said.

So the committee says math is a racist study used to oppress students — if you correct a student’s faulty math logic, you’re racist. They forgot to mention that math is also anti-Semitic. After all, I had a significant problem understanding geometry, and trigonometry, the curriculum, and two of the entrepreneurial students who stole and started selling the regent’s answers were expelled from the Jewish day school.

I consulted with my son, who is a senior in college and an applied math major. He tells me math is not anti-Semitic, explaining that he is Jewish, and he understands math. UNDERSTAND, that’s only because he is a genius! And not because he is my kid.   When he explains what he is doing in school, he understands, but to me, it sounds he is speaking Chinese. Heck, he even tried to explain to me what was correct or incorrect about the math the characters used in Avengers Endgame.

My son also explained to me that math couldn’t be anti-Semitic because one of the early geometry theorists was Rabbi Nehemiah, who lived in the second century CE. Nehemiah’s claim to fame was that he found a math mistake in the Bible.  The first book of Kings, chapter 7 verse 23 reads  “And he made the molten sea, ten cubits from brim to brim; it (was) round all about, and the height thereof (was) five cubits; and a line of thirty cubits did compass it round about.”

That cant be correct— ten cubits diameter and thirty circumference makes Pi 3.0 instead of 3.14… God was teaching us that not everyone has to be a genius like my son and that math is not racist. Who knows, based on what Rabbi Nehemiah found math mistakes may very well be Godly.

The Seattle math committee a deadline of September 1, 2020, to provide their final answer. I just wonder if 5+5 will still equal 10, at least for white people?

Oh, and a message to Y—she doesn’t want you anymore, so stop trying to find X.