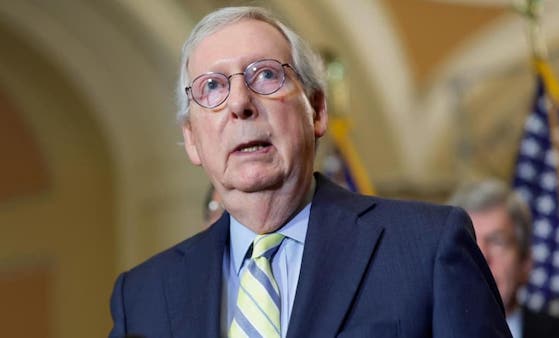 Minority leader Mitch McConnell dropped the gauntlet on Dem Senators in difficult election cycles … are you REALLY planning to do this to the jobs in your home states?

As much as government overspending has overheated the economy and wasted it in ways we may never comprehend, Biden still hasn’t got his massive tax-and-spend ‘build back better’ dream package off the ground.

He cares more about advancing his hoped-for budget changes than he does about the devastating impact those changes could have on the economy. Some of the holdout Democrats from last year seem to be warming to the idea.

Mitch McConnell took them to school, explaining precisely what this proposed plan would do to the workers in the states that sent them to DC in the first place.

First Democrats spent us into inflation. Now they want to tax you into recession. pic.twitter.com/WT5iBnipin

Democrats want to tax the hell out of pass-throughs.

They really haven’t thought this through — especially a few of these Democrats whose states have a majority of their workforce working for pass-throughs.

States like Georgia, Nevada, and Arizona (‘just to pick a few) have 58% of private sector workers employed by pass-throughs.

In New Hampshire, 61.7% are employed by pass-throughs.

In West Virginia, 95% of businesses are pass-throughs, accounting for about 58% of the employees.

Then he explained exactly what went wrong with the economy.

So, what are they looking at doing here? First, they overstimulated the economy by dropping almost 2 trillion dollars on the economy last year. At the time, Larry Summers and Jason Furman said this would create record inflation, and it did. And now they want to pour fuel on the flames by making it more likely that we go into a recession by raising taxes on all of these businesses in America, which will only cause them to reduce the number of employees.

So that’s where they’re trying to head, and I would continue to ask those who may be negotiating this if they fully understand the consequences of what they think they’re about to do.