CA School To Parents: Maskless Kids Will Be Ousted, Then Parents Prosecuted For ‘Truancy’ 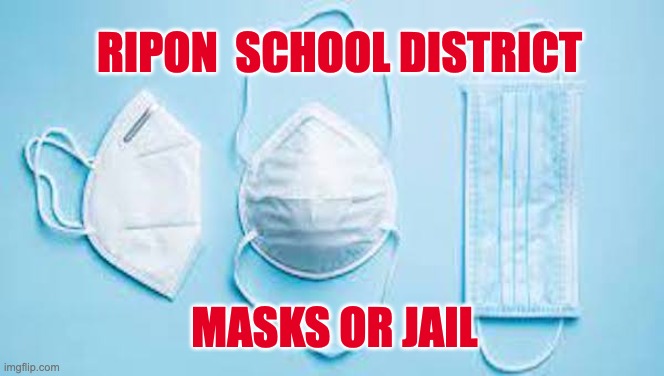 A California school district has warned parents that kids who are seen in school without a mask will be declared “dangerous,” thrown out of school, and then parents will be prosecuted for having truant kids. masks or jail

This is nothing but an out-of-control school inventing crimes, applying them to kids, then sentencing parents for these imaginary crimes.

A school district outside Stockton, California, in the state’s Central Valley, is proactively warning parents about what will happen if their children show up to school unmasked (possibly in support of the students in neighboring Oakdale). In a letter distributed Thursday, Ripon Unified School District told parents to “remove your students from campus unless they wear a face covering,” and that failure to do so “would force the District to consider taking other potential actions which the District would rather avoid, if possible, including”:

Mask-wearing to prevent viruses have no basis in science.

After the news leaked out, the district tied to tap dance its way out of this mess by claiming that the letter was not really school policy.

According to the Ripon Unified School District, the principal handed them a letter stating in part if masks aren’t worn, one potential action is “contacting Child Protective Services and request that they remove your children from campus as they have been abandoned on campus by you.”

When ABC10 asked if this could happen, the district told said, “the option is part of the general legal guidance that was prepared for several districts and does not reflect official district policy.”

Our miseducation institutions really need to be shut down or replaced en masse.