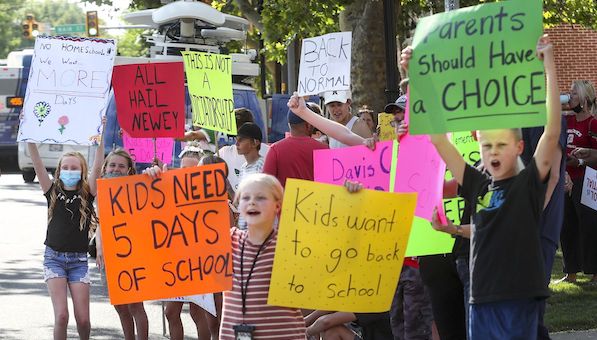 Has the President of the United States heard of a concept called “federalism?” Probably not. He doesn’t seem all that familiar with the idea of the “separation of powers” either. Let’s face it, like most Democrats,  Biden doesn’t seem to be a big believer in the U.S. Constitution.

On Thursday, Biden continued attacking red states who oppose mandating masks for schoolchildren while accusing the governors of politicizing the issue while he did just that.

He was asked if the federal government can override bans on mask mandates like Texas and Florida have put in place. He said that he “doesn’t believe” that he has Presidential powers to do so, but they’re “checking on that.” I wonder if it’s the same people who checked on the eviction moratorium.

It seems as if he is looking for a way to break the Tenth Amendment to the Constitution—the one that says, “The powers not delegated to the United States by the Constitution, nor prohibited by it to the states, are reserved to the states respectively, or to the people.” You know the same way he ignored the SCOTUS decision about not extending the eviction moratorium. But hey why should he listen to anyone, he got 81 million votes and doesn’t send mean tweets, right?

Behold the anti-federalist President who is giddy to override states’ rights:

So, if it’s “counterintuitive and, quite frankly, disingenuous” for the state to nullify a school board’s decision to impose masks on children — when what happens in schools is ultimately under the purview of the state — what the heck is it if the Feds step in and tell a state what to do?

By the way, did you notice that the reporter who is concerned about masks pulled his mask down so that he could be heard properly? Priceless.

As if this isn’t an issue with children who are sometimes difficult to understand.

We all know that masks muffle annunciation, which is frustrating to everyone. The reporter asking the question clearly knew that.

Now imagine you’re a child with a speech impediment who already has this issue. A Speech-Language pathologist has said that masks cause a lot of problems and frustration for those children.

Montclair Speech Therapy speech-language pathologist, Lori Colon-Caplan, said that “important, nonverbal cues have been removed from the arsenal” because of masks “making communication all the more difficult. She added that “many of the children who end up on our caseloads, present with sensory processing challenges which makes mask-wearing more than just something that is perceived as annoying but rather noxious.”

To be clear, Caplan is not anti-mask. She advocates for a “mask-wearing schedule” to improve the tolerance of mask-wearing for children who are sensitive to them. But she admits that masks do provide challenges to children with speech impediments.

The “soggy masks” aren’t just uncomfortable; they render the mask ineffective, make breathing difficult, and may allow mold, bacteria, and other pathogens to pass through and infect children.

A group of Florida parents sent their childrens’ masks to a lab and found bacteria, parasites, fungi, and dangerous pathogens on them, including those that can cause pneumonia, meningitis, and tuberculosis.

We’ve also seen that children are getting sick with other things due to the pandemic response, and those things can be deadly. In recent months, there has been a massive global spike in RSV, and hardly anyone is talking about it.

It’s also important to note that Biden is being incredibly disingenuous about the number of young children that are hospitalized and dying from SARS-CoV-2.

As of August 5, children 17 and under have accounted for 0.057% of all COVID deaths in the United States, and that doesn’t take into account any underlying conditions that those children may have had.

Biden’s “somebody please think of the children” is nothing more than another round of pandemic fearmongering by pulling on heartstrings.

His position isn’t about The Science™ at all — it’s about politics, optics, and fear.

Florida’s Republican Governor Ron DeSantis has said that the NIH hasn’t even bothered to study the effects of masking kids. He says removing government-imposed mandates gives parents a choice on whether or not to mask their children.

DeSantis then said that even Dr. Fauci admitted that he is “hopeful” that masks won’t have long-term effects on children but really has no idea.

DESANTIS ON MASKING FOR KIDS:

"NIH has a $42 billion budget. They've not spent a single penny since COVID started studying how these mitigations affect kids."

Medical experts worldwide have said that masking children — who are still at very low risk of serious illness or death from COVID, even The Delta Variant™ — isn’t necessary. Some have even called it child abuse.

If we’re supposed to “follow the science,” how about we look at what science says.

A recent study published in the Pediatric section of the Journal of the American Medical Association found that children wearing face coverings over the mouth and nose had an increase in carbon dioxide levels in both inhaled and exhaled air.

This is the paper evidencing why mask wearing in children is a bad idea. https://t.co/AvVDVrDiYM

The authors of that study cited a German study of nearly 26,000 which found that 68% of them had adverse reactions to wearing masks.

A report from Ireland said that forcing children to wear facemasks in the classroom not only has no real benefit in “slowing the spread” of the coronavirus, but it can actually cause harm to a child’s development.

The Health Information and Quality Authority’s report published in March informed Dublin’s decision not to mandate masks for children in elementary schools.

The HIQA paper noted that transmission of Covid was low in schools and that young children found it difficult to wear face coverings properly.

The scientists also gave evidence that masks had adverse psychological impacts, including causing anxiety and inhibiting the development of communication skills…

…The report found that since the pandemic started ‘the extent of transmission between children or onwards to households by children, has been low.’…

…Furthermore, the paper went on to add that ‘there is concern regarding the potential harms associated with face mask use, for example, anxiety or negative impacts on the development of communication and language skills, particularly for younger children.’
Source: Daily Mail

This is forcing children to take “precautions” to keep fearful adults safe. That’s not how this is supposed to work. Adults are supposed to take care of children, not vice versa.

The Biden-Harris administration wants children to protect paranoid adults who can no longer assess risk for themselves or children.