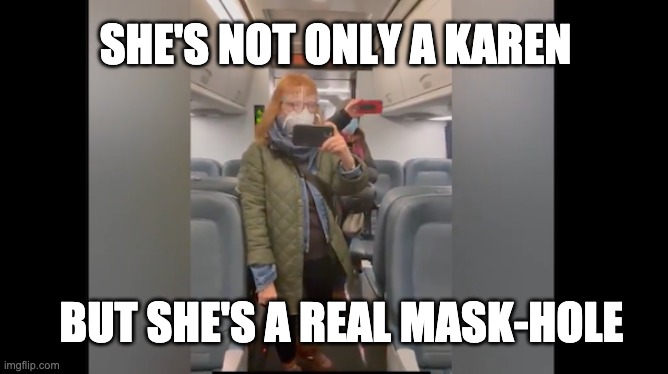 What an Assh–, I mean Mask-hole! It’s fine for this Huffington Post contributor to shame people on social media…just don’t you dare do it to her.

On Monday (which seems like an eternity ago,) a woman boarding a train at NYC’s Penn Station confronted two men who had removed their masks to drink their coffee. She whipped out her phone and started recording them and threatened to post the video on Twitter and share it with her “70,000 followers.”

Another woman was on the train and recorded the interaction. Ashley St. Clair is a producer and a conservative who defended the two men drinking their coffee and told the woman attempting to shame them that she was rude. She added that social distancing works better than a mask, so maybe she should just move on.

Mask-hole “Karen” was not amused and said to St. Clair, “Who are you? You’re not involved.”

That’s when the Conductor stepped in and said, “Do you want me to call the police? If you don’t want any police. Just go back to your seat. If not, I will call the police and let the police handle it.”

St. Clair posted the video and said that if someone is so scared of people taking off their masks to drink coffee…maybe just stay home.

People have lost their damn minds.

While Mask-hole “Karen” was bragging about her 70K Twitter followers, she didn’t realize that Ashley has over 400,000 and is followed by Jack Posobiec of OANN, who has 1.2 million.

Jack did a little digging, and he found out her identity. It turns out that she’s a contributor to the Huffington Post named Sandi Bachom.

It turns out the Crazy Train Lady in @stclairashley's video is a Huffington Post contributor. This is perfect. Absolutely perfect. pic.twitter.com/R4LJfHRIbn

Once she was identified, the mask-shaming HuffPo contributor made her Twitter account private, making her a cowardly mask-hole. 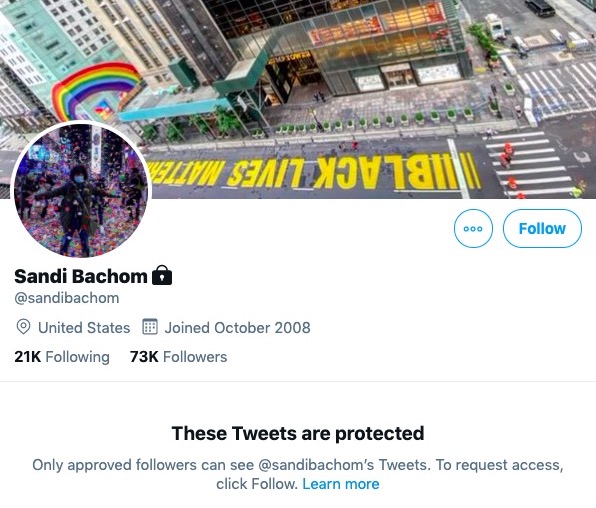 That’s got to be very upsetting to an attention hound like Sandi “My Tweets Are Now Protected” Bachom.

As St. Clair’s video and Jack’s tweet identifying Bachom rapidly spread far and wide in right-wing circles, the HuffPo contributor got some attention that she really didn’t want. She was being mocked for her stupid mask-shaming attempt.

So, she did what any HuffPo journo would do — she confronted Ashley St. Clair using her name and called her a Nazi, a lowlife, and a “doxxing bitch.”

These people are mentally deranged! pic.twitter.com/AA8xs1NlTZ

Now, I’m sure that the irony is lost on Bachom that although she’s very, very upset about being identified online for her awful behavior of recording and attempting to publicly shame two guys drinking coffee without masks on, she is the one doing the doxxing here by using St. Clair’s first name as she records the confrontation.

And let’s be real — Bachom knows that there are consequences to videos posted online. That’s why she threatened to mask-shame the coffee drinkers. She just doesn’t like the tactic being used on her.

But that’s exactly what needs to happen. We cannot have two sets of rules in society — one for the left and one for the right. So, let’s make the left live by the rules that they have set and made acceptable. That’s what Ashley St. Clair did with her videos.

She’s right to do it.

Maybe then we can stop all of this cancel culture B.S.

I, for one, refuse to unilaterally disarm.