by Warner Todd Huston And Jeff Dunetz | May 24, 2022 | Constitution, Politics 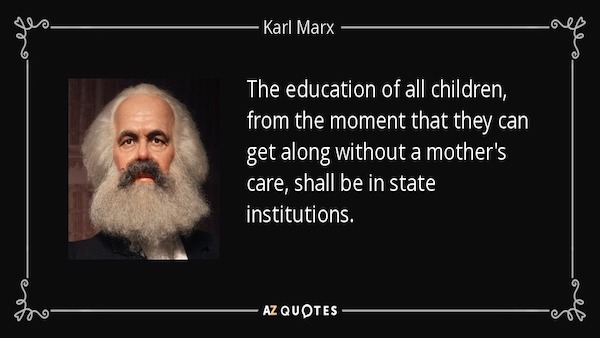 It turns out that an American school board association that called parents “terrorists” for attending school board meetings also wanted the federal government to send troops of U.S. Army soldiers to act as “security” to intimidate parents attending those meetings. Like Karl Marx, they seem to believe that children belong to the state.

Maybe that’s why Biden pulled out the troops from Afghanistan in such a reckless way. He wanted to free up troops to remove American parents’ freedom of speech.

“We ask that the Army National Guard and its Military Police be deployed to certain school districts and related events where students and school personnel have been subjected to acts and threats of violence,” the NSBA stated in a draft letter.

NSBA letter draft: "We ask that the Army National Guard and its Military Police be deployed to certain school districts and related events where students and school personnel have been subjected to acts and threats of violence."

You’ll recall that the NSBA was the group that colluded with the Biden administration and the corrupt FBI to begin investigating parents who were upset over schools pushing racist, Critical Race Theory policies that taught that White children are always oppressors and Black children are always victims.

At the group’s urging, the FBI labeled these parents as domestic terrorists just for being concerned about what their kids were exposed to in school. Of course,  most parents believe they have a right to know and shape what’s going on in their children’s education.

What the NSBA attempted to accomplish was pushed by Karl Marx:

Marx said that communism would ensure that children would be educated by the state and not by their parents. Communists, he wrote in the Manifesto, would “rescue education from the influence of the ruling class.” The making of the “New Man” was the priority, and the family was an obstacle.\

This is another example of how socialists have taken over the Democratic Party.

The way it should work is that parents are the primary educators of their children. But the Biden administration and the NSBA want to call in the troops to ensure the Marx vision of parenting.