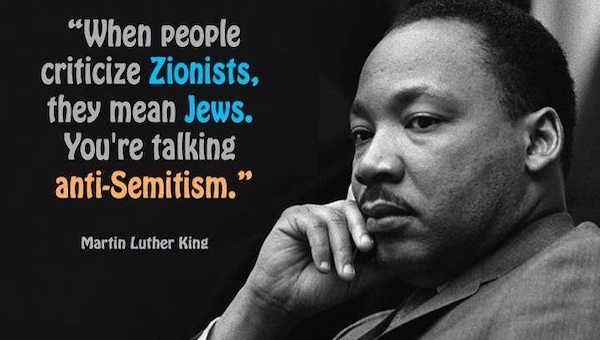 More exact words were never said. They were told by the great civil rights leader, The Reverend Martin Luther King Jr., the American hero whose life and dream America celebrates on Monday, January 17.

Dr. King was a great leader for civil rights, and as part of that leadership, he was a Zionist who loved the Jewish people. Unlike some self-styled civil rights leaders today who seek divisiveness, Dr. King’s dream was a post-racial society where people were judged by the content of their character instead of the color of their skin.

In recognition of MLK Day, some will reference a letter supposedly penned by Dr. King called “Letter to a Zionist Friend.” The most famous line in the letter, “When people criticize Zionists, they mean Jews. You are talking Antisemitism,” was uttered by Dr. King and reflected his beliefs but wasn’t written in any letter.

“I was his lawyer and one of his closest advisers, and I can say with absolute certainty that Martin abhorred anti-Semitism in all its forms, including anti-Zionism. “There isn’t anyone in this country more likely to understand our struggle than Jews,” Martin told me. “Whatever progress we’ve made so far as a people, their support has been essential.”

Twenty years ago, CAMERA (Committee For Accuracy In Middle East Reporting And Analysis) tried to verify the letter but couldn’t find a source document anywhere. They even tried Boston University, where Dr. King’s work is archived. The archivists, too, were unable to locate any such letter. “We can only conclude that no such letter was written by Dr. King.”

The late Rep. John Lewis, who worked closely with Martin Luther King Jr., wrote an op-ed called “I Have A Dream” For Peace In The Middle East / King’s Special Bond With Israel” confirmed that Dt. King was a firm believer in Zionism, and that the famous quote was spoken, not written:

“During the recent U.N. Conference on Racism held in Durban, South Africa, we were all shocked by the attacks on Jews, Israel, and Zionism. The United States of America stood up against these vicious attacks.

That’s the origin of his famous statement.

Part of the civil rights the Reverend Dr. Martin Luther King Jr.that we celebrate on January 17, was his moral belief in a homeland for the Jews on the land they’ve lived on for approximately four thousand years. He understood that the holy land has been the Jewish homeland ever since God told Abraham, “Go forth from the land and from your birthplace and from your father’s house, to the land that I will show you.’ That land is now known as Israel.

On March 26, 1968, just nine days before he was murdered by an assassin, Reverend King gave an address to the 68th annual convention of the Rabbinical Assembly. His words included:

“Peace for Israel means security, and we must stand with all of our might to protect its right to exist, its territorial integrity, and the right to use whatever sea lanes it needs. I see Israel, and never mind saying it, as one of the great outposts of democracy in the world, and a marvelous example of what can be done, how desert land can be transformed into an oasis of brotherhood and democracy. Peace for Israel means security and that security must be a reality.”

As Reverend King supported Zionism, some of the great Zionist leaders fought for the civil rights of Black Americans. Ze’ev Jabotinsky, for example:

Jabotinsky also had more than a passing interest in the question of race relations in the U.S.Following a wave of race riots that erupted in the U.S. after black boxer Jack Johnson defeated his white opponent, Jack Jeffries, in 1910, Jabotinsky wrote (in the Russian periodical Odesskie Novosti): “In the United States, the most free republic on earth, there are ten million citizens suffering a shocking lack of rights simply because of the color of their skin … Theaters are closed to the black man, as are hotels, railway cars, and schools. He is assigned special railway cars and narrow, separate compartments on trains. Schools for black children are cheaply constructed, inadequate, and dirty. The political rights of the ‘free and equal’ black citizen are non-existent.”

Sadly, too many people ignore Dr. King’s love for the Jewish people and their homeland, Israel, in today’s world.

In the end, doesn’t matter whether the sentence “When People Criticize Zionists They Mean Jews, You Are Talking Antisemitism” was written in a letter or spoken at Harvard. He supported the Jewish people having the right to a nation in their eternal homeland, which is the meaning of Zionism. He believed that the anti-Zionist canards, which are still being spewed over fifty years later,  are simply a more acceptable way of expressing hatred for the Jewish people.

When saying prayers on Monday, I will add something like:

Lord who grants salvation to kings and dominion to rulers, Whose kingdom spans all eternities; Who places a road in the sea and a path in the mighty waters – may you bless the soul of Dr. Martin Luther King Jr. And may his memory always be for a blessing,

This post was initially written for Herut. Jeff Dunetz (The Lid) is on the national board of Herut, an international movement for Zionist pride and education dedicated to the ideals of the late Zionist leader Ze’ev Jabotinsky. More about Herut can be found at www.HerutNA.org–Please consider clicking here and join me as a member of Herut.