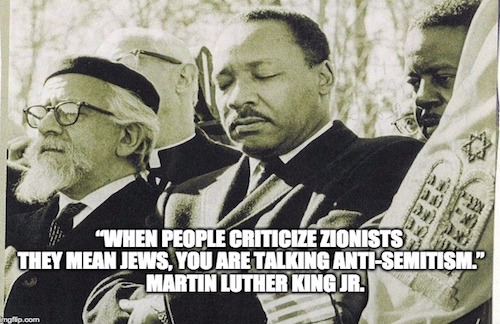 “When People Criticize Zionists They Mean Jews, You Are Talking Anti-Semitism,”

Truer words were never said, and they were said by the great civil rights leader, Martin Luther King Jr. However they weren’t said in a letter as long believed.

Martin Luther King Jr. whose life and dream we celebrate today was a great leader for civil rights. Unlike today’s “Civil Rights” leaders who seek divisiveness and handouts, Dr. King dream was a post racial society where people where judged by the content of their character instead of the color of their skin.

Also unlike most “Civil Rights” leaders today Dr. King was a supporter of Israel and the Jewish people.  In recognition of MLK day many Jewish will post a letter supposedly penned by Martin Luther King called “Letter to a Zionist Friend,” but the story of the letter is a hoax.

The most famous  line from the letter “When people criticize Zionists, they mean Jews. You are talking anti-Semitism,” was uttered by Dr King, just not in any letter. Over the next day or two you will read  various posts containing the letter— most of the text does not contain the words of the great Civil Rights Leader. The good news however, is it does contain his sentiments.

However, we then found the “letter” in a reputable 1999 book (“Shared Dreams,” by Rabbi Marc Shneier) whose preface was written by Martin Luther King III. Since the King family is known to be extremely careful with Dr. King’s legacy, we assumed they must have verified the accuracy of the book before endorsing it.

Additionally, we found that quotations from the “letter” were used on July 31, 2001, by the Anti-Defamation League’s Michael Salberg in testimony before the U.S. House of Representative’s International Relations Committee’s Subcommittee on International Operations and Human Rights. The same “source” (Saturday Review, August 1967) for the “letter” that was mentioned in the Schneier book was also cited in the testimony. Since many in the Anti-Defamation League had actually worked with Martin Luther King, Jr in the civil rights struggle, we assumed again they would be very knowledgeable about King’s work and would have thoroughly checked anything they chose to read before Congress.

However, because we do not ordinarily rely on anyone else’s research, we decided to double-check, by searching back issues of Saturday Review (Rabbi Shneier’s book had referenced the “letter” as being published in the August 1967 Saturday Review). Lo and behold, there is no such letter in any of the August issues, nor do the page and volume numbers cited conform to those actually used by that publication. CAMERA also checked with Boston University, where Dr. King’s work is archived. The archivists too were unable to locate any such letter. We can only conclude that no such letter was written by Dr. King.

(Please note we are not implying that the apparently bogus “letter” originated with Rabbi Schneier.)

However in the same year (2002) Rep John Lewis who worked with Dr. King (but in recent years has become something of a racer-er) wrote an op-ed confirming that the famous quote used in the fake letter came from a speech made by Dr. King,

During an appearance at Harvard University shortly before his death, a student stood up and asked King to address himself to the issue of Zionism. The question was clearly hostile. King responded, “When people criticize Zionists they mean Jews, you are talking anti-Semitism.”

As it turns out Rep. Lewis was wrong also. King uttered those words at a dinner which took place at the Cambridge home of Martin Peretz, then a professor at Harvard. As reported by Martin Kramer:

Shortly before he was assassinated, Martin Luther King, Jr. was in Boston on a fund-raising mission, and I had the good fortune to attend a dinner which was given for him in Cambridge. This was an experience which was at once fascinating and moving: one witnessed Dr. King in action in a way one never got to see in public. He wanted to find what the Negro students at Harvard and other parts of the Boston area were thinking about various issues, and he very subtly cross-examined them for well over an hour and a half. He asked questions, and said very little himself. One of the young men present happened to make some remark against the Zionists. Dr. King snapped at him and said, “Don’t talk like that!  When people criticize Zionists, they mean Jews. You’re talking anti-Semitism!”

The Reverend Dr. Martin Luther King Jr. was a great man who believed that everyone should be able to live in peace and freedom, no matter how they worshiped God, or the pigment of their skin. He was a fighter for civil rights, and he was a fighter for the Jews.

Dr. King fought for the release of Jews in the Soviet Union.  He was an early supporter of Israel, who knew how to cut through the phony anti-Zionist memes of many anti-Semites. Many civil rights leaders, heck many political leaders today would serve themselves well to better understand the words of this man of peace.