"That kind of attitude on Israel’s part is not ingratitude; it’s disrespect. It’s something that I find very, very disturbing.” 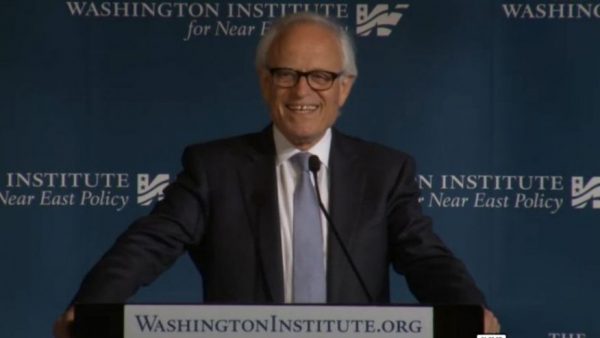 Former Middle East negotiator and VP for the Qatari-funded Brookings Institute Martin Indyk took the opportunity to trash Israel during a frank off-the-record talk at a Washington, D.C., synagogue during the recent Yom Kippur holiday.

A tape of Indyk’s remarks was given to the Washington Free Beacon which reported what transpired:

The U.S.-Israel relationship is critical, is essential to Israel’s survival,” Indyk told the audience. “And the relationship is in trouble.” U.S. support for the Jewish state is “the bedrock that Israel has always relied on … and I worry that bedrock is crumbling,” Indyk said, laying partial blame at the feet of Democrats.

“We have a situation,” he said. “Support amongst Republicans for Israel is really high. … But the truth is that most Jews are Democrats, and amongst Democrats support for Israel is only something like 43 percent.”

“That’s a huge gap, which is indicative of the fact that it has become a partisan issue,” Indyk added.

However, the longtime negotiator reserved his harshest criticism for the Israelis.

“On the Israeli side I see something which I’m really, really disturbed by, which is the total disrespect on the part of some on the right in Israel for the relationship with the United States,” Indyk said. “And that manifests itself with right wing politicians standing up excoriating our leaders, who are trying to do their best for Israel,” Indyk said.

“Look to the [Israeli] Defense Minister, whose budget is supplemented to the tune of $3 billion dollars a year by the American taxpayer, standing up and calling the Secretary of State an obsessive messianic,” Indyk said. “That kind of attitude on Israel’s part is not ingratitude; it’s disrespect. It’s something that I find very, very disturbing.”

Indyk did not mention the perceived disrespectful comments and actions which may have incited the Defense Minister’s “inappropriate” statement.

A long-time critic of Israel, Indyk also took the opportunity to trash President Obama for fueling perceptions that the United States is withdrawing from the region, a view that he said is the result of both the Bush administration’s intervention in Iraq and Obama’s withdrawal from Iraq and Afghanistan.

Indyk, who is Jewish, made his comments in a synagogue on Yom Kippur, a holiday where Jews ask God to forgive their sins. One consistent theme is asking atonement for speaking ill of others.