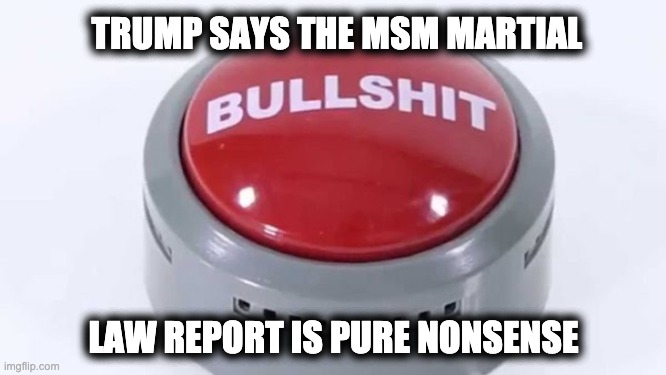 President Trump would do anything for a second term in the White House, but he won’t do that.

However, the Commander in Chief wholeheartedly denied that the conversation ever took place.

President Donald Trump denied Sunday he was considering martial law after news outlets speculated about the contents of a White House meeting that they weren’t in.

The New York Times reported Trump met with Sidney Powell and his former National Security advisor Gen. Michael Flynn on Friday evening to explore further options of challenging the 2020 presidential election, even though the electoral college has already met to elect Biden.

Cable news outlets seized on the Times report that the president discussed imposing martial law and deploying the military to rerun the election, a proposal that Flynn discussed on Newsmax.

Flynn’s suggestion was embraced by the mainstream media and turned into a big story. Thus the NY Times falsehood about the Oval Office meeting.  But the real truth about the martial law story, if Trump’s legal battles don’t work, the mainstream media wants to send President Trump away, the same way they welcomed him to the White House with rumors and unsubstantiated reports designed to make Trump look bad.

Donald Trump loves this country and is a big believer in freedom and the constitution. He is using and will continue to use every legal method to stay in office.  He knows that a declaration of martial law will divide the country and that the military will not follow such an order. He will not suspend the constitution no matter what the mainstream media say.