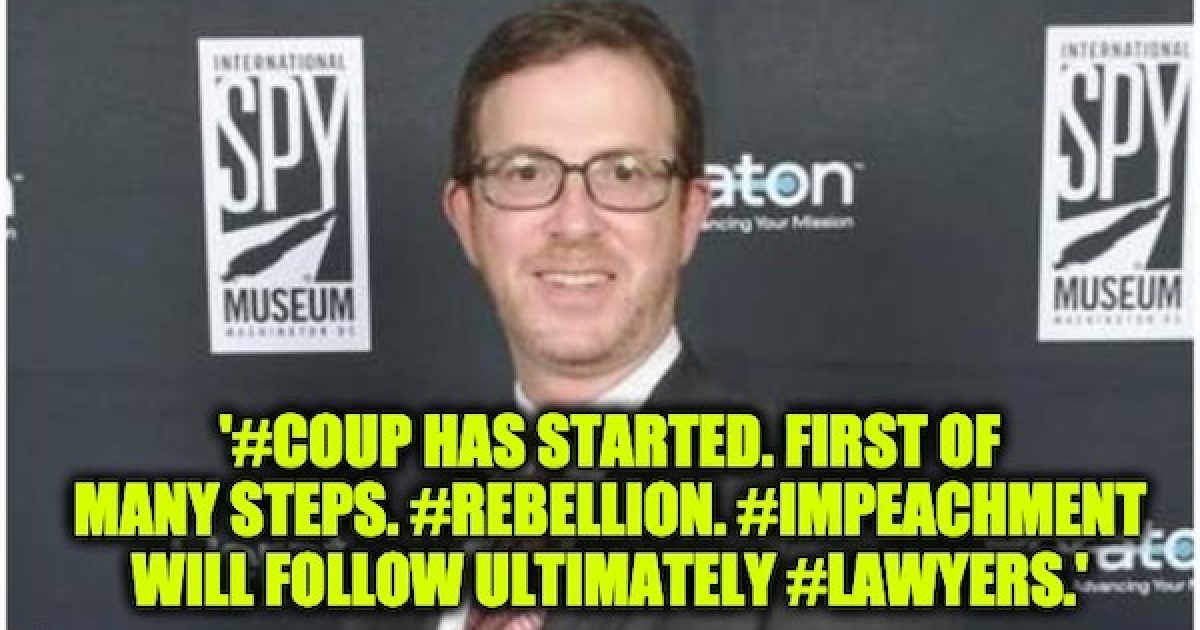 On Wednesday, reports broke that Mark Zaid, the attorney for the alleged “whistleblower” called for a coup d’etat and a rebellion against President Trump in a tweet issued ten days after he was inaugurated in January 2017.

It was a response to the report about Sally Yates being fired for insubordination. “#coup has started.” He wrote, “First of many steps. #rebellion. #impeachment will follow ultimately. #lawyers.”

He issued a number of other anti-Trump tweets during the year:

I vote we get rid of him. Anyone else with me!

He also went after Trump’s supporters:

It's very scary. We will get rid of him, and this country is strong enough to survive even him and his supporters. We have to.

#MAGA – get rid of @realDonaldTrump

“The whistleblower’s lawyer gave away the game,” the Trump campaign’s communications director, Tim Murtaugh told Fox News. “It was always the Democrats’ plan to stage a coup and impeach President Trump and all they ever needed was the right scheme. They whiffed on Mueller so now they’ve settled on the perfectly fine Ukraine phone call. This proves this was orchestrated from the beginning.”

“We should take [Zaid] at his word that this is a coordinated, premeditated plot to overturn the election,” House GOP leader Kevin McCarthy added.

And 45 years from now we might be recalling stories regarding the impeachment of @realDonaldTrump. I'll be old, but will be worth the wait https://t.co/x6rvUIJJdL

Actually, in 45 years we will remember how the Democratic Party divided the nation with their attempts to overturn the 2016 election and kick a duly elected president out of office. And hopefully, in 45 years those who started the process will be just be getting out of jail.

Unless someone discovers that Zaid did more than a tweet, there is nothing illegal about those tweets. However, as Schiff’s staff sent the whistleblower to Zaid, it’s just another indication that the entire process is a house cards, a hoax designed to cancel the votes of millions of Americans.

President Trump responded to the tweets during a rally held Wednesday, Breitbart reported:

Trump called Zaid a “sleazeball” and read another post on Twitter from the lawyer predicting that “CNN will play a key role in Donald Trump not finishing out his first term.”

“It’s all a hoax, it’s a scam, and you know who helps them, these people, the media,” Trump said, pointing to the back of the hall, as the crowd booed.

Zaid’s repeated calls for the president to get impeached demonstrate his partisan agenda, even prior to the complaint from the so-called “whistleblower”

Trump cited a third tweet, noting that “as one falls, two more will take their place,” likely referring to Trump administration employees who defied the White House and that the “coup” would occur in “many steps.”