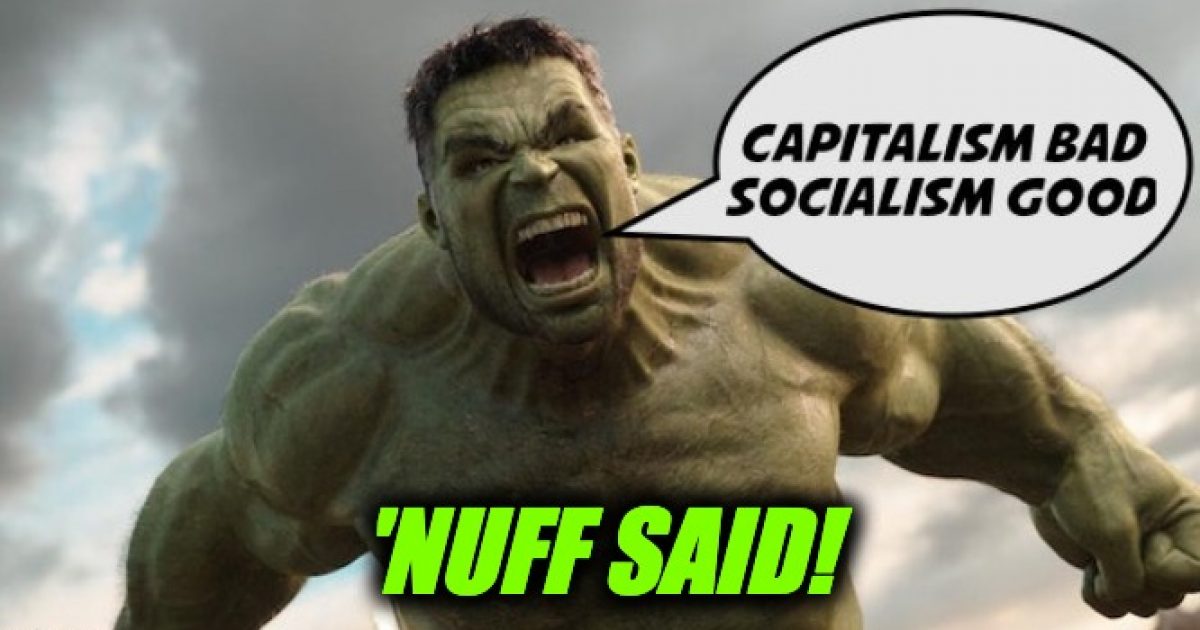 Mark Ruffalo is going all out to prove he is more like the Hulk, a character who acts on impulse without rational thought, than the “professor Hulk” the brilliant character he played in Avengers Endgame. The actor whose net worth is approximately $30 million thanks to the US capitalist economy, says “capitalism is failing us” and is supporting socialism. The Hulk actor doesn’t understand that socialism is antithetical to the Judeo-Christian tradition, and the freedoms that helped to make America great. Mark Ruffalo Socialism

It’s time for an economic revolution. Capitalism today is failing us, killing us, and robbing from our children’s future. https://t.co/OnNm6CYrWK

In October he declared his support for socialism

Democratic Socialism says it's a moral wrong that 57% of income is going to the top 1%. Universal health care. Medical & family paid leave.

Mark Ruffalo should read something other than movie scripts and/or Bernie Sanders campaign literature because he doesn’t seem to understand that he is espousing an economic system responsible for killing over 100 million people since the beginning of the 20th century and has destroyed economies.

The chief reason the socialist system fails is that there are no incentives to work hard to better one’s self.  The government-run economy might seem reasonable to some, but what it is really doing is averaging everything, salaries, benefits, products, etc.

One of the reasons Obamacare is a failed system is that it eliminated the low-level health insurance plans that young people wanted and placed a “Cadillac” tax on the highest level plans. Typical of socialist programs, it pushes everything pushed into a mediocre middle. That’s what kills incentive. Whether you do well or lousy at your job, the outcome is the same, so why bother. In Ruffalo’s case, he will make the same an actor with a bit role, either via salary or over-taxation of higher incomes. Something like Elizabeth Warrens’s tax plan, which will lead to some people paying over 100% of their income in taxes.    The lack of incentive eventually leads to a poorly performing economy.

Under a socialist system, an inefficient, bloated bureaucracy makes economic decisions the consumers have no choice and are often forced into breadlines for inferior bread, or even running out of toilet paper.

Karl Marx famously said, “Religion is the opium of the people.”  Following Marx’s lead, Socialism tries to replace God with a socialist Government, destroying principals inherent to both the Judeo-Christian and American traditions such as limited government, individual responsibility, and traditional morals.

One of the unique things about the American tradition is that our rights come from God, the government cannot take them away. As Jefferson wrote in the Declaration of Independence:

Along with explaining where our rights came from, what Jefferson meant by all men are created equal is that all have the same opportunity to be as good as we can be with the cards with which we’ve been dealt.

On the other hand, Socialism teaches that everyone should have an equal averaged mediocre “result.” So if he gets his way, Ruffalo will have to downsize his home to the average national domicile. Unless, of course, he is part of the elite. In socialism, the only people who do well are part of the government or one of their favored party members.

In Socialism, everybody gets the same reward no matter what they get done, which is also against our Judeo Christian values. Have you ever noticed that in the Genesis creation story,  after five of the seven days, God “saw that it was good”? The two exceptions are Mondays and Tuesdays. Monday (day #2) doesn’t get an “it was good,” Tuesdays gets called good twice.  On first thought, one might think that God hates Mondays. But that doesn’t seem right. Besides, it doesn’t explain why Tuesday gets to double-dip. The reason for the difference we are being taught that we get rewarded based on what we accomplish.

According to the text, only part of the job of creating oceans gets accomplished on Monday.  Genesis 1:6 says water is separated on Monday, “Let there be an expanse in the midst of the water, and let it be a separation between water and water.” But the next day God does something with the water, “Let the water that is beneath the heavens gather into one place, and let the dry land appear,” and it was so, And God called the dry land earth, and the gathering waters He called seas.” Gen. 1:9-10.

You see, on Tuesday, God finished the water job.  Therefore Tuesday got rewarded, and Monday got bupkis because it only did half the job.  Going against socialism which teaches that everyone gets what they need, not what they earned. Or, as Marx famously said, From each according to his ability, to each according to his needs.”

In the long run, socialism has always led to tyranny and misery because the government needs to force its policies and take away people’s freedoms to make the economy work

That Mr. Ruffalo is why Socialism is a green Hulk-like dysfunctional, violence-prone ideology.