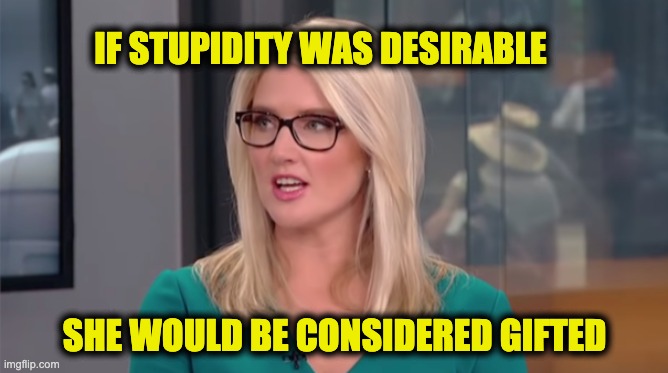 In the movie Duck Soup, Groucho Marx may have been thinking about Marie Harf when he described someone with, “[She]  may look like an idiot and talk like an idiot, but don’t let that fool you. [She] really is an idiot.” When Harf was a State Department spox during the Obama administration, her afternoon briefings were like comic relief. It seems Fox News colleagues may be losing patience with Harf.

During her tenure at Foggy Bottom, there was the time she tried to convince America that the way to win a war is to give the enemy’s youth jobs. A guest on MSNBC’s Hardball, then State Department Spokesman Marie Harf contended that the only way to solve the problem of ISIS is to create jobs and “opportunity for young people.” Harf contended that the United States cannot win the war against ISIS through warfare and killing the enemy.

“We can not win this war by killing them; we cannot kill our way out of this war. We need in the medium and longer term to go after the root causes that leads people to join these groups.

Of course, when Obama was replaced by President Trump, we realized that a president who actually wanted the military to wipe out ISIS   will wipe out ISIS–no jobs necessary.

At Fox News, it seems that anchor Harris Faulkner is growing tired of Harf’s asinine declarations.  She scolded Marie Harf after the liberal pundit took a shot at the talk show Outnumbered for not hyping COVID death numbers to what she views as an acceptable level.

Harf began by running defense for Democrats engaged in stifling, Draconian, and unconstitutional lockdown orders as a means to combating the pandemic. Justifying those edicts, in her view, is the death toll from the virus.

“Yeah, I mean, we are 43 minutes into the show and we haven’t mentioned the 3,000 Americans that died yesterday, more than on 9/11 and every day for a while we are going to have that many American deaths,” the Democratic village idiot said.

Faulkner did not respond kindly to the notion that her show is not sympathetic enough in its coverage of the pandemic.

“Can I just quickly say because I feel like, Marie, you took a shot there, and maybe you felt like it was necessary but if you don’t think that our hearts are big enough to mourn the people we have lost during this pandemic, what exactly are you trying to say?” Faulkner shot back. “That is offensive and it is not true. It is not true!”

The Fox host urged Harf to “keep your judgment someplace where you know you can fact-check it because you can’t see my heart.”

Two things here: One, the only reason Harf is enamored with the death rate of COVID is that in her mind, it reflects poorly on President Trump. She can use it as a political talking point.

How do we know that? Well, number two, deaths aren’t quite the be all end all Harf would have you believe. If it were, she’d want the show to discuss the number of abortions on a daily basis. And we’re quite certain the liberal pundit isn’t objecting to that any time soon.

Fox News' Harris Faulkner blows up at Marie Harf for noting that they went nearly the whole show without mentioning the record-setting covid death toll.

"That is offensive and it is not true… you can’t see my heart and trust me when I tell you it hurts all of us!" pic.twitter.com/hSS4YjEQwN

Harris Faulkner and Marie Harf have a bit of history, with the former usually getting the better of their exchanges.

In a dustup last month, Harf attempted to shame President Trump for not taking questions from the media.

“Why is Donald Trump not taking questions?” she asked without a hint of self-awareness. “He’s the one hiding in the basement now. He hasn’t taken reporter questions since the week of the election. Why isn’t he answering anyone’s questions?”

Faulkner, whose network couldn’t get President-elect Joe Biden to accept reasonable interview requests even with friendly hosts, and whose network was consistently shunned by the Obama administration, essentially told Harf to sit down and shut up.

“Our news team contacted Joe Biden’s office on a daily basis for the last couple of years!” Faulkner shot back. “Please take a seat — take several seats — on that!”

Faulkner has remained a bright spot for Fox, which has been under siege from conservatives for their election coverage and reporting on fraud complaints by the President and his supporters.

She did have a bit of a hiccup back in September, drawing fire after her show cut off Newt Gingrich while trying to address the left-wing billionaire George Soros.

This is one of the weirdest exchanges I’ve ever seen on TV. @newtgingrich correctly points out that George Soros threw an unprecedented amount of money into DA races all over the country to elect radicals and Fox News basically told him to shut up. WTF? pic.twitter.com/IxwcLG2gOH

Faulkner later offered an apology of sorts along with an explanation.

“Do we debate with fire here? Yes! But we must also give each other the space to express ourselves,” Faulkner stated. “We don’t censor on this show.”

In the case of Marie Harf, it’s not an example of giving time to both sides. Her lack of intelligence makes conservatives look good. Harf is, however, an example of what author Dean Koontz meant when he said, “Human beings can always be relied upon to assert, with vigor, their God-given right to be stupid.”