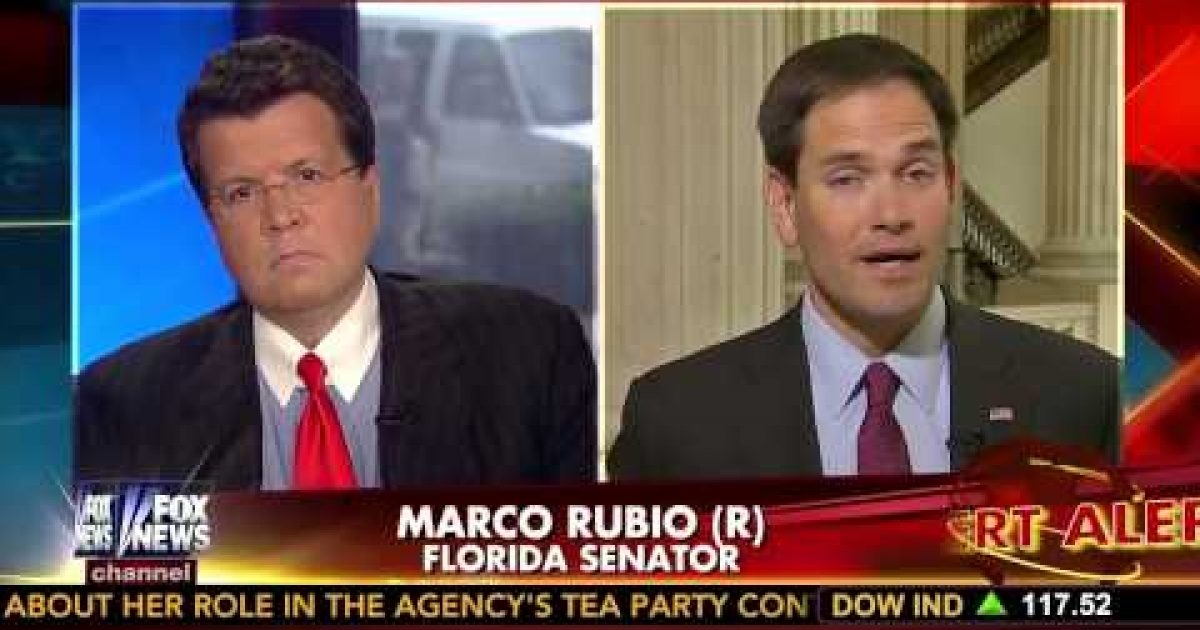 Marco Rubio was a guest on Wednesday’s Neil Cavuto program on Fox News and was asked to comment on a claim made by former Florida governor Charlie Crist that he left the GOP because it was racist (as opposed to because he lost the GOP Senate primary to Rubio). Rubio said Crist’s claim was “ridiculous and silly” and agreed with Cavuto that the former Governor was a phony.

Crist, who is running for the governor’s office again, this time as a Democrat, blasted his old party Tuesday during an interview with Fusion’s Jorge Ramos, saying he left the GOP because party had a “racially-motivated bias against President Barack Obama.”

After playing a clip of the Crist/Ramos interview, Cavuto asked Senator Rubio what he thought of the former governor’s charge of racism:

Rubio: I think it’s ridiculous and silly. Two points I would make. First of all, I’m even cautious to even dignify that with a serious response. My prediction is by the end of this election, even Democrats will be embarrassed that Charlie Crist became a Democrat. If this was in fact how he felt at the time, why didn’t he say it? Why didn’t he say I’m not running as a Republican because I think the Republican party has become what he accuses it of becoming and why didn’t he switch to Democrat? Why did he run as an Independent? Why didn’t he do that at the time? Why did it take him four years to say what he’s saying? It’s just not a serious thing. That’s my second point. I’ve never met a single Republican activist involved in my campaign that has ever, in my opinion, ever been motivated by race to state their objections. I think it’s absurd and quite frankly it’s barely worthy of any sort of response. But because he’s running for Governor of my state, I guess I need to say what I said.

Cavuto: Do you think he’s a phony?

Rubio: Absolutely. I believed that during the campaign. That’s one of the reasons why I ran for the U.S. Senate. I didn’t want my next U.S. senator to be someone like that, who wouldn’t just be trustworthy in moments of importance for the country, but who would embarrass us by saying these sorts of ridiculous things.

Cavuto: If he’s a phony, he leads in the polls. It’s still early.

Rubio: He led in the polls against me too.

Rubio:I think once people start to focus in and they realize it’s the same Charlie Crist that’s running, that he is the same guy that’s been basically on every side of every single issue before the country and the state, I think those numbers will change dramatically.

Rubio is correct, Crist had no issue with the party at the beginning of his Senate primary race when he had a huge lead over Marco Rubio.  But when it became apparent that Rubio would beat him on primary day Crist announced he would run against Rubio and Democrat Kendrick Meek as an independent which drove party leadership to disassociate themselves from the Governor.  Even then when he left the GOP he didn’t become a Democrat, and he didn’t blast the party for racism.
Crist’s interview just reaffirms him as nothing but a political tramp who would do anything just to get elected.
Facebook Twitter Flipboard