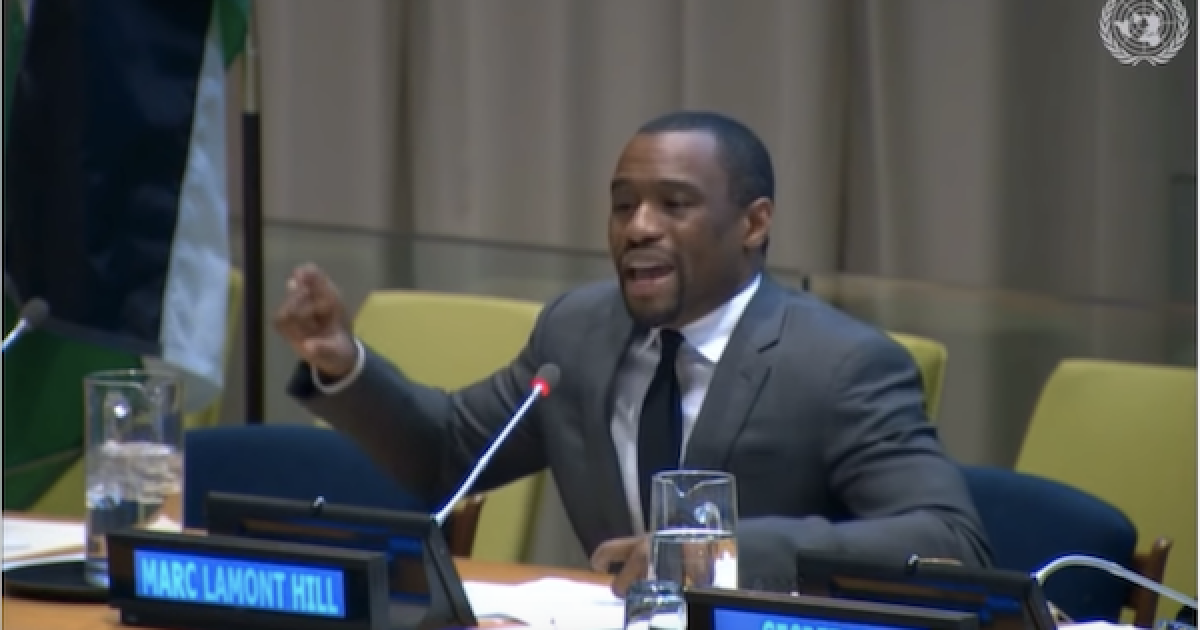 CNN commentator Marc Lamont Hill lost his job last week when he used a Palestinian phrase calling for the destruction of Israel.  There’s no question that Marc Lamont Hill’s statement was anti-Semitic, I do disagree with CNN’s punishment, canceling his contract,

Hill spoke Wednesday at the United Nations at a meeting of the Committee on the Exercise of the Inalienable Rights of the Palestinian People on the occasion of the so-called ‘International Day of Solidarity with the Palestinian People,’ which is what the UN calls the anniversary of the 1947 General Assembly vote approving the partition plan which was accepted by the Palestinian Jews but not the Arabs,

His speech passively-aggressively called for the international community to boycott Israel and allow Palestinians more space to engage in violence against the Jewish state. He claimed that violence was also employed in the struggles of African Americans.

Solidarity from the international community demands that we embrace Boycotts, Divestment, and Sanctions as a critical means by which to hold Israel accountable for its treatment of Palestinian people. This movement – which emerges out of the overwhelming majority of Palestinian civil society – offers a nonviolent means by which to demand a return to pre-67 borders, full rights for Palestinian citizens, and the right to return by international law.

“Contrary to western mythology, black resistance to American apartheid did not come purely through Gandhi and nonviolence, Rather, slave revolts and self-defense and tactics otherwise divergent from Dr. King or Mahatma Gandhi were equally important to preserving safety and attaining freedom. If we are to operate in true solidarity with the Palestinian people, we must allow the Palestinian people the same range of opportunity and political possibility. If we are standing in solidarity with the Palestinian people, we must recognize the right of an occupied people to defend itself. We must prioritize peace, but we must not romanticize or fetishize it. We must advocate and promote nonviolence at every opportunity, but we cannot endorse a narrow politics of respectability that shames Palestinians for resisting, for refusing to do nothing in the face of state violence and ethnic cleansing.”

Marc Lamont Hill ended his speech with, “Give us a free Palestine from the river to the sea,” a stock slogan of the PLO,  Fatah, Hamas and other terrorist organizations dedicated to the destruction of the Jewish State. It’s a call for the takeover of the entire Land of Israel.

It was that last line that got him into trouble.

According to the US State Department, one example of Antisemitism is “Denying the Jewish people their right to self-determination.” In other words, any statement which says there shouldn’t be a Jewish State of Israel.

By calling for a Palestinian State from “river to the sea” and allowing Palestinian violence, Marc Lamont Hill was calling for the violent anti-Semitic goal of the Palestinian terrorists, the destruction of the Jewish state of Israel.  It’s a call for a one-state solution and that state is not the Jewish Homeland,

It wasn’t the first time Hill disputed Israel’s right to exist. In May 2018 he wrote in the Huffington Post, “By naturalizing the idea that nation-states have a ‘right to exist,’ we undermine our ability to offer a moral critique of Israel’s (or any settler-colony’s) origin story,” which not only denied Israel’s right to exist but denied the fact that the Jewish people have lived on that land for thousands of years.

The morning after his UN speech, Marc Lamont Hill scrambled to fight the charges of anti-Semitism. He tweeted his defense:

I do not support anti-Semitism, killing Jewish people, or any of the other things attributed to my speech. I have spent my life fighting these things.

My reference to “river to the sea” was not a call to destroy anything or anyone. It was a call for justice, both in Israel and in the West Bank/Gaza. The speech very clearly and specifically said those things. No amount of debate will change what I actually said or what I meant.

This isn’t a case of throwing rocks and hiding hands. I genuinely believe in the arguments and principles that I shared in the speech. I also genuinely want peace, freedom, and security for everyone. These are not competing ideals and values.

It was too little, too late, a little after Hill’s third tweet above CNN announced: “Marc Lamont Hill is no longer under contract with CNN.” With that move, CNN turned Marc Lamont Hill from an anti-Semite to a martyr for the Palestinian cause.

“I think it’s a disgrace,” James Zogby, pollster, and president of the Arab American Institute told The Daily Beast. “It’s just evidence of what we have known for decades—the lack of tolerance for any deviations from what is accepted as the position on Israel and Palestine.”

Gideon Levy of the leftist Israel paper Ha’aretz said: “In the heavy-handed reality that has seized control over dialogue in the United States, there’s no room for expressions that may offend the Israeli occupation.”

Calling out the oppressive policies in Israel, advocating for Palestinians to be respected, and for Israelis and Palestinians alike to have peace and freedom is not antisemitic. @CNN, we all have a right to speak up about injustice any and everywhere. @marclamonthill https://t.co/YT49WCxVbo

CNN firing Marc Lamont Hill is a disgrace. Criticizing Israeli occupation is not antisemitic. Rather, it's the result of understanding & bearing witness to decades of brutality, subjugation and apartheid that has no regard for international law. What happened to #FactsFirst?

“Hill’s firing is rash at best and a cowardly, dangerous precedent at worst. It’s disturbing not just as a capitulation to disingenuous critics but also because it’s another step toward recasting all speech about Israel’s brutality as anti-Semitism—or, in this case, a call for ‘Jewish genocide.’”

These reactions, as well as the too many others like them, were expected,  at least by this writer.

In 2010, I took a video of Helen Thomas that Rabbi David Nessenoff couldn’t get the media to cover and made it go viral by publishing it on my site, on Breitbart’s Big Journalism, Breitbart video, and submitted it to the Drudge Report where it was picked up.  The mainstream media covered the story by claiming Thomas was pushed out of her job because she criticized Israel, which is a lie. Thomas’ career-ending comment was telling the Jews to, “Get the hell out of Palestine” and to, “Go back home to Germany and Poland,” an apparent reference to the Holocaust and most definitely anti-Semitic.

Thomas’ statement is still being described as criticizing Israel. For example, in 2017 Charles Lewis former investigative producer for ABC News and the CBS’s 60 Minutes recently created a new website to honor “independent” journalists. One of the site’s initial honorees was Ms. Thomas. In their chronology of her career the site reported:

Sadly, just like Helen Thomas, history will say that CNN fired Marc Lamont Hill for making controversial comments about the Israeli-Palestinian conflict. And the real reason for his release  Antisemitism will be forgotten.

Instead of firing Marc Lamont Hill CNN may have done better by exposing him. They should have let Jake Tapper interview him about his statement with permission to have at him (generally interviewers of all networks are a bit softer on colleagues). I know many of my conservative friends disagree with me, but Tapper is straight down the middle journalist, reporting on truth rather than his personal opinion. Tapper has exposed anti-Semitism in the past giving running twitter commentaries exposing Louis Farrakhan’s Jew-hating speeches as they happened and as one of the first in the mainstream media to out Linda Sarsour as a hater.

With one interview of Marc Lamont Hill, Jake Tapper would have exposed Hill’s history of Antisemitism and would make him answer questions that would reveal the truth of Marc Lamont Hill’s UN address,  it was anti-Semitic hate speech. But Hill will be falsely remembered in perpetuity as being fired by CNN for making anti-Israel remarks