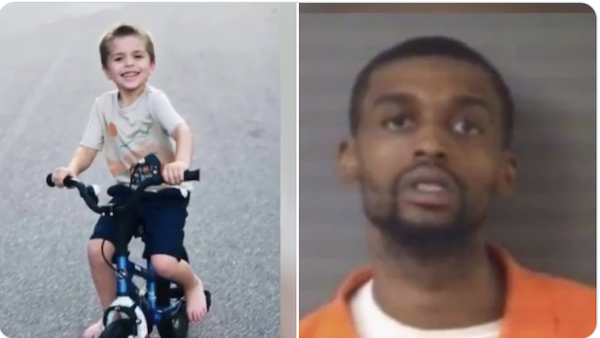 The frustrating thing is that you just KNOW this would be ALL over the news if the racial dynamics in play were reversed. But when the guy pulling the trigger isn’t white, or a cop, is it even newsworthy? Apparently not to the ‘mainstream’ US networks and papers. At the time of writing, this story has been picked up in the UK, and by some right-of-center or niche crime sites, but the major US outlets are not coming up on a web search of this story. A man who executed a 5yo boy for the crime of accidentally riding his bike on the guy’s lawn should be big news, but it’s not.

It began as the most ordinary scene you could imagine.

A little boy was riding his bike in his own yard. He was only 5.

Darius Sessoms walked up to his neighbors kids who were riding bikes outside their home, placed a gun to this 5 year old boy’s head & executed him in front of his two sisters for accidentally riding his bike on his lawn. Not a peep from the national media.https://t.co/pDKws1P3ZA pic.twitter.com/tvXc5VKKGm

North Carolina police have charged a neighbor with the murder of a five-year-old boy who was riding a bike in his own yard when he was shot at point blank range on Sunday evening.

Darius Sessoms, 25, was taken into custody by Wilson police around 24 hours after he allegedly approached Cannon Hinnant in front of the young boy’s father’s house at 5:30pm and shot him in the head.

Sessoms lived next door to the family, and the killing is not believed to be random. Neighbors claim he had dinner with Hinnant’s father Austin on Friday and had been over at the house earlier on Sunday.

The motive for the killing is still under investigation, but a GoFundMe established by a family member says that the young boy rode into Sessoms’ yard.

‘Sunday, August 9, 2020 a sweet soul named Cannon Hinnant was taken from this world over a senseless act,’ it reads.

‘A beautiful 5 year old baby boy riding his bicycle was shot by his neighbor point blank in Wilson NC. One minute he is enjoying his life, the next it all ends because he rode into his neighbor’s yard.’ –DailyMail

Nobody expects to see a five-year-old boy gunned down in cold blood before his first day of kindergarten. But here we are.

Talking about injustice has become something of a national pastime.

Could we maybe start talking about why some of us see life as being so cheap that ending a life has become little more than a transactional act for so many among us?

If a man raises a gun at a cop and gets killed in the process, cities burn.

If a grown man puts a bullet in a five-year-old’s head at point-blank range, nothing but crickets.

We’ve got a bass-ackwards understanding of what being a ‘tough guy’ really means. We really need to recalibrate it. We’d live in a very different world if we measured our ‘tough guy’ standards against this