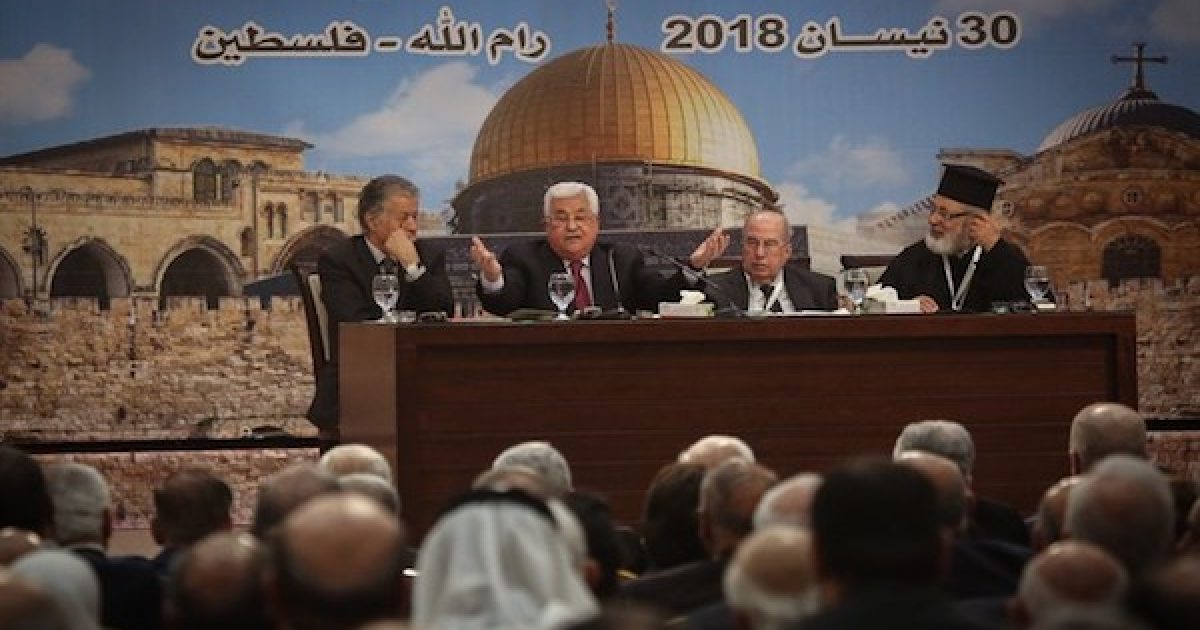 Palestinian President Mahmoud Abbas bloviated on Monday that the Holocaust wasn’t caused by Antisemitism, but by the way Jews lent money and that today’s Jews aren’t really Jews anyway.

The Times of Israel reported that while addressing the first session of the Palestinian National Council in two decades, the supposedly moderate terrorist Abbas delivered what he called a “history lesson,” which sought to disprove the 3,000-year-old Jewish connection to the Land of Israel.

Abbas claimed that the Holocaust was caused by Jewish “social behavior” such as charging interest and other “financial matters.” Israel was created as a European “colonial project” and has “nothing to do with Judaism.”  And that the Jews weren’t really Jews (does he mean I fast on Yom Kippur for nothing?).

Saying that the Jews behavior caused the Holocaust is a change from the Palestinian leader’s doctoral thesis written for Moscow’s Oriental College. In his thesis, Abbas raised doubts that gas chambers were used for extermination of Jews, and claimed that the number of Jews murdered in the Holocaust might be “even less than a million.” Abu Mazen claimed that the Zionist movement had a stake in convincing world public opinion that the number of victims was high; thus, it would achieve “greater gains” after the war when the time came to “distribute the spoils.”

Also in his college paper, Abbas claimed that Zionists prevented the Jews from being saved from Hitler:

“It might be imagined that Zionism would do all it could, materially and otherwise, to save the Jews, or at least to keep them [alive] until the end of the war. It might have been expected that it would arouse world public opinion and direct its attention to the massacres carried out against the Jews, so that the governments would act to rescue them from their bitter fate.” But, stated Abu Mazen, “what Zionism did was the exact opposite of what could have been expected”

Abbas, who next week begins the 14th year of his 4-year-term told the Palestinian National Council that Adolf Hitler, “facilitated the immigration of Jews to Israel by reaching a deal with the Anglo-Palestine Bank (today Bank Leumi) under which Jews who moved to the British Mandate of Palestine could transfer all their assets there through the bank.”

He also used a common anti-Semitic canard that Ashkenazi Jews (from Europe)  are in fact descended the Khazars a tenth-century nomadic kingdom in eastern Europe that some believe converted to Judaism en masse, instead of the ancient biblical Israelites. The problem is there’s no archeological or genetic proof that this claim has any truth.

But by making this claim in his fake history lesson,  Abbas says that Ashkenazi Jews (who account for about 80% of total Jews)  have “no historical ties” to Israel. “Those who sought a Jewish state weren’t Jews,” he told the audience, thus Israel “has nothing to do with Judaism.”

The latest speech by Mahmoud Abbas is just further proof that the Palestinian leader, who raised the money for the Munich Olympics massacre and gives blood money to terrorists who kill Jews,  has absolutely no interest in making peace. Also that governments in Europe who support Abbas’ hatred has no desire for a peaceful solution