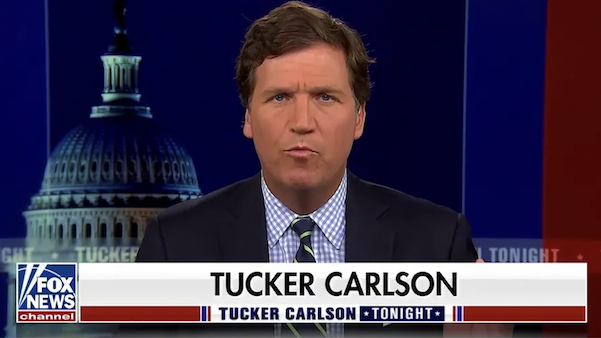 As part of the left’s apparent effort to foment violence, bloodshed, and possible civil war, several liberal maggots falsely blamed Tucker Carlson for a mass shooting in Buffalo. A self-described white supremacist reportedly shot 13 people, 10 of them fatally.  The majority of the victims turned out to be black.

Buffalo Police confirm that an “assault weapon” was used in the massacre. 11 victims are black, two are white. The police believe the attack was racially motivated.

Instead of blaming the gun, the Second Amendment, or Donald Trump, as they usually do, liberal maggots blamed… wait for it… Tucker Carlson.  The reason?  Because of a manifesto left by the shooter:

According to BNO News:

A 106-page online manifesto, believed to have been uploaded by the shooter, explained that he was motivated by a conspiracy theory that white people are being replaced by other races. In the document, he says he is 18 years old and a self-described white supremacist and anti-semite.

“If there’s one thing I want you to get from these writings, it’s that White birth rates must change. Everyday the White population becomes fewer in number,” the document says. “To maintain a population the people must achieve a birth rate that reaches replacement fertility levels, in the western world that is about 2.06 births per woman.”

Someone posted the manifesto online, and yes, it’s pretty disgusting:

The guy who is responsible for committing the shooting at the Tops on Jefferson in Buffalo is an absolute racist lunatic pic.twitter.com/DM0I8KhSAQ

Naturally, scum-sucking left-wing maggots instantly took to social media to spread their hate and lies, no doubt hoping someone would try to murder Tucker Carlson:

The Buffalo killer’s manifesto reads like a job application for a junior producer on Tucker Carlson.

And no, I’m not being flippant.

No, you’re just being a jackass.  Like always.  Eat any babies lately?

More blood on the hands of @tuckercarlson and @foxnews this killer used their racist talking points to justify killing 10 people. Carlson won't stop because as he explained to the NYTimes, it's good for ratings. Lives be damned. As Carlson will be at judgement day. https://t.co/fse5bRvEbN

The Buffalo shooter reportedly believed in the “great replacement theory,” a white nationalist conspiracy theory that Tucker Carlson has defended on his show https://t.co/XpDcB1moew

White 18-yo drove for hours to massacre Black shoppers.

The gunman who killed at least 10 people in Buffalo is a self-described white supremacist who advocates for the Great Replacement Theory.
He left a manifesto. See if you can tell the difference between it and standard fare on the Tucker Carlson show. https://t.co/ScoxO1NG5E pic.twitter.com/T5mZw9iV9C

BREAKING: FBI announces that they’re investigating today’s mass shooting in Buffalo as “racially motivated violent extremism.” The shooter left a manifesto citing Tucker Carlson’s “white replacement theory” as his motive. RT IF YOU THINK THAT @TuckerCarlson MUST BE INVESTIGATED!

The left’s apparent efforts to foment violence actually need to be investigated.

This is horrifying and it’s important to note: this is the rhetoric being broadcast by Tucker Carlson’s show on almost a nightly basis. https://t.co/gk1zLTyAaB

But, conservative judicial activist Mike Davis said the attacks are based on lies.  Of course, since they come from liberals.  According to Davis, the manifesto “cites the internet (specific websites) as his inspiration (not TV)—and has an antisemitic meme attacking Fox News.”

Gee.  Why aren’t we surprised that scum-sucking liberal maggots would lie to foment violence, bloodshed, and possible civil war?  Answer: We’re not.  Because that’s what they do.

And for those who think even more stringent gun control is the answer, Breitbart reported:

New York has some of the most stringent gun controls in the nation, including universal background checks, a “high capacity” magazine ban, an “assault weapons” ban, a permit requirement to buy a handgun, a red flag law, gun storage requirements, “ghost gun” regulations, and a prohibition against gun possession by felons, among other controls.

Do liberals REALLY want a second bloody civil war?  Garbage like this is enough to make one think they do.