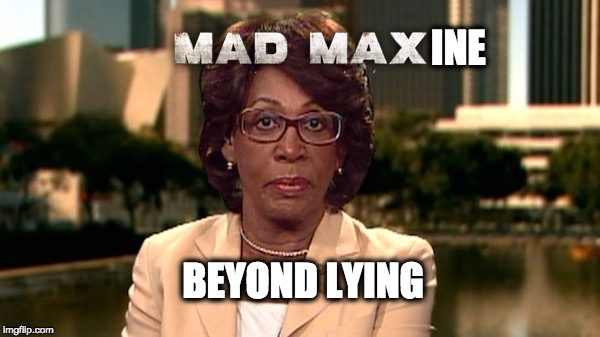 Wacko Waters also believes the bogus Trump dossier produced by a former British agent for the President’s primary opponents which not only has been proven bogus, but includes an act that a germaphobe like Donald Trump would never do–but that doesn’t bother the congresswoman from California. But since Maxine Waters is dead set on seeing Trump impeached she says that the United Kingdom has evidence  [the dossier] that proves collusion between Russia and the Trump campaign:

Even the leading Democrat on the House Intelligence Committee  Adam Schiff (D-Hack) acknowledges that there’s still no evidence of Russia-Trump collusion yet. But Maxine must be a psychic, or perhaps the stupid fairy sprinkled stupid dust on her (and have done so every day of her life).

I really do think that this president could be impeached. I want people to follow what is going on. The president would like us not to focus on Russia not to focus on the Kremlin not to talk about Putin but it’s inevitable it is happening and Michael Flynn is taking us closer to that conversation with the investigation that’s going on about him and speaking of Michael Flynn on the the new information that’s come out obvious that the Trump campaign the Trump incoming campaign beat the transition team did vet him before hiring him to be the national security adviser for the Trump White House.

When Waters was caught with her hand in the congressional cookie jar, helping an unsound bank (OneUnited) receive government aid– to help her husband who was an officer and stock-owner of the bank, Waters found a way to lie and blame it on her grandson. With her latest claims about Trump and Pence Mad Maxine Waters proves lying is as natural to her as breathing is for the rest of us.